A University Times investigation has revealed that members of a group of between 25 and 30 students, alumni of the private South Dublin schools Blackrock College, CBC Monkstown and Mount Anville wreaked havoc on Trinity’s Snowsports Club’s annual ski trip in the week prior to the start of term.

It is clear that the French police were called at least twice to the Les Deux Alpes resort, near Grenoble, where both the 300+ strong DUSSC contingent and the separate group were staying. Both the DUSSC trip and the external trip were ejected from the hotel by gendarmes after a swastika was daubed on the wall of the third floor of the hotel with a two-inch thick paint marker. Displaying a swastika is punishable by a custodial sentence in France.

A third year Trinity student was assaulted by four of the group. The four males entered her room as she and her two female room-mates slept.

The victim, who does not wish to be named, spoke of her experience with The University Times. “Four of them came into my room while i was asleep, woke me up by picking me up and throwing me down on the bed, generally being rough. One of them masturbated at me. They left me in tears.” The victim added that the DUSSC committee were very helpful throughout her ordeal and qualified her contribution to this story, saying “they were so sound about this whole thing”

The Junior Dean is conducting an investigation into “a series of  alleged incidents  which took place at Les Deux Alpes resort in which members of the Dublin University Snow Sports Club were staying, as well as other  Trinity students, independent of the DUSSC trip, and other Irish students.”

One of the perpetrators accidentally left his mobile phone in the room during the assault. He later returned and apologised to the victim while his friends jeered from the door. In his absence, the phone had received a call from a first year Business and Computing student who had attended Blackrock College. Speaking to The University Times, this student denied any knowledge of the events, although he acknowledged that following the publication of details of the assault in the Sunday Independent, he had corresponded with the other students who had been on the parallel ski trip.

He also acknowledged that the fact that his name showed up on the phone indicated that the perpetrators were from his ski trip group.

Students on the DUSSC ski trip, in interviews with The University Times, described the behaviour of the group as “sociopathic”, reporting a “spend-off” between two former Blackrock students, one from Trinity and one from UCD, in which they competed to see who could spend or waste the most money.

Tactics included throwing a BlackBerry down a mountain, buying ten pints and emptying them immediately, smoking a €50 note, using a €20 note as a cigarette paper, and paying a barman €50 to fasten ski boots.

When a resort security guard approached one of the contestants to notify him of a €2,000 fine relating to damages, he reportedly took a €50 note out of his wallet, said “I eat this shit for breakfast” and promptly did so.

A video of one of the group, Paul Quinn, a Commerce student in UCD, surfaced on YouTube in the days following the Ski Trip. Visibly inebriated and clothed only in thermal underwear, Mr Quinn states that he “fucked [his] phone down the river”. When asked why, he states that “I was trying to impress my friends… I was trying to impress Conor Williams because he’s a ledge”. He also remarks that “I hate Trinity. I don’t even hate Trinity. I say I hate Trinity because I’m not intelligent enough to get into it.” He then whispers “I’m just a stupid UCD c*nt.” 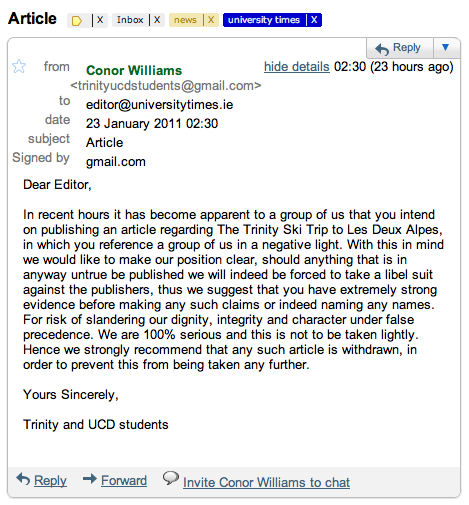 The email Conor Williams and others sent to The University Times editor, apparently unaware that Williams’ name would show up

During the night before this newspaper went to print, the editor received an email from Conor Williams from the email address trinityucdstudents@gmail.com. This email, pictured above, threatens legal action in the case of an article portraying the group “in a negative light.” It appears that Mr Williams intended the email to be anonymous but failed to realise that his name would appear in the “From:” field.

When The University Times spoke to Mr Williams, he said that the article was written by “a group of us… too many to name”. He denied any involvement in the spend-off, the assault on the Trinity student, and vandalism in the hotel.

When asked if he was under investigation by College, Mr Williams said “if I am, I don’t know about it.”

Well-placed College sources have told The University Times that five students, including Mr Williams, are facing disciplinary hearings from the Junior Dean following their behaviour on the trip.

After receiving this information, The University Times asked Mr Williams again if he was under investigation. He claimed that “this is a personal matter” and that he had “already had to refuse comment on this”

Mr Williams said he has no regrets following the trip, remarking that “everyone enjoyed themselves.”