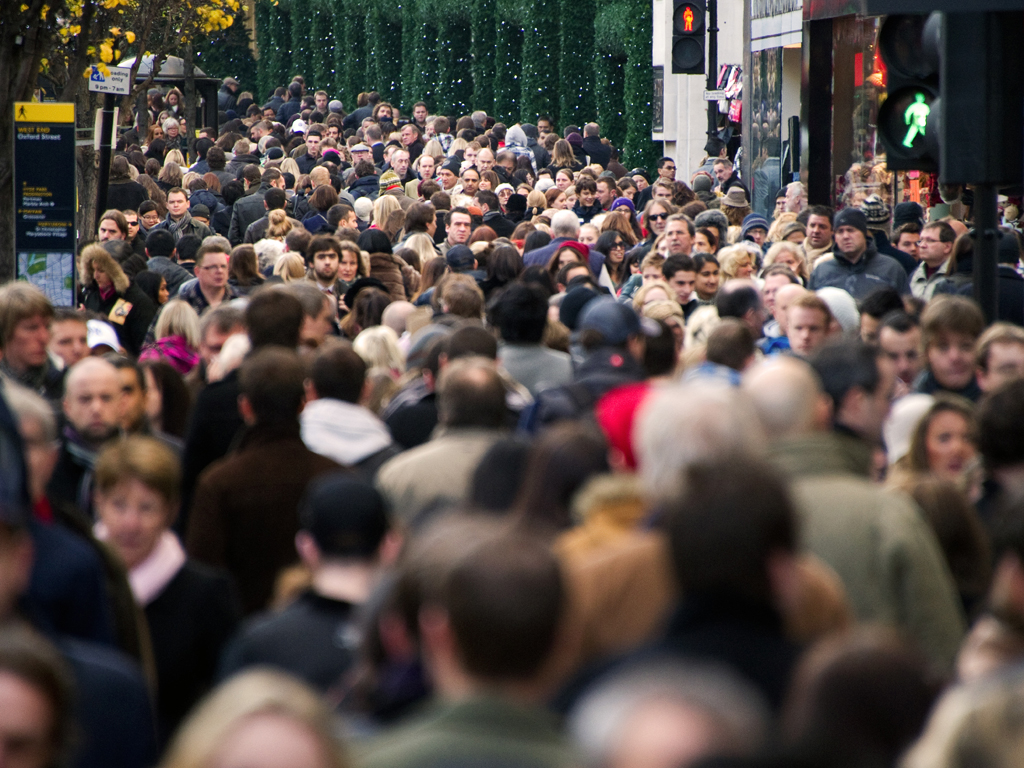 In a now famous stand-up routine, Bill Hicks, the viciously articulate comedian, begins a section of his show with an unusual imperative to all those involved in marketing and advertising. His advice? “Kill yourselves”. Of course, the audience laughs along, assuming this to be just another piece of shocking rhetoric Bill is known for. But he goes on:

Seriously though, if you are, do. Ah, no really, there’s no rationalisation for what you do and you are Satan’s little helpers. Okay – Kill yourself, seriously. You are the ruiner of all things good, seriously. No this is not a joke, you’re going “there is going to be a joke coming” there’s no fucking joke coming.

At this point one begins to suspect that Bill’s routine is descending into a rather mean, hate-filled rant. However, as with all great comedians, he averts this danger by revealing a piercingly perceptive critique of contemporary society. He continues:

I know what all the marketing people are thinking right now too – they’re saying: “Oh you know what Bill’s doing, he is going for that anti-marketing dollar. That’s a good market, he’s very smart.”

Oh man, I am not doing that. You fucking evil scumbags!

Goddamn it, I’m not doing that you scum bags. Quit putting a dollar sign on every fucking thing on this planet! “Oh the anger dollar. Huge. Huge in times of recession. Giant market, Bill’s very bright to do that.”

God, I’m just caught in a fucking web. “Ohh the trapped dollar, big dollar, huge dollar. Good market – look at our research. We see that many people feel trapped. If we play to that and then separate them into the trapped dollar….”

What Bill Hicks does here is articulate in a few lines, an inherent danger of our consumer society: the impossibility of escape. Every thought, every idea, every value, every attitude, regardless of whether they contradict each other, or whether they undermine the system itself, can be produced en masse, packaged, and sold for a profit. There is no ‘outside’ the system for us currently living in the developed western liberal-capitalist democracies.

What does this mean exactly? Well, firstly, it is the idea that consumerism has become our reality, to the extent that we don’t even see it. We are bombarded with around 3000 ads per-day, literally almost everywhere we look – there is targeted marketing, guerrilla marketing, ambush marketing, viral marketing, product placement and more; each one yelling at us to live our lives a certain way, with a certain look and attitude (Make Believe, Eat Fresh, Have It Your Way, Be Stupid, Make the Most of Now, Impossible is nothing).  This has led to a situation where the scope for expressing oneself outside the market is getting increasingly narrower and more difficult.  That is, our world is one in which if you want to express something, you buy the product that does this best. Power? A BMW. Love? A diamond ring. Coolness? An iPhone.

This has happened because advertisers have become true experts in creating an imaginary virtual world to surround products and bestow upon them meanings that reach far beyond the materials that compose them as well as the use to which they are put. So much so that it is almost impossible, even if you are aware of it, to ignore these meanings. Products, or as we now call them brands, are bought and sold for far more than their functional value. Consumption has moved into the realm of symbolic meaning.  Recall any advertisement for a car you recently saw on television. They have no shame in spouting off philosophical aphorisms about the true and proper  way to live life; to shun fear and seize the moment, and the way to do these things, is to own their specific brand of car. Yet, strip away the epic music, the deep voice, the attractive actors and all you are left with it is a vehicle, with four wheels. The same as every other damn car on the planet: transporting you from one place to another, usually to buy something else.

The development of this type of advertising began in the early twentieth century alongside the birth of mass consumerism. Up to this point ads had been more or less factual and informative. So an ad for shoes would go something like: buy these shoes, they are made from good quality leather and will last you a long time even if you use them every day. However, the late nineteenth and early twentieth century’s saw a crisis in production; new technologies had resulted in production of more and more goods, but there were not enough people to buy them. The corporations and the businesses quickly adapted by convincing people to buy things they didn’t need.

Thus the shift from a needs-based culture, to one of unmitigated desire took place.  In the words of prominent Wall Street banker Paul Mazer, in the 1920’s: “People must be trained to desire, to want new things even before the old had been entirely consumed”. Sigmund Freud’s nephew, Edward Bernays played a large role here as he realised that if advertisements appealed to peoples emotional sense of individuality and self esteem, they could be far more effective in convincing people to buy what they desire in order to make themselves feel a certain way: glamorous, unique, strong, adventurous, successful, etc. This has not changed much in the past century, only become more and more ubiquitous and, of course, sophisticated. The path to these ultimate human desires, so consumerism says, is mediated through the market.

This is not, however, to say that there has not been awareness and rejection of this process. We are no fools. In popular culture, resistance was represented by the Beat’s of the 1950’s; Jack Kerouac, Allen Ginsberg, Bob Dylan, among others, all expressed their disdain for the world of constant consumption; the world in which people vainly hoped that the next purchase would finally satisfy the desire for more. The same can be said of the counter-culture movement of the 1960’s led by The Beatles and The Stones, and the punks of the 1970’s. Each of these underground movements rejected the image of the man in the suit with the briefcase working behind a desk, devoid of creativity and passion.

However, the great strength (or danger) of capitalism, the one that Bill Hicks so accurately pointed out, was its ability to absorb dissent. Each of these movements may have started out as a philosophically deep and radically ambitious assault on the very bases of consumerism in the Western world , but eventually, and subtly was turned into a set of consumable products—a style of dress, a type of haircut, and a collection of record albums. A ‘hippie’ today is as much about style as principles.  Today, the ‘Surfer’ way of life has been similarly co-opted by certain brands. The principle of profit-maximisation, a cornerstone of capitalism, does not label conformist dollars and counter-culture dollars: they are all the same to them.

As well as this ability to co-opt ideas and attitudes regardless of their content, consumerism also retains the ability maintain an oxymoronic principle: everyone can be unique.

Consumer culture is acutely aware of the universal hunger for differentials – that is, to be different, to reject the boring status quo – and provides an artificial form of exclusivity in the brand. The genius of branding has been to disguise the undesirable conformity of consumption as its highly desirable opposite, distinction. So conformity is everyone striving for distinction in the same way. Advertising teaches and advises, not rigid adherence to the tastes of the herd, but vigilant and constantly updated individualism. We consume not to fit in, but to prove that we are different, that we are rock `n’ roll rebels, each one of us as rule-breaking and hierarchy-defying as our heroes of the 50’s, 60’s and 70’s. This imperative of endless difference is today the genius at the heart of American capitalism; an eternal fleeing from “sameness” that satiates our thirst for the New with such achievements of contemporary civilization as an infinite amount of brands of more or less identical beer, cigarettes, clothes, cars, cosmetics, shoes and everything else.

Advertisers want us to want to try to escape from the system, because it is through attempting to escape the system, that we become trapped. A friend of mine doing research in Marketing took the subculture of motorcycling as a case study. This is a world synonymous with rebellion, and freedom; a world with no restrictions, no rules and certainly far removed from billboards and shopping malls. However, the paradox that arose from his research was that escape from the ‘status-quo’ really just led to confinement. That is, although motorcyclists may experience momentary escape from confinement while motorcycling, they are faced with the reality that “the practice necessitates consumption which in turn forces him to engage with the institutional side of life. He realises that the object of escape is also the object of confinement.” That is, he still needs to return to the Harley Davidson shop every week or so to buy new parts for his bike, new biker-gear, insurance, fuel and so on. This serves as a harsh reminder of the practicalities of escaping the confines of capitalism through any form consumption. So yes, advertisers want you to escape, and they will be there waiting for you when you do, with some new clothes and a cup of coffee.

The same goes for any high risk activity. The motivation to go sky-diving, base jumping, white-water rafting, on a safari, or through the jungle, is to escape the confinement of our structured and safe world, but like everything else, these too now come pre-packaged, with tour guides, hand books and travel insurance. We can delude ourselves into feeling we are escaping, but we are merely dipping our toes in the water while each arm clings on to the safety of someone in a suit, an email away, with the paperwork that proves you are there.

When Bill Hicks, more than twenty years ago, raved against the audacity of consumerism putting a dollar sign on everything, he was on to something. He was calling out the sneakily manipulative form of consumerism that is at once telling you to be different, while offering everyone the same set of choices; that laughs in the face of dissent and only sees opportunity for exploitation. Escape, as shown, is difficult. But escape is not always necessary. A start is awareness and detachment. Two Stoic virtues extolled by Seneca and Marcus Aurelius as well as the existentialists – Sartre and Camus – of the twentieth century. They say if it is not possible to influence the world, it is at least possible to moderate the worlds influence on the self. We must realise that Coca-Cola doesn’t make you have more fun; that Nike doesn’t make you more athletic; that a BMW doesn’t make you more powerful. These are internal attributes and can be exhibited and practiced without owning a single possession.