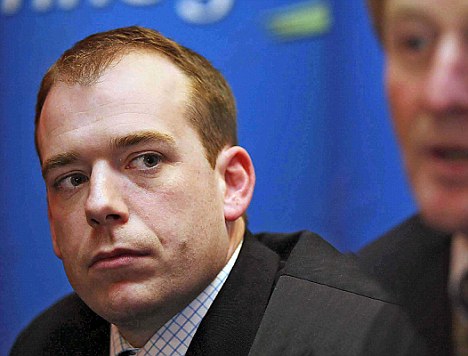 Darren Scully talks as if he has given great thought to his words — as if they are a result of some kind of long period of reflection. But I found that you have to step back and ask yourself whether this is some kind of artificial and altogether illusory confidence, or whether he really is sure that what he’s saying is exactly the message he wants to come across.

Take, for instance, two years ago. On November 21st, 2011, Scully appeared on The Late Show with Niall Boylan on 4FM, having emailed the producer beforehand some of this thoughts. In his email, he said that “as a public representative I have taken a decision some years back to no longer deal with representations from immigrants coming from African countries”, the majority of whom he found “very demanding and very quick to play the race card”.

When I spoke to Scully last Friday in Áras Chill Dara, the head office of Kildare County Council in Naas, he seemed sure that this was just a poor choice of words: “Time is a great tool to look back on events. And in hindsight and reflection, yeah, I chose my words very, very badly. The big lesson from that is that in politics you’ve got to choose your words carefully. You can get a message across but you’ve got to choose the words that describe that message very, very carefully. So, yeah, I paid a very high personal price for my comments.”

Scully appeared on the Niall Boylan show to reiterate his comments from the email with great certainty, and the following morning, he appeared on local Kildare radio to do the same: “I just made the decision, a conscious decision, earlier this year, that I just was not going to, myself personally, was not going to take on representations from black Africans.”

That marked the third time within 24 hours that Scully had reiterated his stance in relation to black Africans.

Yet, by six o’clock that evening, he had resigned as mayor of Naas, and had apologised unreservedly: “I realise now that my remarks were open to an interpretation that I did not intend. I abhor racism in all its forms.”

The following February, Scully lost the Fine Gael party whip. Just recently, he has been reinstated by the party, and selected by a Fine Gael convention to stand in the upcoming local elections.

The question then, I think, was to ask what exactly he did intend. On Friday, Scully outlined exactly that: “To be honest, I had been listening to people on the show, I had been listening to people on various media, and basically what happened was, I thought it was becoming very one-sided. The debate was becoming very one-sided when it came to immigration to this country. I was listening to people coming on to the radio, basically giving out about the country, giving out about the lack of services for them, and I suppose I was saying, as I said on Niall Boylan on the night, there was a case here where people who had been given council houses here, and they weren’t happy with them, even though what they were going to get in their own countries was minuscule compared to what they were being offered here …”

That marked the third time within twenty-four hours that Scully had reiterated his stance in relation to black Africans.

Later on, Scully went in to more detail about his reasons for broadcasting his views: “I think it was important for people to know that was the way I felt. I suppose in a way one of the greatest faults I’ve had in politics is my honesty. I’ve been extremely honest as a politician over the years. I’ve always told people my views, my opinions, what I think of something. And I think that has come back in a certain way — I don’t know do people find it difficult with a politician giving an honest opinion or an honest view or … obviously they do because you can see in this country you know that people say ‘oh just play it safe. Say nothing. Keep the head down. Say nothing.’ ”

Scully claims, as he did in the radio interviews, that over his seven or eight years as a public representative, he has been subject to unreasonable demands from the black community in Ireland: “I had met a lot of people, particularly from the black community, who were looking for a lot — demanding a lot — and I was just very unhappy with it — the way they were dealing with it.”

Yet Scully is quick to address some of the positives that came out of his 2011 transgressions: “After the event, the good thing that came out of all this was that I was contacted by a lot of groups and organisations, particularly from the African community themselves. I met with a few individuals, and it’s kind of funny: I met with one gentleman who was from Uganda, and he said to me if you had said that you wouldn’t deal with any more Nigerians, you would have been perfect, you know? He said ‘we’re Ugandans and we hate Nigerians’. Same way other people from other African countries say ‘we hate Nigerians’ because of the way they come across – their cultures, their traditions.”

He said to me if you had said that you wouldn’t deal with any more Nigerians, you would have been perfect, you know? He said ‘we’re Ugandans and we hate Nigerians’.

To him, perhaps there is a lack of education and understanding as to “the different personality traits and traditions and so on”. It became clear to Scully soon after his KFM interview that his position was untenable: “I think it was pretty much the following day after I listened to the interviews back myself and after talking to some people who rang me to discuss it. Some close friends — non-political friends — had rang me to discuss the situation and I suppose really that you can’t … when you sit down and think long and hard about things, yeah I did generalise. You can’t generalise, the same way you can’t generalise about politicians — people do it all the time, they generalise the whole time. What made my position untenable to myself was that I was elected as the first citizen of Naas, so I was elected as the representative of the town.”

“I said black Africans. Now I really shouldn’t have even said black Africans. I should have said certain people from a certain part of Africa. That’s what I should have said. And the mistake was that I generalised. I said all black Africans. And that was a mistake. But I had issues, issues with certain nationalities, which I’m not going to discuss now. There’s no point. Certain nationalities from the continent of Africa who are very demanding. And I had been thrown the race card several times. Now, I don’t like that. I don’t like being bullied and threatened by any person. And that’s what really kind of annoyed me.”

Central to the debate during his KFM interview was the role of public representatives in society and whether they should represent all the people. Scully was having none of it: “The general populous get confused as well about what a politician is … Why do we have multi-seat constituencies if that’s the case? … I think it’s just nice political language to say that: we’re here to represent all of the people. But I don’t think that sums up politics in any democracy to be quite honest. … To say that they represent all of the people, to me that’s just, that’s you know very clappy handy, hold hands kind-of language. It’s not being realistic.”

Aodhán Ó Ríordáin, a Labour Party TD, reported on the day of the controversy that he had reported Darren Scully to the Gardaí for incitement to hatred. When asked if it was the right thing to do, Scully was definitive: “No it wasn’t the right thing to do. It was political grandstanding. Aodhán Ó Ríordáin doesn’t know me. Aodhán Ó Ríordáin made a false statement to the media. He said that he had gone down to the Garda station, which he hadn’t done. Aodhán Ó Ríordáin, all he had to do was pick up the telephone and talk to me, which he didn’t bother his arse to do. … Yeah, and I thought it was Aodhán Ó Ríordáin trying to get some cheap political press to get himself on the news that night, and trying to, I don’t know, pass himself off as being some crusader or white horse, or whatever. But I was very disappointed in him and I know members of his own party were very disappointed with him for what he did.”

He also accused some media outlets, particularly the Journal, of using journalistic license, and misquoting him: “Yeah. I said a comment there with the Journal. I said I was very sorry about what happened. I gave a frank, open and honest apology … I genuinely meant it. And then the journalist at the Journal said ‘oh yeah but Darren some organisations or groups are still looking for you to be barred from politics’. Like and I said ‘what’s going to make these people happy? Do they want me to be deported, next?’ You know, and then that’s what they use then in their headline: ‘Some people want me deported.’ I never said that, you know? That belittles the whole interview. That’s why I was really annoyed when I saw that interview. They’re trying to make it out to be something that it wasn’t. They weren’t using my words to their questions.”

In the Journal article, Scully was quoted as saying: “certain sections of society who won’t be happy until I am, I don’t know, deported somewhere.”

I knew something was desperately wrong when the Boston Globe had rang me and the Sydney Tribune had rang me.

As to why he has been selected again, Scully thinks it has more to do with having served his time, rather than any Fine Gael-related tactic based on his local popularity: “The party felt that I had done my punishment. I served nearly a year and a half without the whip, and that I was genuinely contrite in my apology and that I was genuinely sorry for what I did and they came to me and they said ‘look, we would like to offer you the whip back, but it’s completely up to you’.”

With regards to the emotional and psychological impact, Scully said: “I knew something was desperately wrong when the Boston Globe had rang me and the Sydney Tribune had rang me and BBC Northern Ireland were sending down a camera crew from Belfast to interview me. … It was a big story for the media and I suppose with all that media coming to my front door, with my family being there, and then being suspended from and subsequently losing my job, and then obviously being contacted by the Gardaí, yes, it was a very difficult time.”