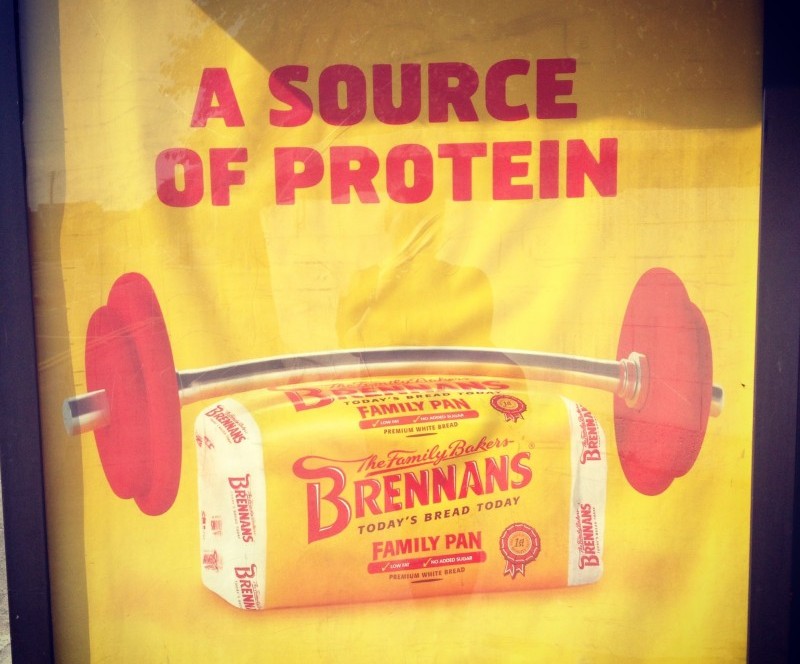 The image above is the latest advert from Brennans bread. It caught my eye at the bus stop for its blatant audacity. There is a large caption reading “SOURCE OF PROTEIN” and a picture of a barbell with weights on either side, an image most commonly seen in gyms. Brennans are obviously trying to push that “protein” and being “healthy” are associated with their product, white bread.

I checked it out; there are 3.4g of protein in one slice of Brennans bread, that’s 6% of your recommended daily allowance for men and 7% for women. But why doesn’t it mention that this is also high in refined carbohydrates? Why don’t Brennans elaborate on their inclusion of an image of an Olympic barbell?

Anyone who knows anything about health will tell you that white bread is not a good source of protein nor is it associated with health and gym activity but the subliminal message highlights a crucial point about advertising in the food industry.

HEALTH SELLS. The industry does absolutely everything they can to exaggerate the supposed ‘positive’ health benefits of their product, while downplaying any ‘negative’ effects.

I suppose, for a lot of college students, the war against the food industry and obesity is long down the list of social revolutions worth fighting for. Yet while our attentions are fixed upon issues of equality and the impending eruption of the Middle East (both exceptionally worthy causes) the food industry are toiling away in the background of the free market economy, silently corrupting and manipulating the way in which we understand food.

The warning signs are already in front of us. Two reports in 2014 have found that on average 4 in 5 adults over 50 are overweight or obese and 1 in 4 children in primary school are overweight or obese. Another study carried out by UCC and The Food Safety Promotion Board estimated the total cost of obesity to the Irish taxpayer in 2014 will amount to – get the Dr Evil face ready – 1.13 billion euro.

By taking these findings with a pinch of salt, you risk waking up one day to find yourself paying extortionate rates of tax to the government. You’ll be cussing under your breath when the headline of the newspaper reads “Health Minister requires an extra 2 Billion in funding to deal with nation’s obesity epidemic”.

Dr Donal O’Shea co-chair of the RCPI policy group on obesity and Director of the Weight Management Clinic at St. Columcille’s Loughlinstown has been a long term advocate of regulating the food industry and putting a halt to the cynical advertising targeted towards children.

Dr O’Shea criticizes Coca Cola’s advertising campaign of personalised bottles with names on them which is aimed at children, describing it as “personalised peddling to our kids”.

Companies that sell sugary cereals offer prizes of toys and access to theme parks for purchasing their products. Sports drinks companies get kids sports heroes to endorse their products.

And the “supersizing” of confectionary items which can be seen in Mars launching the Duo bar, – basically putting two bars in the one packet. Dr O’Shea explains, “This replaced the Mars king-sized bar but it’s not really meant as shareable despite what they say. The (food) industry knows that and it is their way of getting around that problem.”

We are now following a dangerous trend towards the US model of widespread obesity and education needs to be a starting point to combat the problem. In schools children are already taught the food pyramid, about eating lots of fruit and vegetables to remain healthy, but what they’re not taught about is advertising, something that is literally all around them, everywhere they go and attached to nearly everything they eat.  They’re not taught that when a packet says “contains fruit” in bold font it might contain 1% fruit, they’re not taught to be sceptical of the audacious promises made by food companies and they’re not taught that when their favourite footballer is eating a Subway sandwich on a TV advert that he is being paid to do so and it is highly unlikely that a meatball marinara is a staple of a professional athlete’s diet.

And it’s not just children, “healthy” advertising is everywhere and affects adults in a similar way. You can’t walk down the street, watch a game of sport, even surf the internet without being bombarded by advertisements trying to manipulate your thoughts and make you think a certain way.

Deceptive advertising and increasingly larger portions are not the sole contributors to obesity but they play a hugely significant role in sucking people into the supersize lifestyle.

The reason companies like Coke and Pepsi have pumped big money into fighting regulation, like New York mayor Michael Bloomberg’s attempt to limit the size of fizzy drinks sold as individual portions, is because they want to maximise profits. And the more people who are addicted to buying and consuming as much of their products as physically possible, the more money the companies make.

The Journal reported that 87% of the Irish public are in favour of the introduction of a “sugar tax” on heavily sweetened drinks, but with the lobbying power of the industry it’s hard to see politicians ever making this a reality.  That is despite the World Health Organization’s calls for immediate regulation of food industries across first world countries to slow down the astronomical increases in obesity rates.

It seems that every time a country tries to introduce restrictions on anything food-related the industry finds a loophole, or else bullishly bats it away with litigation and lobbying.

At this stage, the statistics are beyond frightening and we are facing a future saturated with saturated fat. As that future appears increasingly ominous, ordinary people must start standing up to the food industry by curbing habits on fast food and not tolerating exploitative advertising.