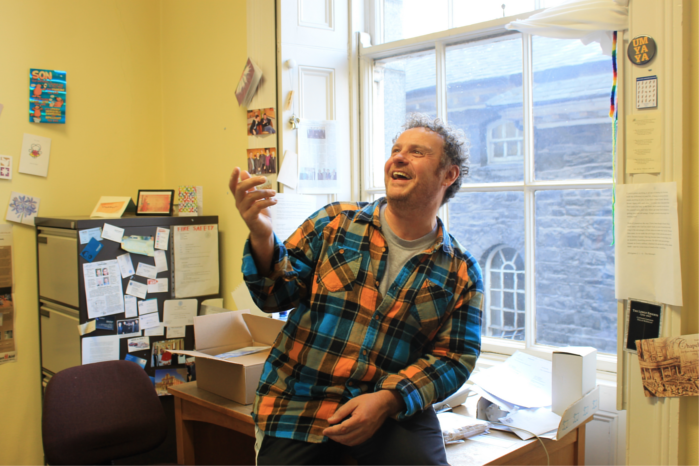 ‘You’re the journalist! You’re the one that’s going to make me famous!’ he jokes, casually propping his shoeless feet on the desk in his office, the four walls of which are smothered in rugby pin-ups and posters. ‘I wouldn’t say journalist’, I insist, and he is surprisingly no less enthused by the knowledge that his up-and-coming fame is in the shaky hands of an amateur at best. The initial pang of panic I feel quickly subsides as Julian ‘Jools’ Hamilton, the Methodist chaplain here in Trinity College, invites me to take a seat and it is then, and only then, that I begin to understand just one of the many reasons why students choose to come here.

The Chaplaincy at Trinity College may at first seem an unlikely place to spend your free time, yet, it is a sanctuary for a vast number of Trinity students. Despite it’s stony exterior, House 27 is a comfortable environment that offers students a place to de-stress, socialize and discuss any issues they may have with one of the four chaplains, each of whom represent one of the four main denominations of the Christian Church. Students may simply ‘pop in’ for a chat and within seconds of meeting Jools Hamilton, it’s easy to understand why. The Queens University graduate’s appearance does not match my expected view of a college chaplain. The loop piercing his left ear invites one to draw an all too obvious comparison to Irish actor Colin Farrell, and it is one which I briefly consider as the Methodist chaplain tries to provide me with a better understanding of the role of the Chaplaincy inside the college gates.

With four representatives of the Christian faith working both separately and collectively within the walls of the Chapel and House 27 in order to promote a deeper understanding of the Christian faith and spirituality, one might be of the mistaken belief that it is an exclusive organisation, however, it is not by any means confined to those who profess Christianity. It is instead described by Jools as a ‘welcoming and free social space’ where participation is encouraged and invitations extended to those of any or no religious affiliation. This view is echoed by students like Alex Crean, who sees the the Chaplaincy as more of ‘a social space’ where he can go on a regular basis with his friends to take time out and a place where there is no sense of exclusivity.

The organization of various activities and trips throughout the year allows students the opportunity to socialize, reflect and learn. Only last year, a group of students were afforded the chance to visit Israel and Palestine at a time when Israeli-Palestinian tensions were rising. This time around, a cultural immersion trip to India is on the cards during which the students will live with Muslim students and discover their way of living. These are just some of the larger scale activities organized by the Chaplaincy and help to reveal the Trinity campus and the Chaplaincy’s willingness and desire to engage with people of all faiths.

On a smaller scale, there are daily ecumenical services, Anglican book groups, lunch on Tuesdays and annual events such as God on Tap – an event in the sacred Pavilion bar where a guest speaker is invited to offer their opinions on a thought-provoking topic before students can then ‘grab a pint’ and ask questions. Though the different chaplains organize activities independently of one another, the chaplaincy is ultimately an ecumenical one and there is a certain emphasis placed on a ‘core’ identity whereby each denomination comes together and is seen as one. It is this core identity that organizes ecumenical events such as the planned visit to Ireland from Israeli and Palestinian students this year for a week of discussion on conflict transformation.

Jools insists that the Chaplaincy is not ‘a counselling service’

In the overall college structure the Chaplaincy is a student service with the chairperson of the organization taking his seat at weekly meetings of the Student Services Forum. Students have the freedom to meet with any four of the chaplains in a more private setting where they can seek guidance and advice on issues, stresses or struggles they may be dealing with stemming from college life or other sources. And whilst Jools insists that the Chaplaincy is not ‘a counselling service’ and it does not ‘pretend to be’, there is a somewhat unofficial process in place whereby students who have a mental health issue, may be referred by the Chaplains to the better qualified, college counselling service. The process works both ways and is important in providing a strong system of support for those who may be suffering with mental health problems.

The Chaplaincy ultimately aims to provide for both ends of the spectrum, the days being very much a balance of social events and more serious encounters which often result in days that can only be described as ‘gut-wrenching’. It is latter aspect of his job (though he views it more as a lifestyle when you exclude the phone calls, paperwork and emails) that Julian finds the most difficult yet it is one of the many reasons why he loves what he does, vowing that the best aspect of his ‘lifestyle’ is that no two days are the same. The Chaplaincy is a relaxing environment that aspires to be at the heart of college life, striving to assist students in any way it can throughout their time in Trinity.