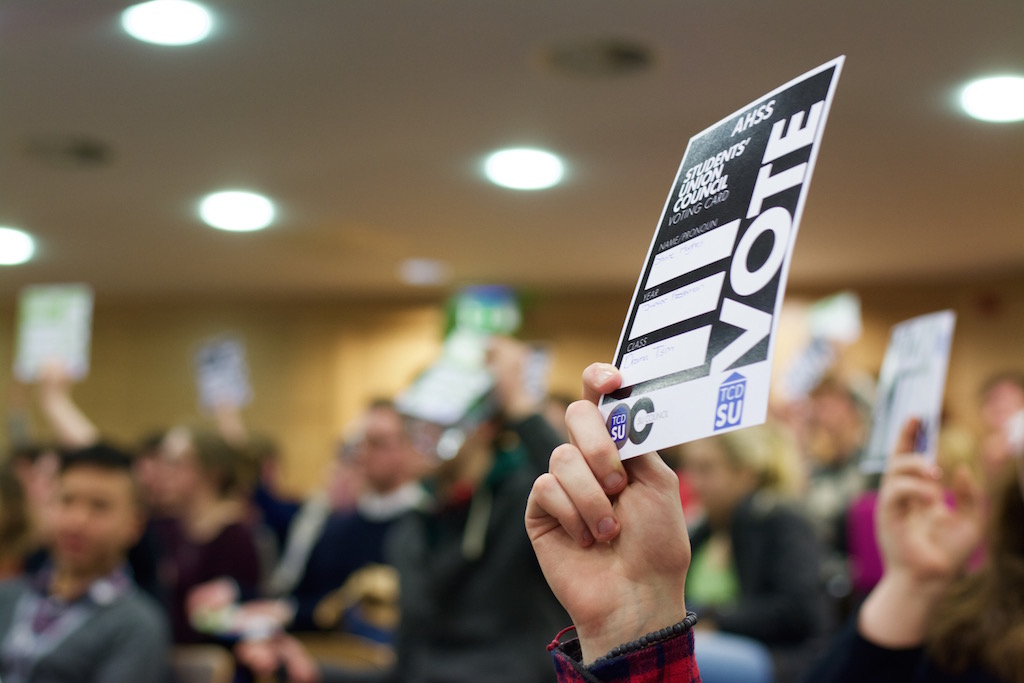 The Chair of the Oversight Commission (OC) of Trinity College Dublin Students’ Union (TCDSU), Jason Leonard, has been censured after being accused of having significant involvement in rumours spread last week about a candidate in the TCDSU elections.

Leonard was present when Domhnall McGlacken-Byrne, the President of TCDSU, brought a motion to censure him to tonight’s meeting of TCDSU Council. A motion to censure is described by the union’s constitution as the “strongest reprimand that Council may give an officer without calling for [their] impeachment”. McGlacken-Byrne noted that impeachment is reserved for “when an officer breaks the rules”, and that impartiality was not mandated for the position due to an oversight in the preparing of election regulations. On that basis McGlacken-Byrne proposed censure rather than impeachment.

Education officer-elect Molly Kenny then followed by bringing a motion to impeach. Leonard presented a prepared statement explaining the circumstances involved, in which he admitted involvement in spreading the rumour but raised numerous objections to the way this newspaper covered the events and directly referred to Edmund Heaphy, the Deputy Editor and Editor-Elect. He claimed that he did not play a “key role” like this newspaper suggested. The motion to impeach failed after a number of speeches were made against the motion, with only two in support.

Last week, Muireann Montague, a candidate for Welfare and Equality Officer, was fined by the Electoral Commission for rumours spread by her campaign manager, Dahnan Spurling, about another candidate, Conor Clancy, who went on to win the election. The rumours involved accusing Clancy of homophobia and lead to the subsequent firing of Spurling as manager. TCDSU subsequently released a formal statement, signed by all five candidates, condemning the spreading of “unfounded allegations”.

An unnamed member of Montague’s campaign team confirmed Leonard’s involvement in the controversy to The University Times: “Leonard heard the rumour from Muireann’s campaign manager and then went to tell people in a group chat where it was screen captured and brought to the attention of the EC.” They explained that the disciplining of Montague was a direct result of Leonard’s actions: “Well from what I gathered the whole reason Muireann got disciplined was because Jason spread the rumour to a group chat.”

“He was clearly team Muireann when he should have been impartial because of his role.”

Following these revelations, Leonard was asked to resign by several senior members of the union. He refused to resign on the grounds that, unlike in previous years, there is no stipulation that members of the Oversight Commission must remain impartial. Typically, Schedule 3, which is the document containing election regulations, contains such a stipulation. Commenting on the absence of this stipulation, Kieran McNulty, the chair of the Electoral Commission, which prepares Schedule 3, said that he was “working on an older document for this year’s Schedule 3, which is probably a mistake in crossover.”

It did not mention the OC and nobody at Council mentioned it when it was ratified by the reps.” He added that Schedule 3, as it stands this year, “does not mandate anyone but the EC and the Sabbatical Officers to be neutral.” He further added, however, that: “Bullying or anything which contravenes the [College] Dignity and Respect Policy should not be tolerated in any respect.”

A Twitter account set up during the elections, called “BleedTCD”, featured criticism of candidates running in the Leadership Race. Questions submitted by Leonard to The University Times Facebook page during this publication’s “Big Question” hustings event were, in many cases, identical to tweets posted on the account. A tweet published on the account, for instance, criticised Welfare and Equality candidate Louise O’Toole’s manifesto, saying it was an “NUIG 2011 era hot pink mess”.

Identical wording was used by Leonard in a question submitted to The University Times account. When the Twitter account was messaged with a query asking if Leonard was the person behind the account, tweets criticising Montague followed shortly after. Following a subsequent exchange between a University Times reporter and the person behind the account, the account was deleted. Leonard denied responsibility for the account in his speech at Council.