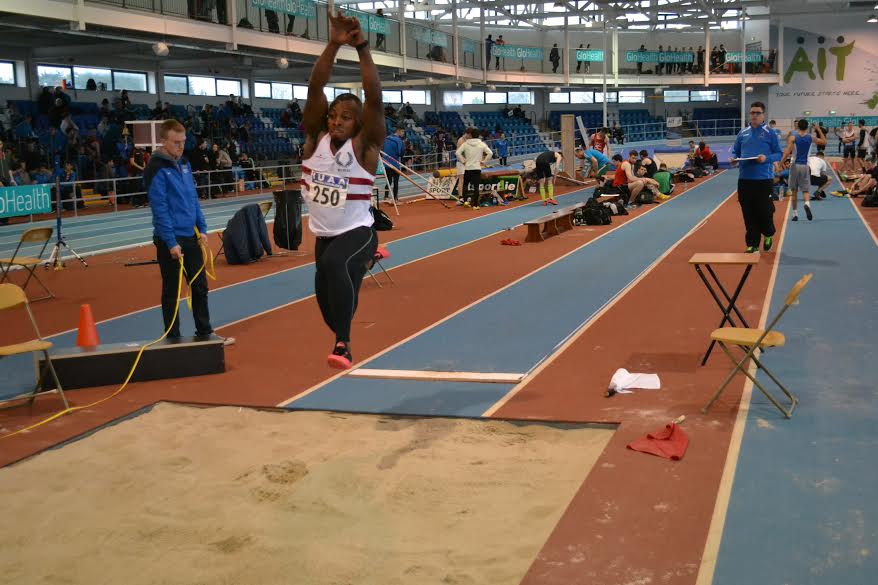 Dublin University Harriers & Athletic Club got their 2015 intervarsity campaign underway on the 6th of February when they travelled to Athlone for the Irish Universities Indoor Track & Field championships. The championships took place in the spectacular surrounds of AIT’s new international arena, and spectators were not disappointed, as some of the country’s best athletes served up a number of thrilling and highly competitive races.

Unfortunately for DUHAC, these were not one of the more fruitful championships of recent memory. Injuries robbed the college of some of their star performers such as Iseult O’Donnell and Robert Tully, and the simple difference in funding made available to athletics meant that Trinity were always going to struggle to compete at the same level as the modern powerhouses of university athletics such as DCU and UL.

Still, the group of twenty-three dedicated athletes that rose before dawn to make the trip west produced several highly encouraging performances. The undoubted highlight of the day was Rob McDowell’s bronze medal in the 35kg weight for distance, where he threw 7.42m. Displaying his all-round athletic capabilities, McDowell, who is better known as an American footballer, also made the final of the 60m, running a highly impressive time of 7.09 seconds in the process, and somehow found time to place 9th in the shot putt too. Also competing in the throws, Conal Campion was unable to add to his already impressive medal haul for the college, coming 8th in the shot put and 10th in the weight for distance, while Karl McCabe placed 7th and 11th in the same events.

Sarah Fitzpatrick and Sorcha Humphreys were particularly impressive for Trinity in the distance events, placing 5th and 6th respectively in the 3000m in times of 10:19 and 10:36. The same race elicited mixed emotions from the Trinity contingent, as it was won by last year’s Harriers captain Maria O’Sullivan, now wearing the colours of DCU, where she is a postgraduate student. Exchange student from Boston, Anna Hymanson also pulled on the Trinity colours for the first time to compete in the 1500m. In the men’s 3000m, harriers captain Colum O’Laoire ran a big personal best of 9:12, coming home 11th in a competitive race, with Donal Foley 16th. O’Laoire also put in a solid 1500m for the college, finishing 10th. In the same event, Sam Kinirons made a promising debut on the track, running a time of 4:36 for 18th place overall. Eoin Murphy, having recently made the step-up in distance from 400m, was unlucky not to make the 800m final, finishing 4th in his semi-final in a time of 2.06.

In the sprints, Dean Power finished 2nd in his heat of the 60m, but unfortunately his time was not fast enough to earn him a place in the final. It was a similar story for Trinity in the 200m and 400m, with Amr Dawood unable to make it beyond the semi-finals of the former, while Kevin Migge and Tadgh Healy giving it their all in the latter, but ultimately missing out on spots in the final. Migge did however mark his continued improvement over the distance with a new pb of 51.98. Incidentally, a lack of Trinity interest failed to prevent the men’s 400m final from being the most enthralling of the day. The start list was packed with top-class athletes, including Irish 400 metre hurdles record holder Thomas Barr of UL. It was came with a late surge to edge out Dara Kervick of DCU by 0.06 of a second, both athletes narrowly outside the European indoors qualifying standard.

DUHAC athletes picked up valuable points for their college in the pole vault, Conor Bermingham and Christopher Doherty clearing 3m 80cm and 3m 60cm respectively for 4th and 5th place. Ola Bademosi and Agnieszka Aziewicz also competed for Trinity in the heats of the men’s and women’s 60m respectively, with Bademosi also recording a personal best in the long jump.

The last events of the day were the 4x200m relays, where both male and female competitions were split into two heats, with medals decided on times. DUHAC’s men’s team of Amr Dawood, Kevin Migge, Tadhg Healy and James Sinclair-Ford were drawn in what proved to be the faster heat, with UL winning it in a new Irish Universities record time. The Trinity foursome battled hard for 5th place in the heat, and 6th overall. The DUHAC women were dealt a setback just before their race, when Catriona Twomey, who represented Trinity strongly all day in the combined events, agonisingly succumbed to injury in her last event, the 800m. Sorcha Humphreys stepped in to take her place in the relay team, adding another lap of the track to the fifteen she had run two hours earlier. She was joined by Agnieszka Aziewicz, Sophie Courtney, and Sinead Kelly, to secure 8th position

Overall, these championships will be viewed as a disappointment by DUHAC. Intervarsity competitions are primarily about winning medals, and this was a poor return by the college’s standards. While DCU remain untouchable in university athletics (they took the both the men’s and women’s overall team prize for the eighth consecutive year), it is important for Trinity to remain competitive. There is still plenty of hope for the future though, with some athletes showing real promise. Focus has already turned to the next event on the calendar, the intervarsities cross-country championships on the 7th March, where DUHAC will be hoping to win the women’s trophy for the third year in a row.