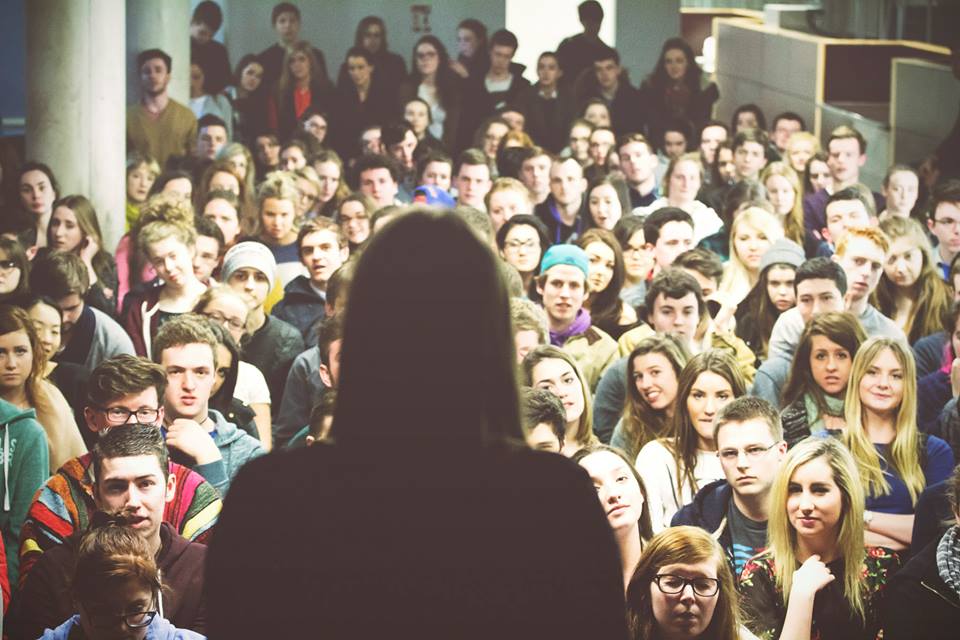 BESS student Michael Fitzgibbons has always wanted to challenge himself. This is clear from his planned trip to Vietnam in the summer to volunteer for the charity EIL: “Immersed in a different culture, it’ll be very tough, and it’ll be testing”. The JCR Presidency is, to him, another challenge he’d be happy to accept, and his priorities seem to be on uniting residences and fostering a better sense of community in Trinity Hall. 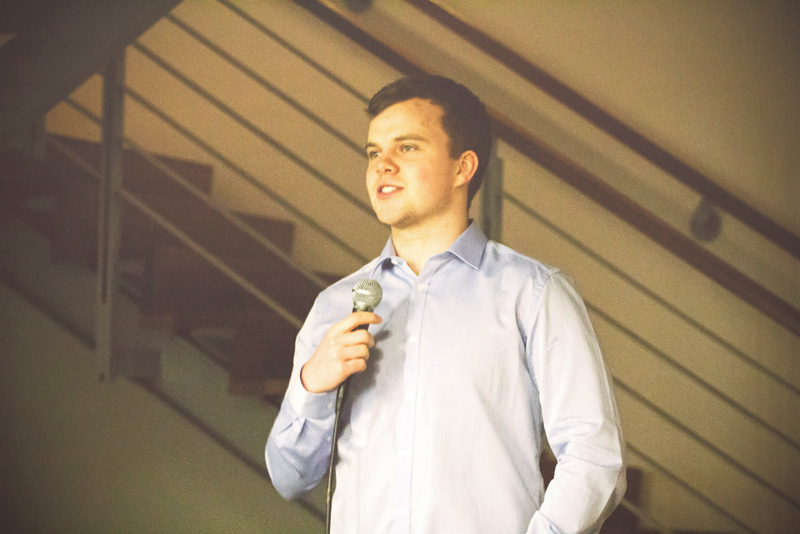 For Michael, the best way to do this is, to quote his manifesto, is to “go Hogwarts on Halls”. This idea of inter-house games springs from his push to be more inclusive. He doesn’t want a monopoly of sports competitions between houses though, and hopes that the Music Officer will help him organise open mic nights and other “light-hearted events”. He recognises that “there are so many different people in Halls”, and hopes that these games will attract a mixed crowd that will allow residents to make new friends with similar interests. One reason for the JCR not having done this before, he claims, is that “it’ll be challenging and you’ll need all the JCR to really buy into it because it will take time”.

Michael is adamant that the JCR, under his stewardship, will be approachable: “They could put more of a focus on doing the rounds. I never really met anyone from the JCR”. He hopes that by sending JCR Officers around each House on a fortnightly or monthly basis “we can let people know about plans for the future”, something that will be much more conducive to a positive atmosphere than a JCR Facebook notification every now and then.

He feels international students are slightly marginalised in Halls at the moment: “I’ve talked to a few of them, and some weekends it just happens that all their Irish friends have gone home”. For him, the remedy is to provide JCR-sponsored fortnightly social events, such as go-karting and bowling. Once again, he wants to set a precedent in Freshers’ Week that will encourage a stronger community ethos, and for these events his hope is that if they’re popular “we can run them more and more”.

Michael also wants to provide functional support to Halls Residents, especially in the early heady days of Halls. He is hopeful that he will be able to provide a base in Halls in which residents can purchase their Leap Cards during Freshers’ Week, and is currently in discussion with the National Transport Authority to ensure this. For him, “anything that can make starting Halls easier” is essential.

He speaks enthusiastically about turning Oldham House, currently quite an unattractive social space, into the social hub of Halls. He wants to ensure that Oldham House, once refurbished by the current JCR, will be there to facilitate light-hearted games, providing better entertainment, in a building that he feels is under-used at the moment by residents.

English student Bryan O’Malley begins with a eulogy of Halls, praising the great diversity of its residents: “I think it’s the mix of people you wouldn’t get at home. Whatever the time of day and night, you know that there’s someone around that you know”. This faith in the community of Halls is a key reason why Bryan wants to be JCR President: “I feel that the JCR should be this open, all encompassing body, because they do have a great effect on students”. 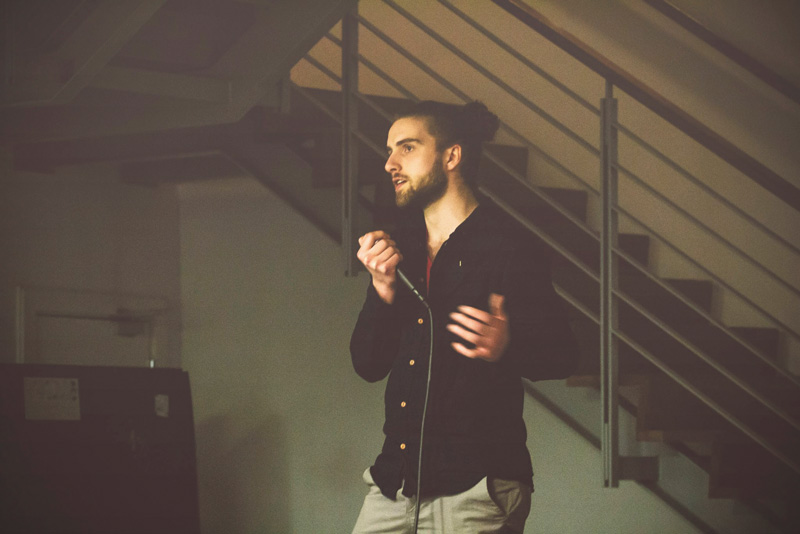 Bryan points to his past experience, across a wide range of bodies, that he feels has equipped him with the necessary skills to be JCR President. Whether it was working as a sales rep for two months, or being a “senior member” of his school council, he is confident he has the ability to effectively lead the JCR. Reading his manifesto, it’s clear that Bryan feels passionately about campaigning, especially on mental health issues, something that began in his Mayo school. He recalls the reluctance of a teacher to endorse his campaign to highlight mental health issues: “She told us ‘Lads, you’re in sixth year, don’t go reinventing the wheel’. But if you don’t reinvent the wheel, no one’s going to look up”.

This compulsion to make a change is obvious in Bryan’s extensive manifesto. One of the points of most interest to current residents is his promise to bring an Accommodation Information Night to halls, something he hopes will happen around the 19th of March: “At this stage, it’s just juggling dates. I don’t want it to go into Trinity term, because people are probably looking [for houses now]. For him, the important thing is education on tenants rights, and “giving people whatever help we can”.

With regards to making the JCR more approachable, he wants this to begin in Fresher’s week, turning the JCR team from pictures on a poster into actual people: “For the first few weeks, people are a bit like, ‘Who are the JCR, are they these god-sent people, are they war heroes, you just don’t know’”. For him, the central tenet of his tenure as JCR President would be “communication and connection”. The concern for him is those who might become overwhelmed by Halls, or may experience isolation in those first few weeks: “I know people who didn’t speak to anyone during their first few weeks in Halls”.

Questioned on whether sometimes JCR events can sometimes be too alcohol orientated, too focused on “cans and wine”, he tells me that this can be addressed by running more events in Oldam House: “This will get more people out of their houses, and I imagine that people that people who don’t engage in Halls probably feel some sort of social pressure [to drink]”.

Bryan wants to improve the pastoral link between the JCR and residents, and this is his key aim in promising to train all JCR Officers in SAFEtalk and Q&A. While talking about the role of JCR president, O’Malley often returns to the fact that he will be active in being chief campaigns manager. On the issue of sexual safety and consent, he speaks gravely on the need for education on the subject during the first Fresher’s weekend in Halls: “I’d hate for anything like that to happen on my watch. I want to create a safer environment”.

Bringing important issues to the minds of Halls residents is a key priority. He talks about how he learnt about the conference Pink Training, and how it “opens up a whole new world” for LGBTQ students. This is something that he feels LGBTQ students in Halls can benefit from, and has contacted Conor Clancy, incoming Welfare officer, about the process of securing places at the conference. “Some of these college weeks just pass people by”, and he hopes that he can change this. “If they’re not engaging, there’s no point in running them”.

Ending on a positive point, Bryan seems brimming with ideas to educate and stimulate the residents of Halls, and confident in his ability to achieve this “I’m not a miracle worker, but my ideas are simple, and I think that’s what will work”.

Running for the JCR Presidency is often the first time students dip their toe into student politics. This isn’t the case with Dundalk native and German and Irish student Shane Rice, who has already led the successful campaign against student charges in the recent referendum. “It was a bit daunting at first, but everyone was very supportive of it”, he tells me, still sounding surprised by the success of the campaign. What motivated him to get involved was the fear that this financial burden would put extra pressure on students who are already struggling. This drive to get involved, one that has saw him become a class rep, and indeed one that saw him spend six weeks of his summer volunteering in Thailand, he credits with his Louth school, that fostered a “Christian, philanthropic ethos”. 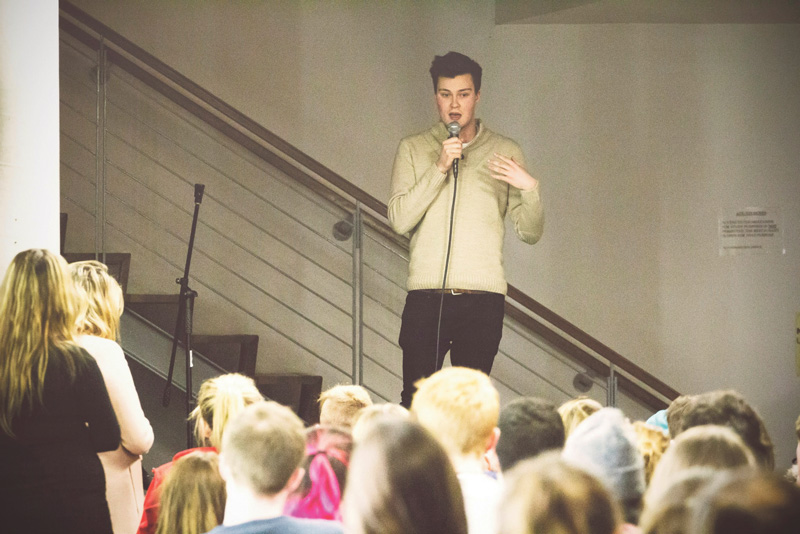 It is this desire to help that Shane hopes to bring to the Presidency of the JCR, claiming that instead of focusing on nights out, the JCR should become more active, not just among students, but among the wider Dublin community. “The JCR could serve more of a helping role than it does at the minute”, claims Rice, by providing more services and activities, bridging the gap between College and “remote” Halls. He cites an example of getting VDP involved in Trinity Hall: “There is a scope there to have a charity, community base”.

One of his key concerns is in getting people out from behind “the heavy doors” of their rooms. Sounding nostalgic, he tells me about how excited he was during Freshers’ Week, when Halls was alive with activities, but expresses regret as to how quickly this mood faded. For Shane, he doesn’t want the JCR’s reputation to be based solely on providing alcohol-fuelled events. “They’ve done a great job of catering for those who want nights out, but the JCR shouldn’t always be herding freshers into nightclubs”.

Rice firmly believes there needs to be a more reciprocal relationship between residents and the JCR: “I feel the JCR this year has been slightly insular and cliquey. I’m friends with them all, but sometimes these things happen”. This is the motivation behind his desire to have a JCR member assigned to each House, to improve the “rapport with residents”.

His involvement with TCDSU this year has also shaped a number of his policies, all with the aim of bridging the divide between the JCR and the rest of College. Rice feels the residents of Halls are underrepresented in the SU, despite numbering over a thousand students. “I’m sure we could have an agreement similar to one the TAP Programme has with the SU”, his hope being that better representation can improve Halls life. He has already spoken to the SU Welfare Officer about establishing an Accommodation Advisory Service workshop in Halls. He hopes that, if elected, this service can be provided for the current Halls residents: “I want to hit the ground running. I have friends who were in that situation last year”. This push to bring more College services to Halls includes providing some of the S2S services on site, such as essay writing or budgeting workshops. “I know in my first week, I spent €50 on nothing. There is scope there for more services on the Halls campus”.

A concern of Shane’s is the issue of sexual consent, something he feels needs to be better addressed by the JCR: “Sexual consent is a college-wide problem, and I’d like to see it addressed in some form”. He feels that this is something that the JCR hasn’t addressed effectively, especially considering a rape allegation was made in Halls earlier in the year: “It has been a problem in Halls. When a problem arises in Halls, it needs to be addressed”.

Photos by Pavel Rozman for the JCR