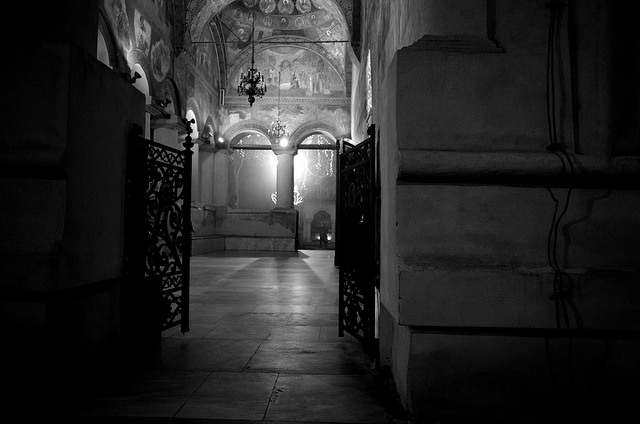 In Ireland, there is a vast disconnect between the religious beliefs of college-age students and the beliefs of society overall. While census figures from 2011 established that 84.3 per cent of the population identify as Roman Catholic, a significant 20 per cent of college-age students identified as atheists in a poll by the Student Marketing Network, with less than 60 per cent identifying as Catholic. The scandals surrounding the abuse of children and single mothers by the Church throughout the past century have left their mark upon Irish society, and it is hard to see what direction the religious feelings of the Irish will take in the future. Will we forgive the abuses of the Catholic church and return to 1950s levels of belief and adherence? Will we turn to different Christian denominations, turn to other religions completely, or leave religion behind for good?

Religion is an odd word. While many people indicate religious affiliations in polling statistics, under the surface there is remarkable tension between the different ways that people understand what these affiliations mean. For the non-religious, and especially the anti-religious, belief in the supernatural creator or “God” described in the various holy books of Western and Middle-Eastern religions is the core of what religion means. Michael Nugent, chairperson of Atheist Ireland, put it like this when he spoke to The University Times: “[Religion] is an attempt by some people to identify with what they believe to be the wishes of the creator of the universe, and an attempt by other people to control people’s lives in accordance with their own wishes”. While acknowledging that, for many people, there is more to religion than the doctrines involved, he views the benefits that people get from religion as “religion adopting natural happenings and claiming that they’re attributes of religion”. Father Rory Hanly, a Catholic priest of the Pallotine Order, has quite a different view of what religion means. Focusing more on peoples’ worldviews, and the storytelling aspect of religion, he says “[religion is] a set of beliefs, teachings, narratives, generally relating the ultimate questions about the nature and purpose of life in general and of human life in particular and about our ultimate origins and ultimate destiny to a supernatural being or supernatural beings”. So, while there is some disagreement here, both acknowledge the centrality of belief to religiosity, particularly belief in the supernatural.

Both acknowledge the centrality of belief to religiosity, particularly belief in the supernatural

Belief, however, doesn’t seem especially important to people who call themselves religious in Ireland. While just under 60 per cent of the polled students identify as Catholic, only 37.5 per cent stated that they believe in God, with 41.5 per cent claiming to be agnostic. What could people mean by Catholic if they don’t have a belief that there is a God? Vajrashura, an Irishman and an ordained teacher of the Triratna Buddhist Order, calls this “an ethnic relationship with their religion”. Describing these affiliations as traditional and cultural, he says that people with this type of religion are just doing “whatever the herd are doing”. Vajrashura contrasts this type of religion with “a positive spiritual path” where “true riches…come through a spirit of enquiry and active engagement”. For him, Buddhism is such a path, where “the goal in life is to become enlightened… a state of unending kindness and unending compassion, with complete awareness. You know yourself fully, and you are completely free from greed, hatred and delusion, free from any kind of selfish behaviour”. Nugent explains these changes differently, stating that “mainstream religion is under pressure from science” and “some people adapt to these changes and become more secular”. David McConnell, Professor of Genetics in Trinity College Dublin and honorary president of the Humanist Association of Ireland, says that this change is perfectly natural and to be expected, because “All of these ideas are irrational and unnecessary” and, instead of a supernatural account of reality, “The meaning of my life is provided by living with and for the people who were, are and will be with me and around me”. So these religious representatives give us three different ways that Irish people can view religion: the ethnic approach, involving the practice of traditional religious ceremonies for cultural reasons, the spiritual approach of finding a worldview and life meaning in religion, and the secular approach in which religious beliefs are abandoned or disregarded.

Michael Nugent reminds us that religious fundamentalism, also commonly called “extremism”, is another form of the spiritual path

While Vajrashura describes the Buddhist spiritual path as positive and fulfilling, for Fr. Hanly, in the Christian path, “meaning is to be found ultimately in a love that knows no bounds … it is in Christ that we find this love in the deepest way”. It is important to remember that not all spiritual paths are identical. Michael Nugent reminds us that religious fundamentalism, also commonly called “extremism”, is another form of the spiritual path. He claims that, with the reduction in religiosity in Ireland, and in the Western world generally, “the Vatican will shift its priorities to the developing world. Religion thrives most where people are focusing on survival values. Two in every three Catholics now live in the global South, mostly in Sub-Saharan Africa, Latin America and South-East Asia”. With both Fr. Hanly and Vajrashura acknowledging that the core differences between religions are ultimately irreconcilable, Prof. McConnell offers two alternative possibilities that may be more peaceable, “I expect religion to fade away”, or more intriguingly, “I wonder will a religion emerge which admits that man made god, not god made man… Imagine if that were developed — nothing supernatural about it, just a community of like-minded thoughtful people, who wanted to provide care and solace and to promote love for all people in a tolerant and open way”. The future seems incredibly open to many possibilities. What could this mean for Irish students as we enter the adult world?

“There definitely needs to be a system of values for society. That’s what communities are” Vajrashura says towards the end of the interview. I nod. I think of Fr. Hanly writing about the past “harshness in Church-run institutions” and how it has changed to “a particularly pastoral more than doctrinal purpose”. I think of Mr. Nugent’s call to arms: “We should rigorously promote atheism as a core foundation of investigating reality” and of Prof. McConnell’s egalitarian thought: “I am sure some religions will grow together and this is surely good for all”. Inside, I’m wondering. Soon, the worlds religions will be in the hands of today’s young, Let us see how they use it.