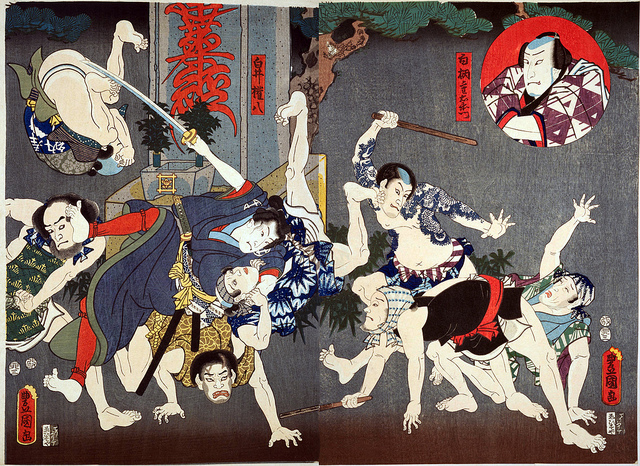 Last Thursday, The Metaphysical Society (DU Metafizz) hosted a discussion on the topic “Are All Martial Arts Equal?: A Discussion of the Ethos of Different Fighting Codes”. Speakers included Conor McGregor’s coach, John Kavanagh, as well as delegates representing the disciplines of karate, Krav Maga, Muay Thai and ice hockey. The event was chaired by Max Krzyzanowski, who is a former professional Muay Thai kick-boxer with wide martial arts experience. Krzyzanowski is also a familiar face around college as a spokesperson and organizer with LGBT NOISE and as a regular contributor to the Metafizz,the Hist and the Phil.

The first speaker was Aaron Guli, President of the Irish Ice Hockey Association. Guli could see the funny side of his own presence on a panel discussion martial arts but conceded that fighting is a major aspect of ice hockey, and although there are those who wish to vanquish fighting from the sport, it always has been. Perhaps surprisingly, Guli hopes, that fighting will be an important aspect of the game in the future as well. He said that fighting in Ice Hockey most often takes the form of grappling or bare knuckle boxing, and the presence of fighting as an accepted part of play, changes the nature of the game in a number of interesting ways. He spoke of one player who, though not acknowledged for his hockey skills, made himself a successful career out of protecting other players and attacking any other player who tried to injure him. Guli said that ice hockey players have traditionally learned their fighting on the ice, but that more and more, professional martial artists are being brought in to train the players in modes of combat.

The second person to speak was Arthur Dziadkowiecz, the head instructor of the Institute of Krav Maga Ireland. Dziadkowiecz talked about the history of Krav Maga as a combination of effective techniques from various disciplines used for self defense by Jews in Slovakia during World War II, and later developed by the Israeli Defense Forces. He said Krav Maga was a practical mode of self defense appropriate for people of all genders, sizes and ages, and that its techniques could make all the difference in a life or death situation. Dziadkowiecz has also trained in MMA and is one of the world’s leading experts on knife fighting, he argued that every Krav Maga practitioner creates their own style, an advantage Krav Maga has over many traditional martial arts which, some argue, overly rely on drills and a wooden way of moving.

The third speaker was Sensei Mark Sheridan, an accomplished practitioner of Shotokan karate, mixed karate and sports karate with a 4th Dan Black Belt, and gold medals at European and World level. He spoke of his love for the discipline of karate, itself a mixed martial art drawing from a wide and deep range of Japanese traditions and practices. He expressed concern over the potential implementation of Karate into the Summer Olympics, citing Judo as an example of a martial art which lost its way as a form of deadly self-defense when it became orientated around sports and competition.

The final speaker was John Kavanagh. Kavanagh was Ireland’s first Black Belt in Brazilian Jiu Jitsu as well as a former mixed martial artist and the owner of Straight Blast Gym, the home of UFC fighters Ais ‘The Bash’ Daly, Paddy Holohan, Cathal Pendred and ‘The Notorious’ Conor McGregor. Kavanagh spoke of his love for MMA as a sport above and beyond being a mode of self defense. He joked that on the average Saturday night he’s either at the ring corner with one of his fighters or at home watching Netflix with his girlfriend, never out in a situation where actual fights take place. “The least likely people to be in a fight on Saturday night are my fighters… I’ve been training them too hard all week for them to be able to do anything”. On the thought of a mugging scenario, Kavanagh said his first concern would be his and his girlfriend’s safety, and dismissed the idea of anyone fighting three people at once, except perhaps for Arthur Dziadkowiecz who “is in great shape and looks absolutely terrifying”. Kavanagh’s approach to martial arts is a “scientific one” and he teaches or doesn’t teach different techniques on the basis of how effective they are proved to be while in sparring. He cited several examples of martial a “mumbo-jumbo” like Chi energy which he equated with the grand claims of religion. The chair later said that the “gym should be more like a laboratory than a temple”.

There were several points of contention in the discussion such as whether martial arts should be entirely instructor-led for beginners or contributed to by all students, and to whether traditional martial arts were as effective as they claim to be in actual self defense situations. Overall, it was a highly interesting discussion and Max ended the event on the note that whether for self defense or sport, martial arts are for everyone and ought to be enjoyed by everyone.