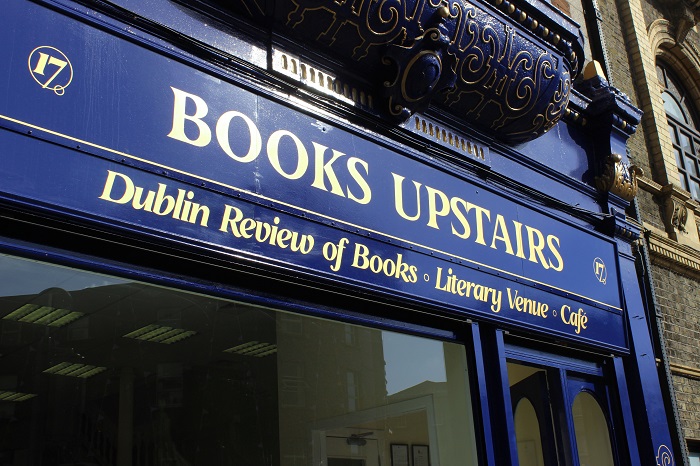 Walking past Trinity’s school of Nursing and along the otherwise rather grey façade of D’Olier Street in the last month or so, one may have noticed a difference to the place. Nothing overly extravagant, merely that one of the city’s best and most well respected bookshops have taken up residence at the Trinity end of the street. Books Upstairs have moved into their new premises, replete with gold lettering and an arresting blue paint-job out front, hardly a stone’s throw from Front Gate. Established in the 1970s on Kings Street North, the shop shuttled about the city for a while, spending a couple of years in the Market Arcade. It finally came to settle down on College Green in 1988 where it remained for 27 years and has since become one of the city’s best-loved establishments of a literary hue.

“We see ourselves as, and our ambition is to become, a centre for literary activity”

The changes of location are nothing to do with restlessness, however, according to owner Maurice Earls. He states it’s always been part of a larger plan. “The purpose of moving each time was to try to do the job a little bit better”, he says. “We feel that here, in these new, 21st century conditions, with competition from the digital area and from the vast online warehouses, we needed to do some things we’d always been doing, but to do them with a little more focus”.

Looking around the shop today, a location more spacious and airy by half than its College Green predecessor, you can see what he means. The ground floor seems an ideal potential event space, and as such has room for up to 60 people, the café in the process of being established upstairs for 40-50 more. The original shop in 1978 served coffee, Earls tells us, and so in many ways this is a return to the basics rather than some hip, ill-conceived addition. The plan now is for the new shop to become (or, indeed, to continue as) a hub for literary events and goings-on in the city, from lectures and discussion groups, to book launches and readings. The Dublin Review of Books, established in 2007 and published every fortnight since 2011, has its office on the top floor. 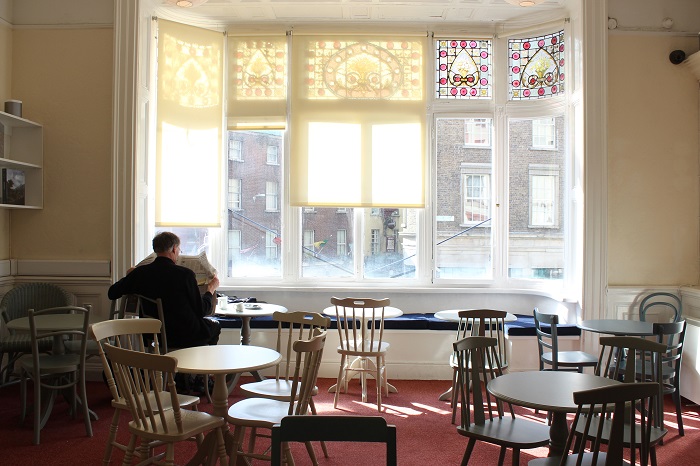 “We see ourselves as, and our ambition is to become, a centre for literary activity”, Earls says. With Books Upstairs, it seems, the ethos of the shop has always come before the profit. The books they sell are seen as more important by far than the mere fact that they are selling. It was set up with the “explicit purpose of promoting good literature, the areas of the humanities and the human sciences more generally, and literature in particular”. This is not superfluous or hyperbolic. Glance about the shelves in the new establishment and you’ll think yourself a million miles from the cynical world of big-business bookselling. Instead of shlock or mega-selling page turners, they are instead stocked with poetry, philosophy, politics, and quality works of literature both old and new, while a generous selection of periodicals, journals and literary magazines are to be found on a table to the right of the entrance.

“At the time, we would have been what you would call socially progressive in that we advocated full civil rights for gay people and for women, issues which nowadays have become mainstream”

Earls is very proud of what he sees as the efforts the shop has gone to be more than a simple bookshop: “At the time, we would have been what you would call socially progressive,” Earls points out, “in that we advocated full civil rights for gay people and for women, issues which of course nowadays have become extremely mainstream”. Less obvious, maybe, is that in other ways the shop and the people of the city it exists in have gone in the opposite direction in the interim. “Back in the 70s, attitudes were actually often quite a little bit more left wing than they are now”, says Earls, and Books Upstairs, like many people, have drifted slightly to the right in economics, as on social issues the leftward drift continues.

There has always been a commitment to the best of not only Irish, but international writing here, in whatever form it may take. This writer’s first encounter with the shop came about four or five years ago, on College Green, where I encountered shelves full of LGBT literature for the first time, and discovered the work of that darling of humanities departments everywhere, Michel Foucault. It definitely wasn’t my local Easons. “Well, of course, Foucault is on a hell of a lot of reading lists these days”, comments Earls, but in the late 1970s he would have been on very few. “We’d have carried people, like those French thinkers, from the earliest days”, he says. 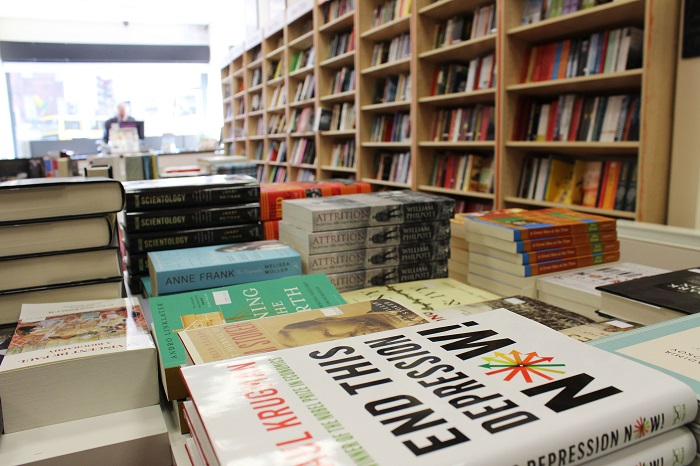 Of course, anyone will be able to tell you that times are not necessarily the easiest for independent booksellers, and for the book business more generally. Earls would naturally agree, saying that the economic climate of the last seven or eight years has done little to ease matters. However, this isn’t merely a case of enormous online retailers inexorably usurping the place of the bricks and mortar indie bookstore. Indeed, the rise of Amazon and its kind has in ways been a blessing in disguise. The challenges to the sector began before the beginnings of the digital age.

“From the 80s, there were highly capitalised businesses entering the book business, which were offering space and that type of thing that independent booksellers had absolutely no chance of competing with”. Borders was one, Waterstones another. Counter-intuitively, the competition from online superstores has been in some ways beneficial. Borders have vanished from the country, Waterstones have also moved out. This opening up of space has meant that “there’s now an opportunity for the independents to do what they always did” – bring quality writing to those who might be looking for something different.

“From the 80s, there were highly capitalised businesses entering the book business, which were offering space and that type of thing that independent booksellers had absolutely no chance of competing with”

Earls uses publishing as his example. The shop being involved with the Dublin Review of Books, which Earls co-edits, isn’t a new phenomenon. “Publishing is a traditional eighteenth and nineteenth century activity of booksellers”. D’Olier St. itself used to be a major hub of both selling and publishing books in the city. In many ways, it’s “back to the future”, he says, for many independent bookshops, in terms of the events they put on, and the activities and projects they take part in. Earls is positive about the current state of the Dublin literary scene, which his shop is of course fully enwrought in. “There’s an awful lot going on in Dublin of a creative nature, and it’s an exciting time for the arts world in the city”, Earls notes, and we can be sure that his shop will continue to be among the centres around which this creative milieu will revolve.

Perhaps it wasn’t the wisest idea, he tells us, to have gone into business originally with such an explicit dedication to a non-business agenda. Nonetheless, for the last 37 years they’ve clearly been doing something right. “It was possibly not the wisest thing to do, but we did it, and we’re still here. We haven’t grown fat or rich off of it, but we’re still here”.

Photos by Benedict Shegog for The University Times