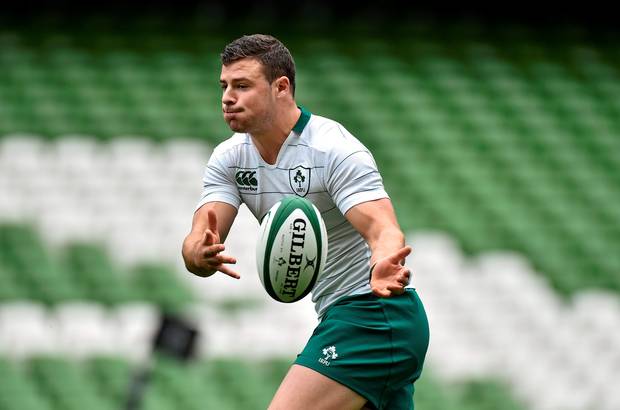 Rarely has a team played such satisfactorily boring rugby. There is not much spectacular about how Ireland dismantled England in the Aviva Stadium on Sunday, but it was lovely to watch. As soon as Jonathan Sexton converted Robbie Henshaw’s marvellous try England were down 16 points and the game was over with about 25 minutes left on the clock.

Ireland started brightly, taking the game to England. James Haskell gave up a very silly penalty for going off his feet in the ruck and Sexton duly slotted the 3. Ireland then started to turn the screw in England’s territory, with Sexton launching a pinpoint kick for Tommy Bowe and Jack Nowell to contest, leading to a 5m scrum. The Irish scrum had been singled out as a weakness before the match set the tone early, giving Ireland good momentum with Robbie Henshaw and then Sean O’Brien charging at the English line. Ultimately England conceded another penalty and it was 6-0 to Ireland after 10 minutes.

England began to grow into the game then, as we got a sense of the damage Anthony Watson and Luther Burrell could cause if they got their hands on the ball. England worked their way into Irish territory and with a penalty advantage George Ford kicked a drop goal in front of the post. This was to provide a nice counter-point later in the game, when Ireland had advantage in the England 22 Conor Murray chipped over the top to give Henshaw a chance at the try. Test match rugby is decided on fine margins, largely in the top three inches, and Ford’s inexperience really showed. He was not given an easy ride, with the Irish loose forwards wreaking havoc at the breakdown, McGrath, Best, Toner, O’Connell and the back row all doing excellently. The young ten is great to watch, but he failed to get England playing in the right areas of the pitch and Ireland were vindicated in their game plan of targeting him.

The worst moment of the first half came shortly after Ford’s drop goal, with Sean O’Brien charging straight at the Bath outhalf, the Tullowman was visibly dazed after the collision and he played no further part in the game. Luckily for Ireland, Tommy O’Donnell stepped up and was excellent.

The third quarter was a signal that this Ireland side has progressed and learned to assert their advantage. They have had a problem of controlling games but not putting the points on the board that they ought to. That they had won this game after 55 minutes was testament to this being a sign of them pushing on a level. The way they let England back into the game following Sexton’s withdrawal due to a hamstring twinge will be a worry but overall this was a great game.

It is hard to criticise a winning side, but following the ugly win against France a fortnight ago questions could have been asked about a couple of players. Rory Best was poor two weeks ago, and under pressure after his silly yellow card, but more than made up for it today. He was absolutely excellent, the line-out was perfect against a good English unit and he made a nuisance of himself around the field. Calls were made for the inclusion of Luke Fitzgerald or Keith Earls over Simon Zebo and Felix Jones, but Zebo in particular had a brilliant game, time and again putting pressure on the English wingers on kick chases and was assured under the high ball. To combat the power of the English it was suggested Iain Henderson might start in place of Devin Toner, but the Leinster man put in an excellent shift, stealing two English lineouts in a row when Ireland needed it most.

Ireland will be worried about the injuries picked up, but on the bright side they have two weeks to recover before the massive clash in Cardiff. While it likely will come too soon for Jamie Heaslip, two weeks should probably be enough for Sean O’Brien to recover from his head injury. The extent of Sexton’s leg injury will be crucial, such is his importance to Ireland. Jared Payne also hobbled off early and Robbie Henshaw and Peter O’Mahoney both played through injury for much of the game. This side has won 10 games in a row, is over half way to a grand slam and a third of the way to a triple crown. It is a thoroughly satisfying time to be an Irish rugby fan.