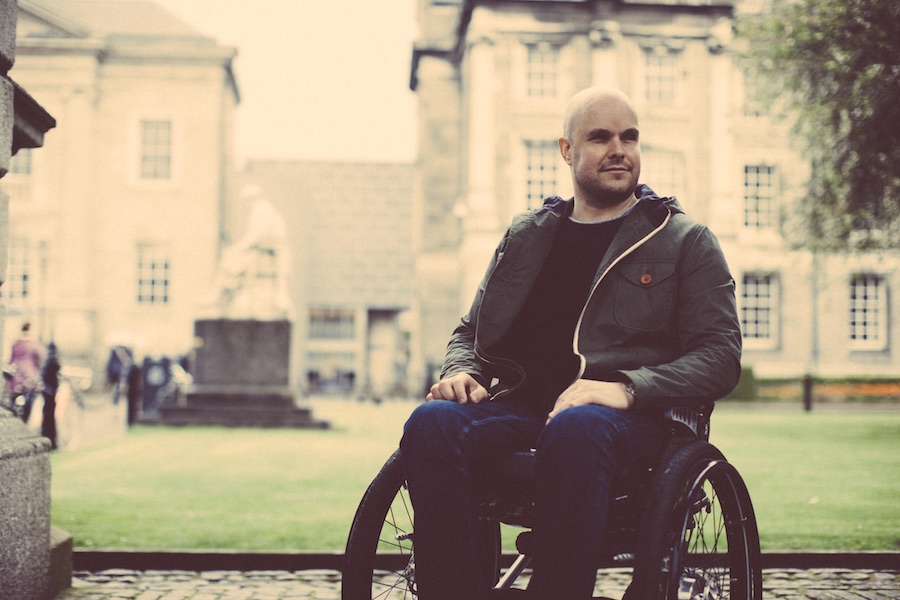 Mark Pollock is blind, paralysed and unbreakable. Following his appearance at Trinity’s Body and Soul week Pollock sat down with The University Times to talk about Trinity’s contributions to his recovery, overcoming new challenges and finding his way beyond a spinal cord injury.

An alumni of Trinity College, Pollock has been called Ireland’s Superman. It is apt since, due to the adversity he has faced, he would reignite the public interest Christopher Reeves had first fueled in spinal cord research. Pollock outlines how the current medical system prepares a person to adjust and adapt to their paralysis with the expectation that they will be permanently confined to a wheelchair. Pollock refused to accept this prospect and sought ways he could continue to be physically active. “If all of the health messaging is that it’s good to be fit for an able-bodied person than it just did not make sense that you should just say ‘let’s forget about the paralysed parts of the body and just never exercise those ever again in life’”.

With this in mind Pollock began exercise-based recovery, travelling to the United States to take part in Project Walk, an exercise-based program which promotes physical activity after paralysis to move beyond compensation and toward recovery. Pollock progressed his intervention through the use of robotic legs in 2012: “Physical exercise was a big step forward, most people don’t even have access to that, the robot legs were off the scale. I figured doing the exercise, walking in the robot, it’s good, but it’s not going to provide a cure”.

Seeking to combine scientific progressions in spinal cord recovery and physiological interventions, Pollock sought counsel from Dr. Reggie Edgerton of University of California, Los Angeles (UCLA) to design a new intervention programme. Dr. Edgerton devised a study based on stimulating the nervous system by a process known as neuromodulation. In light of successful recovery in animal models through electrical stimulation and excitatory drugs, Pollock believes that with the right manipulations results of recovery can be replicated in humans: “I have it like a Venn diagram, in my head, that an overlap of the physical exercise, robotics, simulation and some kind of scientific intervention will fix it”.

Having spent much time in the physiology and anatomy labs in Trinity over the years, Pollock noticed similarities in the set up, operations and ethos of the research labs in UCLA and Trinity and knew the next step was to create a collaboration between the two.

“Human beings generally need little wins along the way to feel like we’re moving forward. Paralysis is largely a story of failure. It is therefore quite difficult to get people excited for something that isn’t moving forward”

Trinity has played an important role throughout Pollock’s extraordinary journey. He used the facilities to train for his marathons and Antarctic expedition and continued to use the Trinity Sports Centre weekly for his training. Hence, for him, an academic link-up to allow research to be furthered in Trinity seemed like a natural progression. Pollock jokes about how he is spending much more of his time in the Hamilton end of Trinity these days rather than in the Arts Building as he would have as an undergraduate BESS student. With the wealth of expertise across faculties and the range of both research and sports facilities available, Pollock believes Trinity can greatly contribute to the research, saying: “The project is evolving. It’s by no means there yet, but the conversations are happening”.

Pollock noted that a major limitation of his project is simply the fact there is currently no cure: “Human beings generally need little wins along the way to feel like we’re moving forward. Paralysis is largely a story of failure. It is therefore quite difficult to get people excited for something that isn’t moving forward”. This, along with the rigorous process of validation and replication within scientific research, creates problems in terms of commercialisation and moving the project from research to practice: “The science must be rigorous. But as a patient I am frustrated by the time it takes to move from research to practice – out of universities, into companies, into products and then into people with difficulties.” As the paralysis population is a small one, multinational companies do not see it as a big enough problem to fund a viable business. Pollock’s research is picking up good results but not moving out to the commercialisation end: “This for me is the most frustrating part. So, I may need to start moving back up to the arts block, get some economists on this”.

Trinity as an institution has opened up a huge variety of opportunities and networks: “the institution and name itself gives us great credibility, for instance when we’re talking to people in America.” Similarly, Pollock noted that this network has proved invaluable for his motivational speaking business, which he set up during his mid-twenties and continues today. “The researchers and journalists I was speaking too at the time are twelve years down the line, a lot more senior.” He continued to reason with us with a creeping grin across his face: “Of course that’s why I’m talking to you two of course – because a lot of people who are who are big in newspapers in ten years will all be gone and in ten years you’ll all be there”.

“Blindness and paralysis chose me. I decided to go to the Gobi desert, to row, to Adventure train. Some choose you and you choose others but in the moment it doesn’t matter”

Mark’s motivational speaking has developed greatly from addressing transition year students, corporate companies, and universities and negotiating between two huge Silicon Valley companies and now co-ordinating between UCLA and Trinity. “I’ve learnt that – although I’m always talking about myself and my story – me telling my story is not of any interest unless there is something within it which is relevant. That’s what you’re trying to do as journalists or film makers. We need to make our stories relevant to the audience”. He continued: “I’m very focused on credibility and execution rather than what I might do or haven’t done. Therefore I like to simply acknowledge that there is no cure for paralysis, state that our mission is to find and connect people worldwide to find one and let people know what we’re doing to make that happen and how they can get involved!”

Mark confessed that his greatest achievement to date was his 43-day expedition to the South Pole, described as “an unforgettable experience as failure went hand in hand with success from the outset”. Such huge risk was involved from the start: securing his €100,000 fundraising money, the risk of not being able to move quick enough on the terrain, blindness, frostbite, and being on your feet for 14-16 hours a day: “All of that hardship made it worth it in the end. You forget all the tough times in your life and difficulties and it makes it really hard and that’s what makes it worth it.” After his countless endurances, his motto to live by is simply: “It doesn’t matter what the challenge is or where it comes from – it’s what you decide to do about it that counts”.

He continues: “Blindness and paralysis chose me. I decided to go to the Gobi desert, to row, to Adventure train. Some choose you and you choose others but in the moment it doesn’t matter. It’s what you decide to do with it. Decisions you make when you wake up in the morning are what count even if can’t control them.”

Pollock’s story is one of inspiration, fascination and resilience, but the pursuit of a cure for paralysis may be his biggest challenge yet. With new developments constantly emerging within the field Pollock is excited to see where the future will take him: “I wouldn’t be in a wheelchair if I didn’t have to be, and I wouldn’t be using robotic legs if I didn’t have to be. Our ultimate aim is to find a cure for paralysis. There will be a cure. The question is simply timing. It might be too late for me but we’re just trying to help find that cure and I know that we will have contributed to the research no matter what happens”.