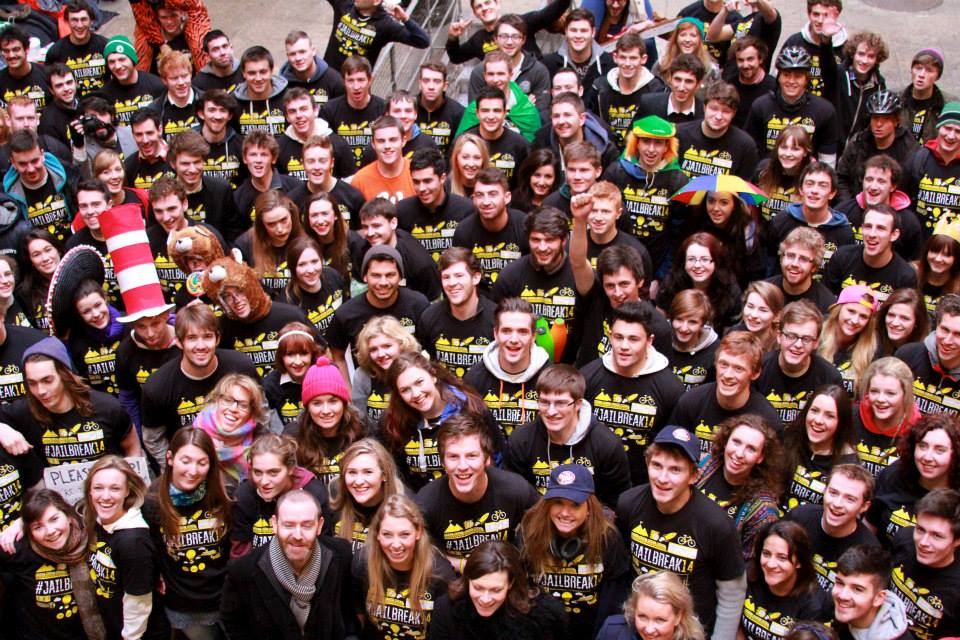 This year, Jailbreak aims to make ten times more money for charity than it did in 2013. While this objective is audaciously impressive in itself, it becomes all the more so when you consider that Jailbreak is an event ran solely by students, an event that was founded in Trinity and run by Trinity Societies DU Amnesty, Law Soc and Trinity VDP.

Despite this, last year’s Jailbreak garnered some criticism from the general public. While the event itself grew in scale – over 200 students competed in 2014 compared to just 74 in 2013 – so too did the coverage and “hype” surrounding it. For some external observers, Jailbreak represented the kind of selfish activity that entitled students are likely to get involved in, the kind of event that people took part in for the enjoyment rather than to do a good deed.

But as the number of critics grew, so too did the defenders of the event – and the total figures rose. In its first year, 2013, Jailbreak raised over €10,000 for SVP and Amnesty. In 2014, as the event expanded to include students from UCD, NUIG and UCC, the event raised over €40,000. Not bad for two days work from the participants.

“There are more ways to act for justice than attending a protest or writing a letter. They are all important, all valid”

For some, the criticisms come from a perceived distance between the aims of the event – raising money for charity – and the methods and image the event employs. This perceived gap, however, isn’t recognised by those who really matter. Speaking to The University Times, Colm O’Gorman, Executive Director of Amnesty International in Ireland, claimed: “Those participating in Jailbreak are acting for human rights: those who give them sponsorship money, those who share their status updates online and those who sign our petitions. There are more ways to act for justice than attending a protest or writing a letter. They are all important, all valid”.

Yet, criticisms of the event continue. For some, the point of giving all money to charity is nullified once teams have to spend their own money or seek alternate sponsorship in order to fly themselves back. For others, that teams seek corporate sponsorship stands contradictory to the perceived aims of the event. Aisling Byrne, Vice President of Fundraising with Trinity VDP, explained to The University Times that: “Many people do not see the link between SVP and Jailbreak. A complaint received last year was that it was just about the money.”

This year steps have been taken to combat this. In order to highlight the ethos of the charities four “Charity Challenges” have been introduced, which the teams must compete before progressing. These consist of performing a random act of kindness, which represents VDP looking after the welfare of those in need; taking a photo wearing a blindfold to promote Amnesty’s message of not turning a “blind eye to torture”; teaching someone a skill, just as VDP work with young people; and making a paper boat, which draws attention to Amnesty’s #SOSEurope campaign around the thousands of refugees that attempt to cross into Europe via the Mediterranean sea.

Even though the event doesn’t officially launch until tomorrow morning, Jailbreak 2015 has already raised over €45,000 and the organisers have set themselves a total goal of €100,000.

The money raised for charities has grown hugely this year. Even though the event doesn’t officially launch until tomorrow morning, Jailbreak 2015 has already raised over €45,000 and the organisers have set themselves a total goal of €100,000. This money goes directly towards the work undertaken by the two charities. For O’Gorman, “the funds raised through Jailbreak help us continue our human rights work and work on campaigns”. He explicitly highlights Amnesty’s campaigns such as the Stop Torture campaign and My Body My Rights, which relates to sexual and reproductive rights, “especially for women around the world”. For St Vincent De Paul, the money is used directly to fund the services it provides. Byrne explains that: “VDP run over 20 activities in the local area, ranging from Soup Runs to Visiting the Elderly to Homework Clubs. As we are a 100% voluntary branch, all money raised from fundraisers like Jailbreak go directly to these activities. Jailbreak is our biggest fundraiser of the year, and the amount we raise pretty much defines how much we can do in the coming year. ”

The beauty of Jailbreak, however, is not simply its monetary success. The event brings together both the Trinity community and the wider student community. It has gathered increasingly large attention across the nation, with coverage from the Irish Independent, Newstalk and even internationally with Time magazine. This year Jailbreak has secured Spin 103.8 as a national media partner. This attention translates itself onto its charities. For O’Gorman, Jailbreak has the potential for “bringing attention to Amnesty, informing people of the work that we do and encouraging people to join as members. Amnesty is a movement of people and our members are at the heart of this.” That Jailbreak has the power to bring positive attention to the relevant charities is a sentiment echoed within VDP: “Amongst the student population there’s definitely huge enthusiasm when you mention Jailbreak. It shows that Vincent de Paul is something that can be both fun as well as hugely rewarding. Having that bit more recognition makes a huge difference in recruiting volunteers, which gives us the chance to keep making the activities we do the best they can be.”

“Jailbreak is our biggest fundraiser of the year, and the amount we raise pretty much defines how much we can do in the coming year. ”

Jailbreak’s method receives praise from O’Gorman too: “It’s a people-led movement, invented and carried out by the students themselves. It is part of our value of empowering others, of caring for the world beyond one’s own small orbit.” Jailbreak’s increasing success has come about through its ability to diversify and change, to expand beyond the walls of Trinity and to change its rules when they are at risk of becoming stale. For O’Gorman, this spirit is Jailbreak’s advantage in terms of successfully raising money: “I think one of the greatest challenges facing Amnesty is when people believe that there’s nothing they can do, that the scale of the problems around the world are too large for any one individual to make a difference – a sense of powerlessness. Individuals can do amazing things but even more successful can be a chorus of voices.”

“For those who see Jailbreak as a selfish enterprise, the money raised and the gratefulness of these charities speak for themselves.

What motivates teams to take part might be, at least in part, the promise of an enjoyable and memorable weekend, but each team remains firmly conscious of the event’s charitable aims. The University Times spoke with team Max and Dave, a Trinity team who have already managed to raise the most money of any team: more than €2,300 before the start of the event. For Dave, it was the charity aspect that motivated them to take part: “I had prior experience of the great work SVP carries out from secondary school where we used to run fundraisers and appeals, particularly around Christmas like the Giving Tree Appeal, and in TY I was lucky enough to do a social outreach placement working with homelessness and drug rehabilitation in Inner City Dublin where I saw first hand what a massive social issue homelessness is in Dublin, so I jumped at the chance to get involved in Jailbreak.”

The team have raised funds through donations from friends and family and have received corporate sponsorship from Elverys Sports, Harvest Assets, Gotham Café, Solar Wind and Ferring Pharmaceuticals. “Both Max and I not only wanted to win the race, but also to raise as much as possible to help out these great charities too, so we decided seeking out corporate sponsorship would be our best bet at make a meaningful contribution.”

For those who see Jailbreak as a selfish enterprise, the money raised and the gratefulness of these charities speak for themselves. For O’Gorman, that the event happens to be fun is just an added bonus: “Amnesty International deals with harrowing cases of abuse, war crimes, crimes against humanity and the worst we do to each other, [so] we also try to have fun where we can.”