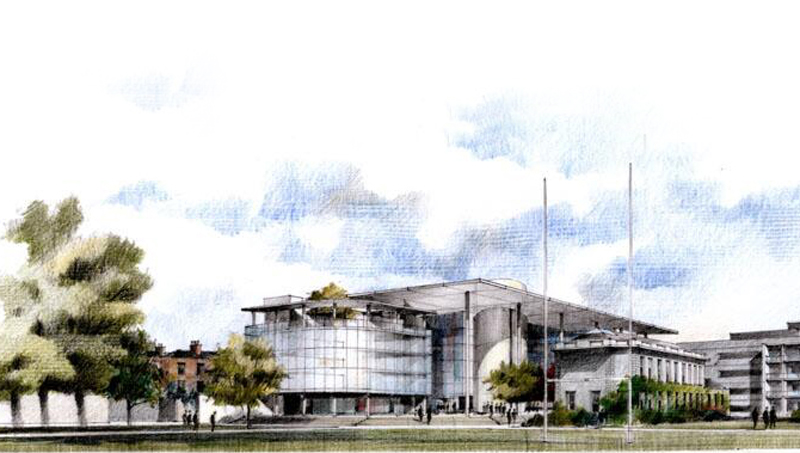 The completion of Trinity’s new €70 million business school is to be delayed by at least 18 months, at an estimated cost of €150,000 per month, because of planning permission issues.

In a memo on March 18th to the College Board, obtained by The University Times, the College Bursar and Director of Strategic Innovation, Dr Gerard Lacey, said that the business school project “has had a negative response from the city planners and it is necessary to redesign the building”. The resulting redesign will result in a delay of the opening date into “late 2018 at the earliest”, the memo says. College had hoped to have the building completed, on the current site of Luce Hall, by 2017.

It is hoped that the project will remain within its €70 million budget. While the memo says that “delays to completion are currently modelled at an additional cost to the project of €150K per month”, it is understood that contingency plans had been made in the event of a planning issue. However, “the budget for the building will have to be reviewed”, the memo says.

Pre-planning consultation with Dublin City Council revealed that significant redesign is needed to meet their requirements. The glass rotunda of the building is “not an acceptable form”, while the building remains a “full floor too high”, despite the moving of the top floor into the basement. The memo states that this may mean that “certain elements of the building” may need to be removed to “fit both the new design and the project budget.” The council also expressed concerns about the Pearse St skyline and how the building would impact it, as well as how close the building would be to the Botany building.

The time needed to develop the new design and the ensuing planning process remain the “biggest source of uncertainty”, the memo says.

The planned building was to have a co-located Entrepreneurship and Innovation Hub alongside the School of Business, which would have space for company incubation projects, like Launchbox.

The rejected designs were for a 13,000 square metre building with six over-ground floors and three basement levels, a 600-seat auditorium, and a restaurant which could seat 200 people, among other things.

Leo Harmon, a director at BAM Contractors and the board monitor appointed to independently report on the progress of the business school project, has criticised some aspects of the planning. In a report filed on March 18th, he said: “It is unfortunate that the parties involved with submitting the planning were not listening to each other and were also overly optimistic in their timelines.” The detailed design phase of the project is “5 to 6 months behind”, while tender and pricing documents are “6 to 9 months” behind, while the construction phase is “9 to 12 months behind”.

Issues have also been raised by the stakeholders in the project. Harmon said that there was a “lack of team meeting minutes and outstanding issues log means that some stakeholders’ issues may have been forgotten”. Because of the forced redesign, the opportunity to address stakeholder issues has arisen, he said.

Meanwhile, he said “the weakest aspect of this project so far has been the design team’s performance”, with project members who have “not managed the design process and have been overly optimistic”, and architects who “appear not to have listened to the key stakeholders”.

In response, the steering group of the project has appointed Greg Power, Trinity’s new Head of Capital Projects and Planning, to the team, which has “helped focus” the team.

A new design concept for initial consideration was due to be proposed to the steering committee on March 27th, the memo said.

Responding to a request for comment from The University Times, Dr Gerard Lacey said: “With any major development of this size, one would expect deviations from projected timelines. A planning application has not yet been submitted. Issues raised by the city planners will be addressed by the design team with an expected planning application to be submitted in the next few months.”