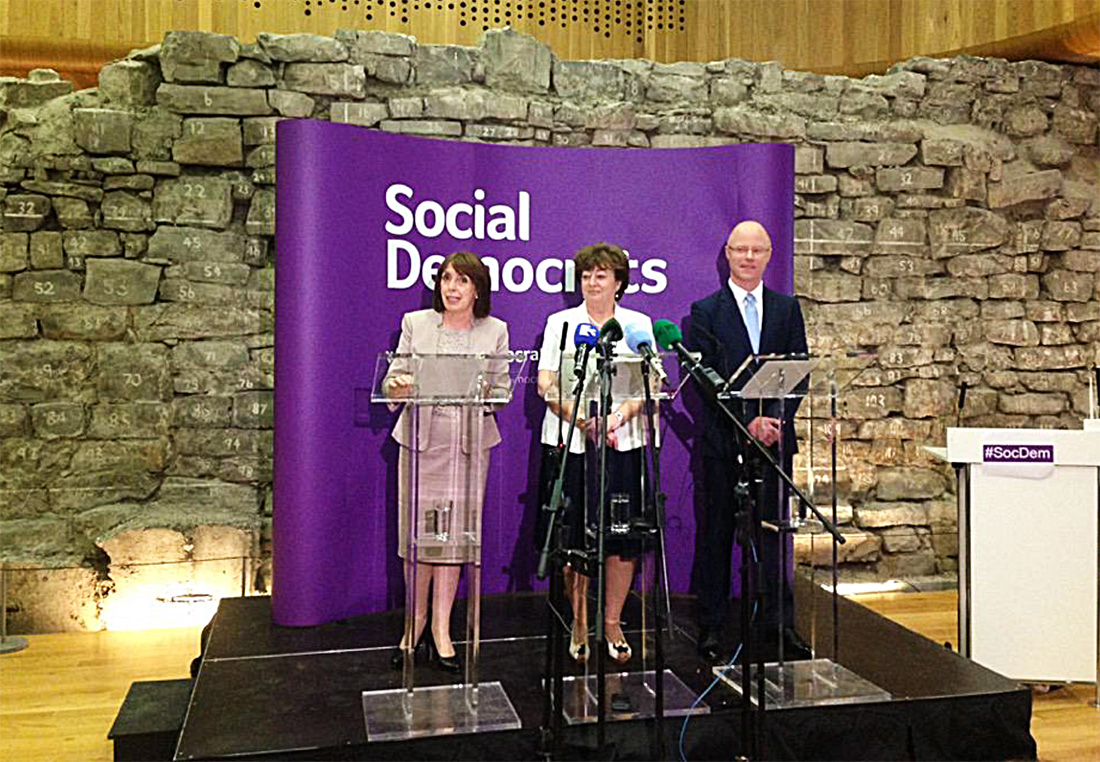 Today, a new political party launched. While I can’t say I was blown away by their launch, there was something impressive about the grouping of the three TDs – Róisín Shortall, Catherine Murphy and Stephen Donnelly – in the sense that it’s extraordinarily rare to see three politicians launching a party who, from the outside in, seem to be extraordinarily honest.

I would say that it was refreshing, but that doesn’t get to the crux of it. It’s more that, for the first time in a long time in Irish politics, we can’t help but admit that a collective groan would not only be unwarranted, but unjust – given the three politicians we’re talking about. Shortall, in 2012, was a Labour Party junior minister. And she resigned, not because she had to or because anyone wanted her to, but because she felt she couldn’t support the values which underpinned the programme for government. Catherine Murphy should need no introduction if you’ve been paying any attention to the news – but a recent speech of hers was one of the most important things to happen in the Dáil in my lifetime, anyway. And Stephen Donnelly – well, he’s the guy who just always happens to say the right thing when it comes to financial matters. His contributions are always measured, logical and well researched, something that is, itself, extraordinarily rare to see in Leinster House.

Students need to engage in this debate, and the Social Democrats look like the best bet.

So, what does that mean for students? The Union of Students in Ireland (USI) recently spoke about the increased political capital of young people after the marriage equality referendum. And Donnelly brought up Yes Equality today, in the context of a change in Irish politics. The question that has arisen since May 22nd is how student leaders can turn that momentum, the one that had thousands of students knocking on doors and politicians envious of the groups gushing to canvass, into something palpable in the next general election – which is, at most, just 262 days away. The party launched today – dubbed the Social Democrats – seems to be a logical choice for that, and not just because it’s the only option that I can recommend students to get involved in with a straight face. Aside from being honest, all three were big supporters of marriage equality, all three said today that they wanted the eight amendment repealed, and all three seem genuinely interested in listening to young people.

The big issue for students, student unions, and education ahead of the general election is the higher education funding problem. For those not versed in that type of language, we’re talking about just how universities and higher-education institutions are going to be funded into the future, given the current situation – with dramatically reduced funding since the economic crisis – is unsustainable. In Trinity, we’ve had a College Board member feel urged to speak out about the pressures it’s putting departments under. And the the question is whether tuition fees are going to be introduced, or whether a loan scheme is needed, or whether a graduate tax will be applied. There aren’t many combinations that will or can work – and the current government has been kicking the can down the road for a long time. There are fears that we might not even get the report from the government working group in time for the general election – the second working group in the lifetime of this government, as I keep reminding people – and thus, the fear really is that this problem won’t become an issue ahead of the general election, and thus won’t become an issue after the general election either, because it won’t have featured in manifestos, and thus won’t feature in the next programme for government.

I spoke to Catherine Murphy today about the higher education funding problem. She seemed aware that it was an issue, but didn’t give an indication that the three of them had discussed higher education as a central or significant platform, saying that “all public services are important”, and that they “had to choose issues which were defining” for their launch. In his speech, Stephen Donnelly said that they need to start asking “big, ambitious questions”, like “How do we get a top 5 education system in the next 10 years?”. It’s an ambitious question all right, but it starts with the recognition that the way higher education institutions are funded needs to be looked at right away, and that it needs to become a defining issue ahead of the general election. Questions like that are great – but the answer to it is not that complicated: with four universities in the top 300 globally (despite the fact that none of them are in the top 300 in terms of funding), we’re doing extraordinarily well. The sector just needs more money – the question is not how we can make universities great, it’s how we can get them funded such that they can realise their potential.

Students need to engage in this debate, and the Social Democrats look like the best bet.