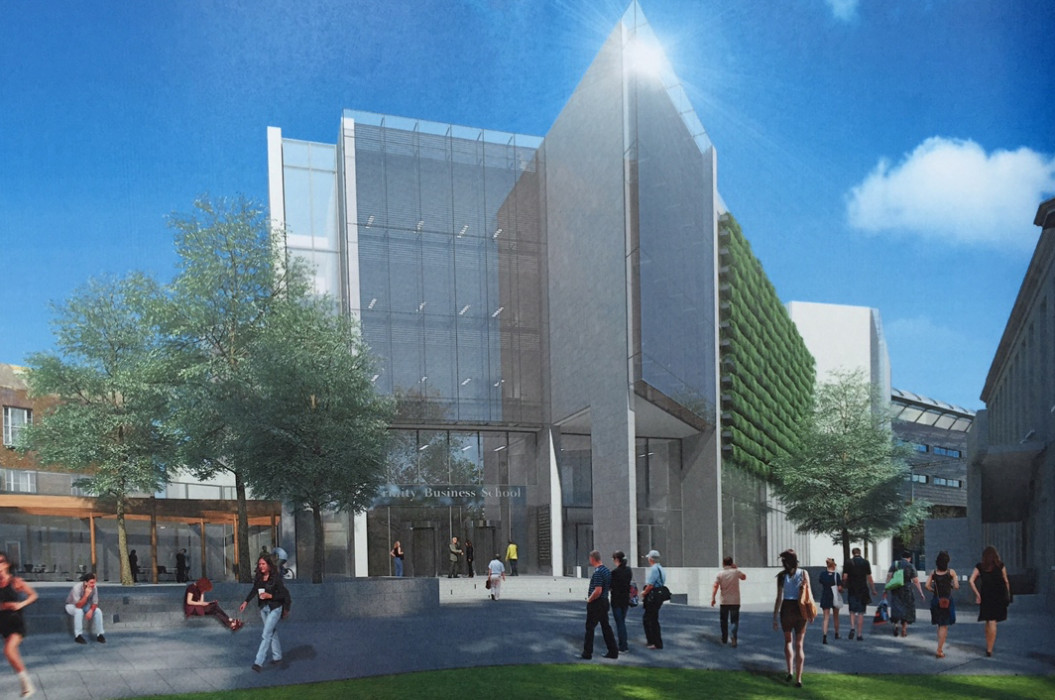 Redesigned plans of Trinity’s new €70 million business school were presented to a series of public meetings this evening, several months after the original redesign was rejected in pre-planning consultation.

The rotunda design, which was “perceived to be an inappropriate form and over-dominant” on the landscape, has been replaced with a new splayed elevation. The building, which was originally intended to be completed by 2017, is now hoped to be open in time for September 2018. Planning permission was submitted to Dublin City Council recently, following the redesign resulting from consultation with the council in March, when it was indicated that significant changes would have to be made. 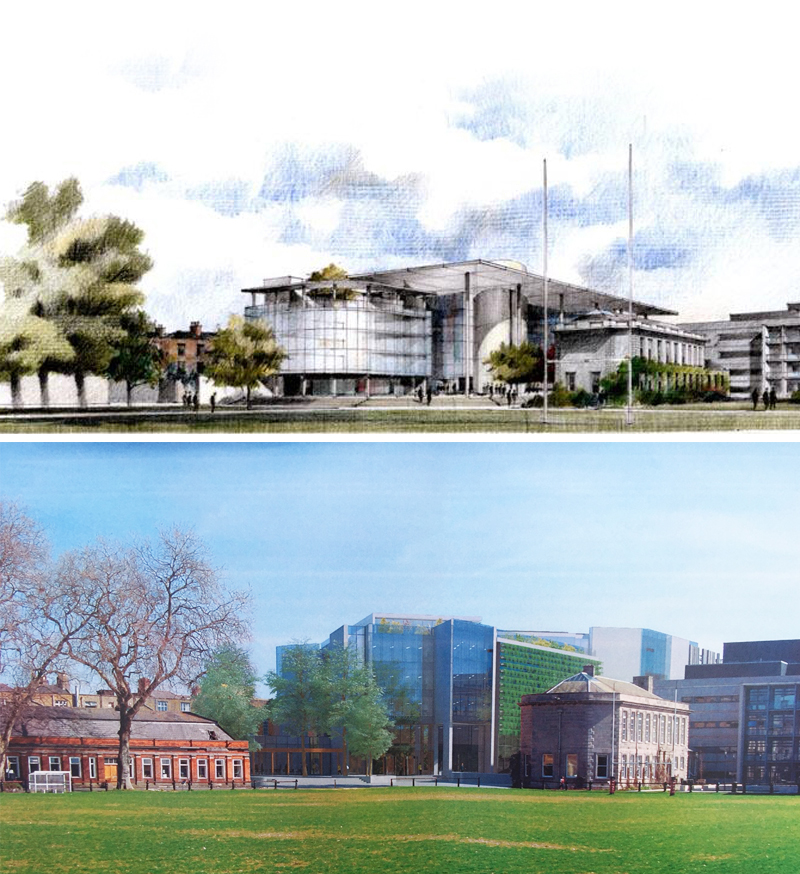 The original design, above, was considered to be “over-dominant” on the landscape. The new design, below, replaces the rotunda with a “splayed” elevation.

The building will be built primarily on the site of Luce Hall, which will be demolished. The Simon Perry Building, which houses some functions of the Department of Civil and Environmental Engineering, will also be demolished. As part of the project, the row of houses on 183–188 Pearse Street will return to their original purpose of student accommodation, with 24 student rooms created. The houses are currently used as office space. The functions of the Simon Perry building, the Pearse Street offices, and labs in Luce Hall will be temporarily relocated until they move into E3, the new Engineering, Energy and Environment Institute – which is only in the early stages of planning – according to Edwina Hegarty, the project manager of the building process. A location in the International Financial Services Centre, known as Stack B, will be used.

While the building has lost a floor because of issues with the Pearse Street skyline, the building has gained about 400 square meters in space because of the redesign and expansion into the basement, said Hegarty. Lacey commented on the considerable student “breakout space” in the building – a feature that has been lacking in many College buildings. He also commended the outdoor space outside the building, which aims to compliment the new outdoor student space by the Botany building.

A major aim of the building is to create an entrepreneurship and innovation hub. Projects such as Launchbox, the undergraduate summer incubator programme, will be given space in the building. Overall, the building will have six floors. The ground floor alone will include both a 600-seat and 140-seat lecture theatre and a 200-seat cafe.

As reported by The University Times in April, while the costs of the delay are estimated at about €150,000 per month, the building is expected to remain within its €70 million budget because of contingency plans. Speaking to The University Times this evening at one of the public meetings, the College Bursar and Director of Strategic Innovation, Dr Gerard Lacey, confirmed that this was the case.

Lacey, however, was not able to detail the costs of the redesign of the building itself. In an email statement in response to questions from The University Times yesterday, Lacey said: “As this process is still ongoing the cost of the design has not been confirmed.” The costs of the redesign will also be taken from the contingency budget.

The majority of the building’s budget is being funded by private donors, whose names have yet to be announced. Lacey said that they have given “huge, huge support” to the project.

Lacey said he was fearful that someone would object to the planning application, and the project would be delayed beyond September 2018, meaning that they would lose a full academic year in the building. He noted however, that there had been very little pushback from the local community. 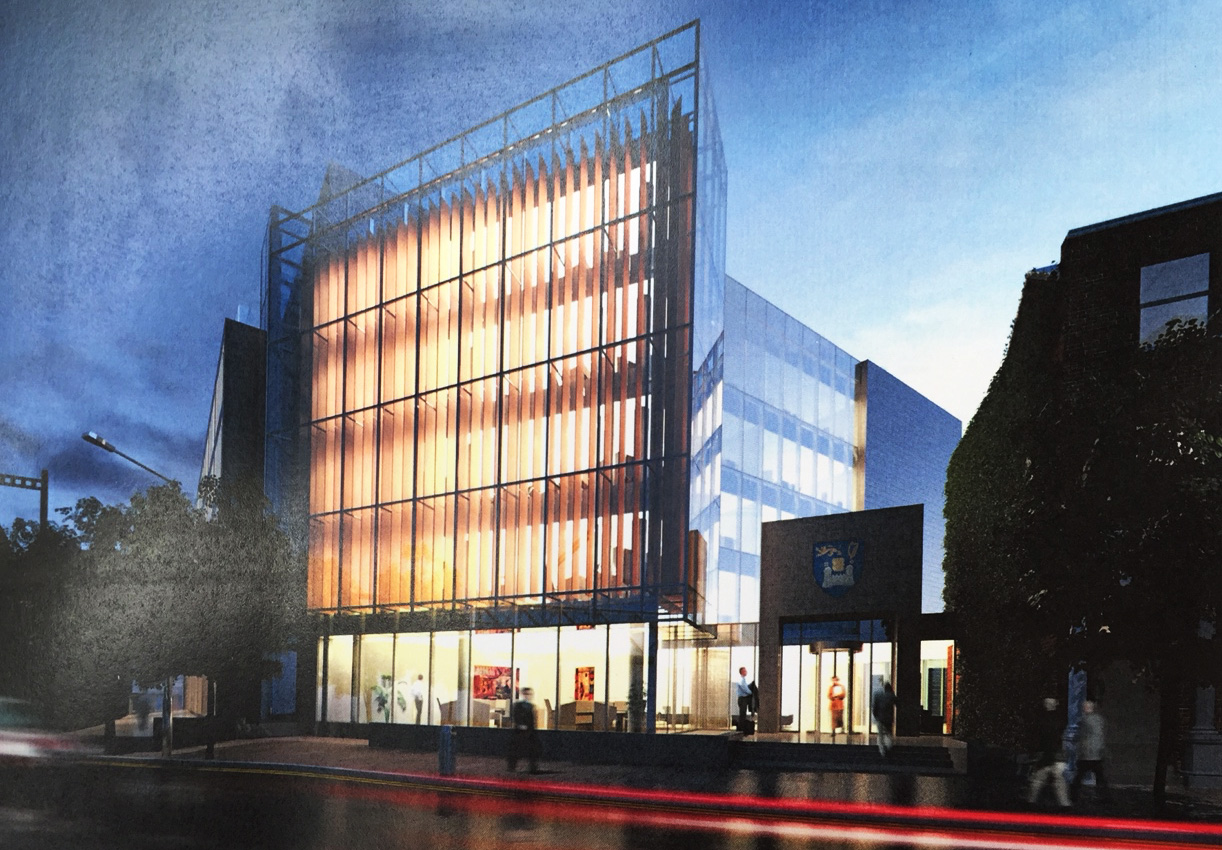 The Pearse Street side of the building, which will have a public entrance.

A College Board memo obtained by The University Times in April revealed that the board monitor employed to independently report on the progress of the project had criticised aspects of the planning. In a report filed on March 18th, Leo Harmon, a director at BAM Contractors, said it was unfortunate that parties involved were not listening to each other, and complained that they were being overly optimistic in their timelines.

In response, the steering group of the project appointed Greg Power, Trinity’s new Head of Capital Projects and Planning, to the team, which had “helped focus” the team, according to the memo.