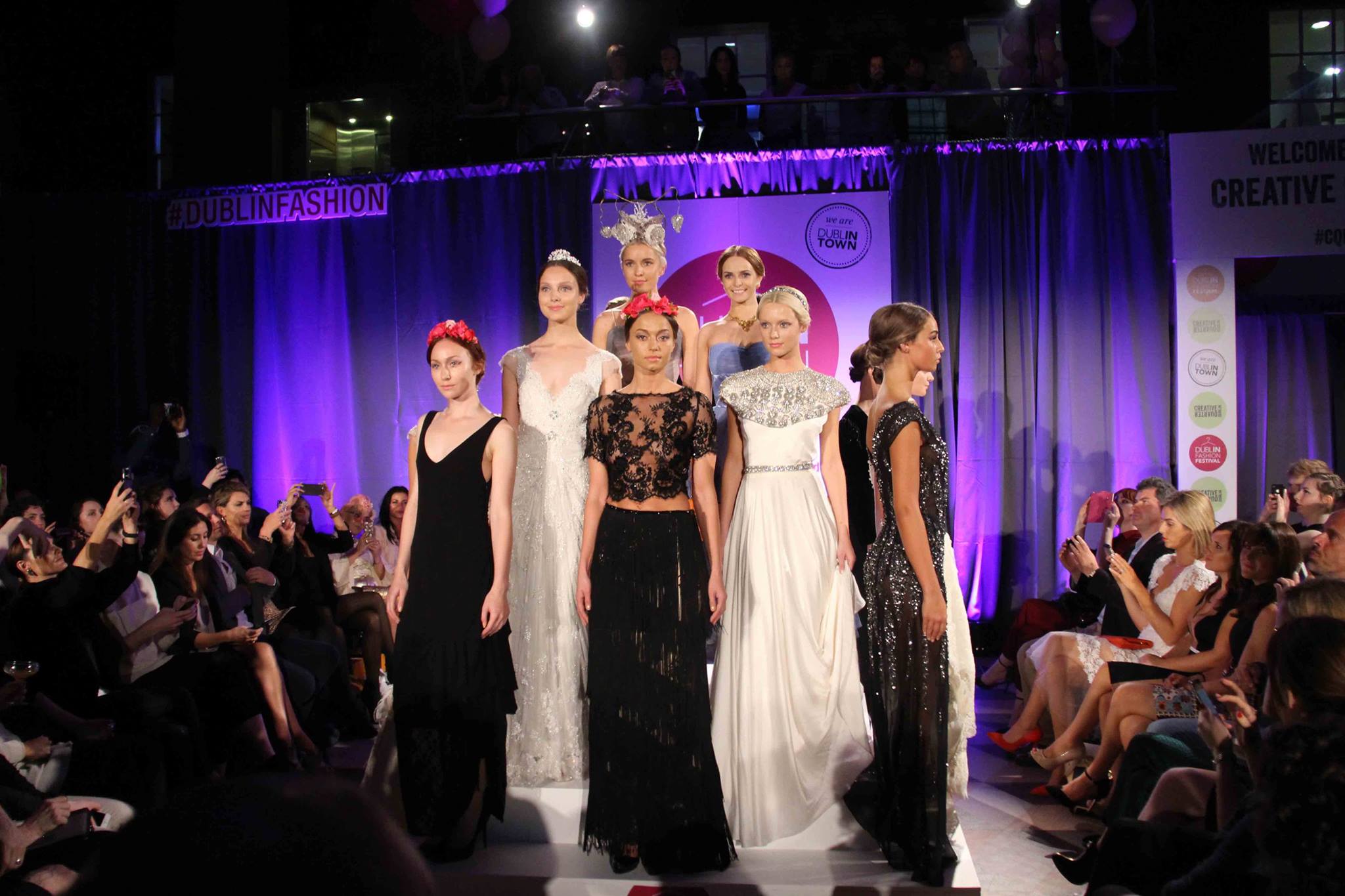 Models pose for photos at The Creative Quarter Fashion Show as part of the Dublin Fashion Festival.
Powerscourt Townhouse Centre

From the Design Centre upstairs to the perfect brunch spot that is The Pepper Pot, the Powerscourt Centre always has a few hidden gems on show. Last Friday night, at the Creative Quarter Fashion Show, this proved no different. Although there were technical difficulties that meant the event began fifteen minutes later than anticipated, it was well worth the wait once we stepped into 59 South William Street. From stepping right into The Garden Flower Shop to give our names to quickly being brought to pose for a picture the evening already seemed unforgettable.

Upon entering, I quickly went up to the second floor to have a peek at how the setup was going. The view was spectacular and perfectly symmetrical and Pippa O’Connor Ormond, the face of the festival this year, could be seen practising her speech. It truly was mad to think that a mere two hours ago customers were sipping on cappuccinos and deliberating over ribbons at A Rubanesque. After taking it all in, and several lazy iPhone shots later, I sauntered back down the stairs to reunite with the rest of the party and to discover what was being poured into the seemingly infinite number glasses I saw from above.

After a brief conversation with the bartender I found out that we were being served Absolut Vanilla, passion fruit purée and lime topped up with prosecco and vanilla sugar. It was definitely one of the more elaborate drinks served during the week and, of course, very fitting to the venue. Canon representatives were snapping and developing photos of the crowd throughout the night, only stopping when iRadio Breakfast DJ, Steven Cooper, started to hit the decks. We then began to make our way to be ushered into seats. Standing aimlessly outside All Saints, waiting wasn’t as boring as you’d think. The hustle and bustle of volunteers swarming trying to get everything done was electric and finally we were seated and waiting with anticipation for the show to start.

Dublin Town CEO, Richard Guiney, began the show, speaking to us about the importance of the Creative Quarter to Irish Design and Fashion. He compared it to major shopping spots throughout the world, proudly saying that even The New York Times acknowledges this excellence in design. Guiney then passed the torch onto Clyde Carroll, the festival’s marketing director. Carroll shared many similar sentiments, aptly pointing out individual shops and the thanking sponsors and volunteers who gave their time to make the festival a success. Pippa O’Connor Ormond soon after took to the stage wearing a white lace appliqué dress from Coco Boutique. She spoke about the last few days and how excited she had been to receive Clyde’s call. She couldn’t believe she was going to join the likes of Laura Whitmore and Angela Scanlon, two of our biggest exports, as the face of Dublin Fashion. She also thanked the sponsors who had dressed her for the various events and started the show off.

Looks from all around the Creative Quarter were being celebrated, from the very high-end Costume to the more student-friendly Dublin Vintage Factory. Trinity student Catherine Donnelly once again made an appearance at this year’s festival, wearing one of the opening looks from Costume. Coco Boutique had a strong appearance on the night with a beautiful quilted white skater dress with not-so-subtle lace detailing. The styling was impeccable but fun with looks that were clearly inspired by Breakfast at Tiffany’s and the 1920’s which were very reminiscent of this season’s collection by Marchesa.

Most of the celebrated looks were full length gowns, so the creative quarter is a definite must-visit destination before any college and society balls this year. Bridal collections from the Design Centre were beautifully displayed with over-the-top styling that somehow worked. Once again Coco Boutique brought a beautiful two piece black tie outfit to life, stunning black lace embellished crop top with an amazing fringe maxi skirt – an outfit that wouldn’t look out of place on Cara Delevigne. The Dublin Vintage Factory had a beautiful slinky sequin dress on show, with a velvet bolero that would fit like a glove at Player’s Ball.

The show finished with the models of the night gracing the podium-esque catwalk and posing there for shots to be taken. Clyde Carroll closed the evening, inviting us to stay in the Powerscourt Townhouse as long as we liked as the drinks would keep flowing so long as it was raining. I then took the opportunity to check out what was in the goody bags, provided by Propercorn and Naked Coconut Water. From a bright orange treasure chest of popcorn to spa slippers and a power bank, these companies clearly knew what the attendees were in need of.

As the party began to wrap up I had the pleasure of chatting briefly with Anouska Proetta Brandon, one of Ireland’s most influential style bloggers, and the very face of the festival, Pippa O’Connor Ormond. I collected our prints from the rep at Canon, and left number 59 South William Street into the rain, seeing the Creative Quarter in a whole new light.