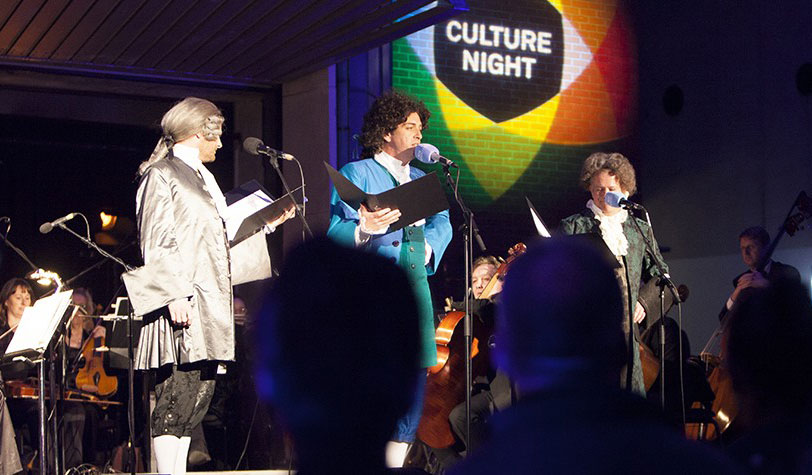 In honour of their tenth anniversary and their Dublin2020 campaign for European Capital of Culture, Dublin Culture Night has provided a diverse and exciting line up of events for Friday’s festivities. With over two hundred venues hosting free tours, gigs, exhibitions, workshops, performances and more, Dublin will be alight with music, art, dance, theatre, food, and heritage. From guided tours of Áras an Uachtaráin to an evening of spoken word at The Workman’s Club, the variety of events and venues offers entertainment and intrigue for a plethora of tastes.

The Phoenix Park and Museum Quarter offers a range of venues from traditional museum exhibitions at the Irish Museum of Modern Art to the tropical rave at the Generator Hostel in Smithfield. The BlueFire Picnic stands out among the list as a promising amalgamation of live music, street art, performers and workshops in the open air of Smithfield Square. On the eve of their annual street festival, BlueFire will be hosting a picnic celebrating the diversity of Dublin through art and culture.

On the more historical end of the spectrum, the Liberties and Historic Quarter invites visitors to explore some of Dublin’s preeminent cultural institutions, including the National Archives of Ireland, the Chester Beatty Library and Archbishop Marsh’s Library. Even Dublin Castle will have live performances of contemporary Irish music in its courtyard. The programme at Christ Church Cathedral offers guided tours of the medieval crypt and cathedral and choral music accompaniment with a multitude of gourmet food stalls in the Irish Village Markets outside.

Temple Bar and the Creative Quarter offer an eclectic mix of contemporary and traditional literature, music, theatre, art and literature. The Ark Stage in Meeting House Square will host RTÉ in Concert’s three-hour programme of interviews, poetry, music, drama, and comedy with performances from the RTÉ Concert Orchestra as well as various local artists. Aerial Cirque is offering to teach visitors how to fly… in aerial cocoons. Cooking tutorials at Afra-Eorpach invite interested parties to learn how to prepare and taste food from Africa.

Events in Monto and the North Georgian Quarter tempt a look into Dublin’s vibrant galleries and literary scene. Between the James Joyce Centre, The Winding Stair and the National Leprechaun Museum, Culture Night captures the breadth of subject matter and literary form emerging from Dublin writers and storytellers. Galleries such as The Olivier Cornet Gallery and Talbot Gallery and Studios will host events that allow insight into the often-mystical world of contemporary art through related performances and even direct engagement with a performance artist.

The Docklands represent an area where the cohabitation of modern and historical Dublin is most visually prominent. Culture Night events in this area reflect this juxtaposition with venues ranging from the Jeanie Johnston Tallship, the most famous famine ship, to the Windmill Lane Recording Studios, birthplace of some of the most famous Irish music from the past three decades. You can watch the currach and naomhóg races hosted by Oireachtas na Gaeilge on the River Liffey, and follow it with Flamenco lessons at the Dublin School of Flamenco.

The sheer volume and content of events in the Trinity and the South Georgian Quarter on Culture Night is overwhelming. Visitors can explore the culture offered within the walls of Trinity with guided tours of campus followed by trad music, a visit to the Book of Kells in the old library, a multilingual literature night at the Long Room Hub or a tour of the contemporary art exhibitions in the Douglas Hyde Gallery. Alternatively, the Grafton Academy of Fashion Design will celebrate the craft and art of design with workshops on sketching and demonstrations of sewing and pattern cutting in addition to showcases of their graduates’ collections.

This has merely been a small glimpse into the full list of venues and events happening around Dublin on the 18th of September. The 49-page brochure contains many more options to suit various interests, so go check it out online at culturenight.ie. To facilitate access to the various venues, Dublin Culture Night has teamed up with Dublin Bus to offer three free bus routes. Between the breadth of event types and the free transport, the tenth anniversary of Dublin Culture Night promises to be a night to remember.