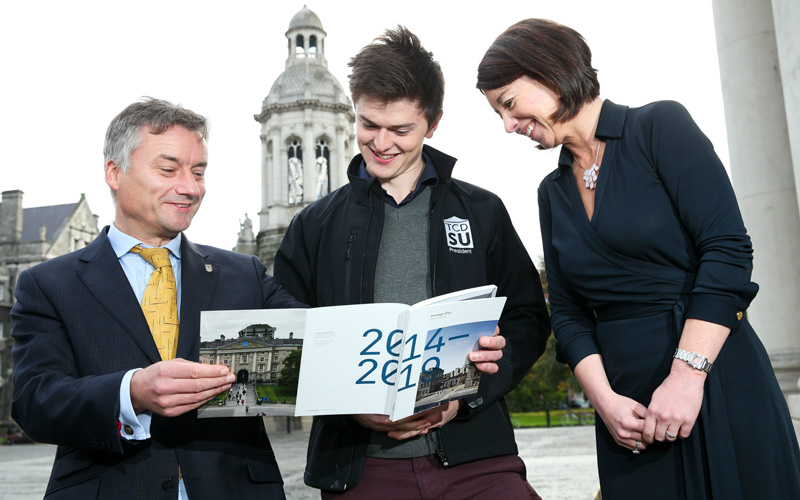 An appeal contesting the College Board’s passing of the student charges, submitted to the university’s Visitors in May by Trinity College Dublin Students’ Union (TCDSU), has received no reply from the Visitors, The University Times has learned.

On March 25th, the College Board passed a proposal to introduce a series of student charges. The proposal had been more than a year in the making, after a previous campaign by TCDSU delayed their introduction by almost a year. In April, Domhnall McGlacken-Byrne, the then-President of TCDSU, signified his intention to appeal the Board’s decision, and in May, he formally submitted an appeal to the university’s two Visitors.

In the appeal, a copy of which has been obtained by The University Times, McGlacken-Byrne claims that at the Board meeting in question, there was a “legally disputable level of consensus”, and points to the lack of a vote called regarding the student charges decision.

His claim rests on a section of the Universities Act 1997, which prescribes for the behaviour of university governing authorities. This section stipulates that if no consensus can be reached by the governing authority of the university, a vote must be taken on the issue in question. Given, he says, it was clear that no consensus existed, the Chair of the Board, Provost Patrick Prendergast, was mandated to call a vote on the proposed student charges.

He did not do so.

The Visitors, one of whom is always the Chancellor of the University, hear appeals made against decisions of the Board and other College bodies. The other Visitor, the Judicial Visitor, is typically an individual with extensive legal experience and is appointed by the government. The current Chancellor is Mary Robinson, while former High Court judge, Ms Justice Maureen Harding Clark, is the Judicial Visitor.

Responding in an email statement to a series of questions from The University Times, the College Secretary, John Coman, said: “On foot of the appeal lodged by the Students’ Union former President, College has prepared a written submission. The Visitors will consider both the appeal and submission. We are unable to comment further until this process is complete”.

Speaking to The University Times by phone on Sunday, Prof Eoin O’Dell, who is both Chair of the Fellows and an Associate Professor in the Law School, said that while the four months since the appeal may seem like an excessive duration, this does not necessarily mean it is being ignored: “It is not unusual for appeals to take a long time. The time limits in the statutes apply during term, but not during the summer, and very often in complicated cases the Visitors seek more information from one or other of the parties, usually the College.”

O’Dell chaired the four-year period of revision of the College statutes by the Statutes Review Working Party.

In response to a series of questions from The University Times, McGlacken-Byrne said that it was “imperative to have an expedient appeals process that is capable of dealing with contested issues in a contemporaneous manner. Those who disagree with decisions in Trinity are often told they are free to appeal this decision if they wish; however, this experience of attempting to do so would not particularly encourage one to do so again”.

The Visitors may refuse to hear an appeal if they believe it to be “ill-founded”, the statutes say. Some have expressed surprise that no formal reply or refusal has been communicated from the Visitor to the applicant, in this case TCDSU. Lynn Ruane, the current President of TCDSU, said that there is a real danger that the way the issue is currently being handled “will put off anyone that tries to go through the appeals process”. If the appeal takes much longer, she suggests College should reconsider “how they go about the process”.

Early indications of disagreement were seen in the minutes of the Board meeting in question, when a query was made “regarding consensus”. The Provost, the minutes say, “commented that the majority of the Board agreed with the compromise proposals”.

Between that Board meeting and the Board meeting of April 29th, McGlacken-Byrne signified to the College Registrar, Prof Shane Allwright, that he intended to make an appeal. The minutes of that meeting reflect further disagreement. Responding to a Board member, the Vice-Provost, Prof Linda Hogan, “advised the Board of the context in which the revised proposals on student charges had been prepared and presented to Board for approval”. The “distinction between recording a dissent and voicing an opinion was noted”, the minutes say, and “there had been consensus on the decision to approve the revised proposals”. Noting that the minutes of the meeting of March 25th were an “accurate reflection” of the discussion surrounding the student charges, it was also noted in the meeting that “a vote of the Board had not been requested” regarding the student charges.

But McGlacken-Byrne, in the appeal, argues that, where “consensus has not been reached”, the responsibility to call a vote is “explicitly bestowed on the Provost and not on Board members present.”

McGlacken-Byrne asserts, in the appeal, that “there is no recent precedent for an item to have received such a level of criticism at Board and yet to have been deemed to be agreed upon by consensus and thereby adopted. We assert that precedent instead demonstrates that the level of opposition outlined above is sufficient to prevent Board validly approving a given policy or decision”.

The lengthy submission, which runs to over twelve pages, outlines a number of areas where TCDSU felt that the discourse over student charges at Board was handled unprofessionally, without due respect for student representatives, and within a system that ignores criticism. The submission points to a discussion in which a commitment to supplement an assistance fund accessed by struggling students was threatened by the Provost, via the Vice-Provost, not to be fulfilled, as emblematic of the behaviour of the College in the run up to the student charges discussion at Board. Describing this as “distressing and most inappropriate”, the submission argues that this College attitude towards TCDSU officers threatens to suppress the ‘independence of thought’ celebrated by Trinity College’s mission statement”.

Additionally, a number of objections were raised about the handling of the student charges discussions prior to the Board meeting in which they were discussed. One of the most egregious accusations made by McGlacken-Byrne against the Provost’s handling of the issue is that, in one instance, he was refused permission to invite the College’s Senior Tutor to discussions, despite them being within her remit. The submission also states that at one point the TCDSU President was “admonished” for discussing the issue in a phone call with a member of the Finance Committee.

Minutes of the College Finance Committee on May 8th note that “no further action” was to be taken in relation to the student charges “until the appeal process [was] concluded”. The charges, however, have since been implemented.

The student charges approved include a €20 charge for replacement student cards, up from €6, and an increase in the postgraduate application fee from €35 to €55. The original set of charges included a €250 fee for supplemental exams. A compromise, however, was reached after opposition from students and TCDSU, primarily through an email campaign to Board members. In a referendum on the issue, which took place in February alongside the sabbatical officer elections, 80 per cent of students voted for the union to oppose the introduction of the charges.

If the Visitor does find that the passing of student charges at Board was invalid, and charges have been imposed without a proper basis, O’Dell states that by the “principles of the Law of Restitution, then College would have to refund these charges.”

McGlacken-Byrne expressed his disappointment that, despite the best efforts of TCDSU officers to educate themselves in the “structure and decision-making processes of Trinity”, and engaging with the “official appeals process”, these efforts seem to be unappreciated by College.