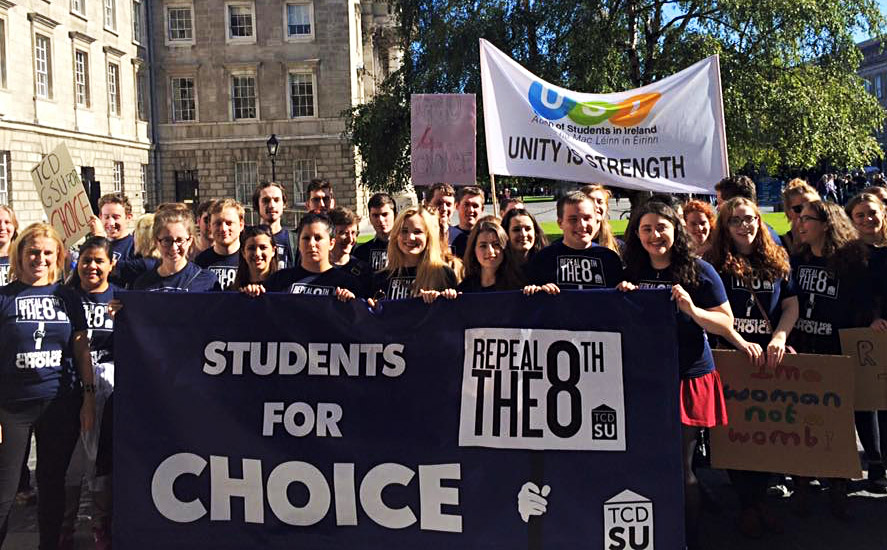 The TCDSU delegation in Front Square earlier, before departing for the Garden of Remembrance.
TCDSU Photo

Trinity College Dublin Students’ Union (TCDSU) has sent a large delegation to the annual March for Choice march for the first time. Today’s event, the fourth annual march organised by the Abortion Rights Campaign, marks the Global Day of Action for Access to Safe and Legal Abortion.

This comes as the union is to officially launch its own “Repeal the Eighth” campaign on Tuesday, October 6th. The union plans to play an active role in the campaign to repeal the eighth amendment, siding with an increasingly vocal movement among citizens and politicians alike seeking reform of the current ban.

The union led a delegation to the Garden of Remembrance earlier this afternoon, where the march was due to begin at 2pm.

TCDSU has a pro-choice mandate following a referendum on the issue held in February 2014. 73 per cent of students voted for the position that TCDSU advocate abortion under any circumstances. Many students, however, argued that the union should not have a stance on the issue as it did not directly affect students. One student-penned open letter addressed to Provost Patrick Prendergast called upon him to prevent the union from holding the referendum. The no campaign in the referendum, which advocated this neutral platform, was defeated.

As part of the campaign, leaflets outlining the union’s support for the repeal of the eight amendment were distributed as part of the union’s freshers packs last week. The campaign is primarily being spearheaded by TCDSU President, Lynn Ruane.

Ruane has set up a repeal the eighth “Steering Committee” for students interested in getting involved with the campaign. A Facebook group founded by Ruane for the same purpose has more than 240 members.

The eighth amendment, which amounts to a constitutional ban on abortion even in cases of rape, incest and fatal foetal anomaly, was passed by referendum in 1983 in an attempt to preclude the possibility of future legislation towards liberalisation. Despite the Protection of Life During Pregnancy Act 2013, which permits abortion in circumstances where the pregnancy causes a risk of suicide by the mother, access to abortion in Ireland is still severely limited.

As part of a similar, ongoing TCDSU campaign, leaflets promoting the importance of sexual consent were also distributed as part of the union’s freshers packs last week. Outlining practical guidelines on sexual consent, they explained what it is, how to recognise it, and how to ensure that it has been given before engagement in any sexual contact. The material also places great emphasis on definitions of sexual assault, sexual harassment and rape as well as the potential legal consequences of these crimes.

The leaflet also provides key details of the immediate and ongoing support structures available to victims of sexual offences offered by TCDSU and College authorities, as well as those provided by the Sexual Assault Treatment Unit and the Dublin Rape Crisis Centre. The material identifies key points of contact, such as the TCDSU Welfare Officer, the Graduate Students’ Union Vice-President, College tutors and the Junior Dean, as well as highlighting the role of the Student Counselling Service in aiding student victims of sexual assault.

The Union of Students in Ireland (USI) also recently launched its own campaign on the issue of sexual consent. The campaign, entitled “There are no Grey Areas – #ASKCONSENT”, promotes the message that sex without verbal consent is rape. USI adopts a tougher stance to TCDSU’s campaign who, in their leaflets, define consent as “expressed through a physical or verbal cue that clearly indicates that a person wants to have sex or be touched”.