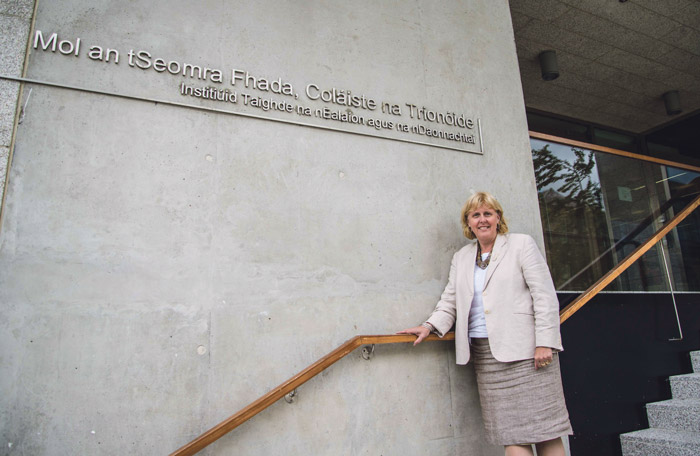 Prof Jane Ohlmeyer has been appointed Chair of the Irish Research Council.
Sinéad Baker for The University Times

The appointment of Trinity Professor of History Jane Ohlmeyer as Chair of the Irish Research Council is a significant one not just for Ohlmeyer herself, or for Trinity, but for the nature of research supported and undertaken in Ireland. An experienced expert on New British and Atlantic Histories, Ohlmeyer describes herself as “a frontline Historian, a frontline academic” who focuses on basic research, so the appointment is an astute one.

While the disconnect between those who undertake research and those who award research funding is often lamented, Ohlmeyer sees her appointment as a move by the Irish Research Council to break this trend. Sitting down with The University Times she speaks of the importance of a focus on teaching in research, and the coexistence of the two. “I’m as committed as a teacher as I am a researcher,” she says. “You never want to create a two-tier system where you’ve got some people just doing research and some people just doing teaching. I honestly believe that the best researchers are the best teachers, and the best teachers are often the best researchers”.

That Ohlmeyer will continue to teach and to conduct her own research during her three-year term is notable in this sense, as it gives her the chance to represent the academic community while remaining active in that community itself. The nature of this position appears to evade much of the criticism that research institutes face, in which applied research, which favours industry, is prioritised over fundamental, basic research. Ohlmeyer asserts that “one of the exciting things about the Irish Research Council is that it funds basic research. It’s about excellence. I’m a 17th century Irish historian, and I think it’s very interesting that they have appointed somebody who is a very fundamental, basic researcher. It’s not applied research, although I have worked with industry”.

For Ohlmeyer, “it’s about excellent basic research, and out of that will flow the applied research. This is a very strong signal on their part that that’s where their priority is”. The question, however, of how research funding is distributed cannot be avoided. Ohlmeyer highlights the cuts to research funding in recent years, stating: “I don’t think that we have nearly enough research funding, so I would like to see more research funding coming in to the Irish universities.” She warns, however, against relying too much on one income stream: “I would like to see increased philanthropic funding coming into Trinity, as well as other forms of funding. Non-EU student income represents a very important income stream”.

Ohlmeyer was the founding Vice Provost of Trinity’s Global Relations Strategy, a position she served in from 2011 to 2014. The strategy, which aims to put Trinity at the forefront of internationalisation and student connectivity, was met with slight controversy upon its inception, with the strategy being perceived in some corners as a cynical move and as a potential cash cow. Years later, however, such concerns appear to have been soothed, and, as Ohlmeyer highlights, “the reality is that you’ve got to be able to fund universities and, in the absence of adequate government funding coming in, it’s a very important income stream”.

For Ohlmeyer the strategy “was about generating non-exchequer income for the College so we can build a bright future for you all. But part of that, of course, is about building relationships for Ireland and for Trinity globally. Once a student from Brazil, or from India, of from Mexico or from the United States has spent years here that link with Trinity and with Ireland is for life. I think it’s so important to build these global relationships. The key for me was to turn it into a win–win”.

She highlights the tangible success of the strategy in terms of Trinity’s position in global rankings. Trinity rose in the area of internationalisation – “the world is noting that Trinity is engaging globally” – as well as in the area of reputation, which is assessed by colleagues around the world – “that global presence is having a very positive impact on the rankings”. She also notes the continued success of the arts and humanities on a global scale: “All of these areas that we don’t really ever talk about very much are precisely the areas where you see Trinity year on year getting stronger and stronger”. She adds: “It’s something to celebrate because times have been so tough, for everybody, that when you do have these successes let’s celebrate them. Obviously we want the rankings to approve across the board, but the arts and humanities have done extraordinarily well.”

Ohlmeyer has a vested interest in the arts and humanities, given her own background in History and her current position as Erasmus Smiths’s Professor of Modern History. In light of this, her appointment is given new significance, solidifying the importance of arts research nationally.

Ohlmeyer is fully aware of this, and the significance of the research undertaken in the arts and humanities as the Director of the Long Room Hub, Trinity’s arts and humanities research institute. She highlights that, as part of this role, she’s learned that “the most exciting innovations come where disciplines meet and collide”. In her involvement in the hub, she’s “worked with physicists, mathematicians, computer scientists, and I never thought that I would ever do that. I’ve found it extremely rewarding because it allows me to go back to my own historical data and to interrogate it, to ask very different questions of it. It’s a very mutually beneficial relationship.” She adds: “I think that’s something the Irish Research Council really wants to promote and it’s certainly something that we’re promoting here in the Hub”.

Ohlmeyer’s involvement with the Long Room Hub demonstrates her talent for successfully bringing in large amounts of research funding for the College. Having originally designed the concept of the building, working with colleagues, Ohlmeyer successfully brought in €11 million for the hub. For Ohlmeyer, it is “the great beacon of Trinity’s commitment to the arts and humanities but also the Irish government’s commitment as well, because it’s ultimately government funding that put this exquisite building here in one of the most iconic spaces. And here we are, named after the Long Room which is one of the most exquisite buildings in the country”. The success of the Hub, and her recent appointment represent, for Ohlmeyer, “a very powerful statement about what they value and what the arts and humanities community does”.

Despite her own background in the arts, however, Ohlmeyer advocates the development and enhancement of fundamental research in all areas: “We need to start focusing on basic research, on fundamental research. I don’t care if it’s on archaeology or on zoology or in physics or in whatever. It’s about excellence. The fact is that Ireland has a tradition of being particularly strong in the arts and humanities is great, and you want to build on that, but not at the expense of developing new areas – whether, it’s technology or neuroscience or nanoscience.” Ultimately Ohlmeyer wants to see Ireland’s researchers in all fields be successful on a global scale: “You want them to be able to go into Europe and compete with the best.”