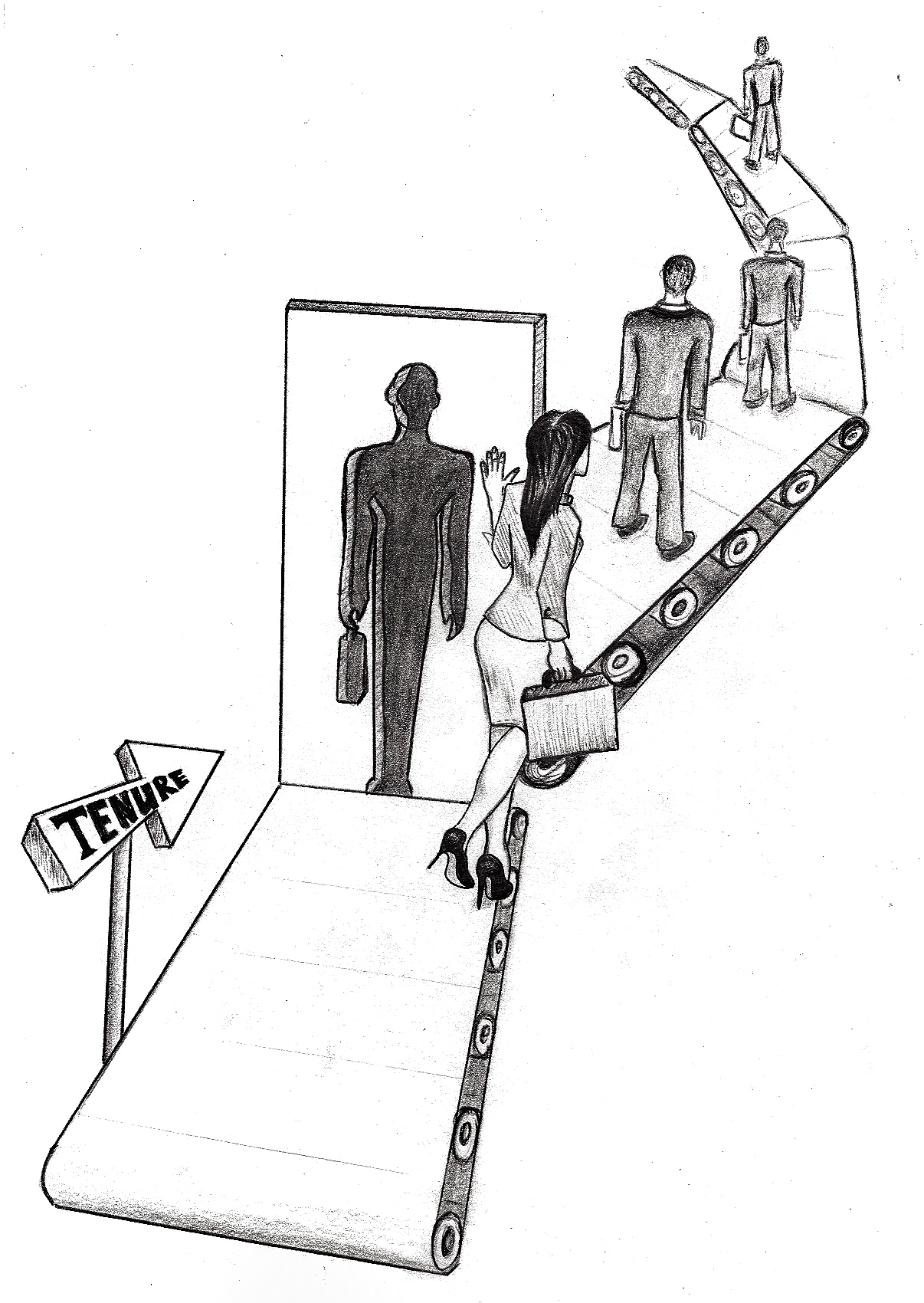 Illustration by Sarah Larragy for the University Times

Trinity College Dublin is to introduce a “tenure track” for academic appointments. What this means is that after doing an undergraduate degree (typically four years), a doctoral degree (typically at least four years), having research publications and teaching experience (perhaps over another three or four years), an applicant may be offered five years’ probation. They may or may not get a permanent job after this.

This prolonged period of career instability is likely to be financially and psychologically difficult.

Trinity College Dublin has indicated that if women go on maternity leave, the “tenure clock” will be stopped. What this means is that if a woman has two or three children, she could still be on probation when she is almost 40. This prolonged period of career instability is likely to be financially and psychologically difficult. Under this new system, the permanent careers of highly competent educated women may never start.

It is not clear what problem this new system is intended to solve. Women are more likely to go to university and do better than men there. Women academics make up roughly half of those at the lowest permanent level in Trinity (i.e. on the lecturer pay scale) as in most other Irish universities. The blockage at Trinity is between the second highest academic position (45 per cent women) and the highest academic position of (full) professor (14 per cent women). Why is priority being given to changing structures at the initial stage, where gender balance exists, than at the (full) professoriate level where it does not exist?

Under the proposed new system, the Head of the School will conduct performance reviews at the end of first and second year. Such reviews are done annually on all academics anyway. At the end of the third and fourth year in the proposed new system, performance will be reviewed by a panel of increasingly senior academics. They are most likely to be men. We know that there is a well-established tendency for men to identify with and to appoint people like themselves – in other words, men. Typically, in most other universities, an attempt is made to ensure some gender balance, with international experts who happen to be women being on interview boards. Such strategies have no place in the proposed system.

What implications will this have as regards the future shape of the university?

It is not clear how Trinity will ensure that the criteria that will be used will not favour men in the male-dominated university system. Will fewer candidates get tenure in predominantly female areas such as languages than in predominantly male areas, such as information communications technology? What implications will this have as regards the future shape of the university?

Tom Boland, Chief Executive Officer of the Higher Educational Authority, sees gender inequalities as a systemic problem in Irish higher education. The failure to utilise women’s higher educational achievements is seen as reducing research innovation and limiting economic growth. Women do not move into positions of academic or managerial leadership in higher education in general, and in universities in particular. A five-year probation at the initial stage will do nothing to solve this problem.

The scarcity of women in science and technology in particular has been widely recognised yet, it appears that this is the area that is seen as most likely to introduce a five-year probationary period. That probation is likely to start at an age which coincides with childbearing and intensive childrearing. This will reduce rather than increase the proportion of women in these areas. Structural change without tackling culture is never a successful formula.

One of the characteristics of US and UK systems of higher education is their high level of casualisation. This five-year probation will feed into this. Are these the kind of non-careers we really want for our high-achieving young people? Does Trinity really want to create structures that prevent bright, well-educated young women from having children and a career? What else is a five-year-plus probation in their thirties going to do?

Claiming that such a system is helpful to women beggars belief.