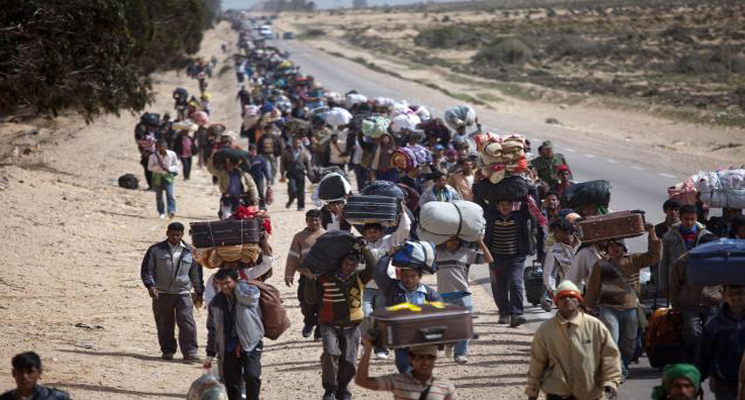 Last Tuesday, Trinity College Dublin Students’ Union council voted in favour of a motion to promote the education of asylum seekers and refugees in Ireland. Brought forward by DU Amnesty and the union’s International Students Officer, the motion seeks to raise awareness and ultimately lobby College to act on this issue.

This is an important step as the refugee crisis continues to spiral out of control. As the Irish government makes few concrete plans to resolve the crisis, students have a role in putting pressure on decision-makers. While refugees who arrive in Ireland have many struggles to overcome, one of the most prominent is in the area of education. Refugees in Ireland must meet the Ordinary Residency Requirements, which state that an individual must have lived in the EU for three of the past five years in order to qualify for EU citizenship and thus move from prohibitive international student fees to the far more manageable student contribution paid by EU students. Azzad Izzeddin – a graduate and a refugee from Syria – got a place in Trinity, but was turned away when he was unable to pay the exorbitant international fees. He intends on waiting three years and then re-applying. His case is far from unique. And those who can pay the fees – a group likely to be few and far between – are still likely to stumble on the price of rent. Dublin’s terrible housing market hits hardest those with nowhere to fall back on, other than inadequate Direct Provision housing far from the university.

UK students have been collecting money and marching to show solidarity and try to change government policy.

In the UK, the government considers you to be an EU student from the moment you are given refugee status. What’s more, Warwick, York, Sussex, Edinburgh, the School of Oriental and African Studies and the University of East London have all decided to give scholarships to refugees. Oxford has additionally given academic positions to Syrian refugees, just as they did when Einstein was fleeing Germany. The Council for At Risk Academics, a UK charity, has focused on Syrian refugees in the past year and has secured refugee status and academic positions for people fleeing Syria. UK students have been collecting money and marching to show solidarity and try to change government policy. The universities taking refugees in are also providing specific services for them to help them adapt and begin rebuilding their lives.

What have we done so far on this side of the Irish Sea? Not much. Trinity’s societies – SOFIA, The Phil, The Politics Society, FLAC – have hosted events focused on the refugee crisis. However, the focus of these is mostly on informing public debate on the subject of refugees in general as opposed to concrete action to help refugees or to raise awareness on the subject of refugee education. The motion passed by TCDSU’s council is an important first step, but it is certainly not enough.

The first and most obvious thing this university can do is waive fees or grant scholarships to refugees, regardless of their EU citizenship status.

Trinity can surely do more and play an important role, just as major UK universities are doing. The first and most obvious thing this university can do is waive fees or grant scholarships to refugees, regardless of their EU citizenship status. However, in the face of financial challenges one can see how Trinity might be reluctant to take this on. In that case, the SU ought to lobby government to bear the burden, and students should mobilise to support these young people, who are fleeing horrific situations and looking to educate themselves. The government has a clear interest in turning refugees into educated and tax-paying workers as quickly as possible. While they are in Direct Provision, the state foots the bill. The government has the power to speed up the process. Taking advantage of this would be beneficial for all concerned.

Jerome Wynn-Morgan, Campaigns Co-ordinator for DU Amnesty S.O.S. Europe, who collaborated on the motion for TCDSU’s council noted that it was “broad so it could be the base for different forms of action”. Lobbying the government to give refugees the EU student status immediately and for better treatment of refugees generally would clearly enter under that remit. Now that the motion has passed and students have evidently shown their support for the promotion of refugee education, it’s integral that the union takes advantage of this mandate towards action. The most disappointing outcome would be if the union limited itself in any way. Whilst actions such as creating a Refugee Officer position would be useful, it would serve a limited number of people. Whilst difficulties in college are a barrier to college, at present most people aren’t even making it past the first hurdle of obtaining refugee status and the second hurdle of fees. Confining ourselves to this easiest option would be ignoring the greater problem.
Passing this motion is acknowledging that there is a problem and that we want a solution, but it is not the solution itself. We need to keep a focus on this important issue and speak up so that it remains on the agenda. If the UK universities can do it, so can we. Let it not be remembered that Trinity did nothing while others took action to help those in need.