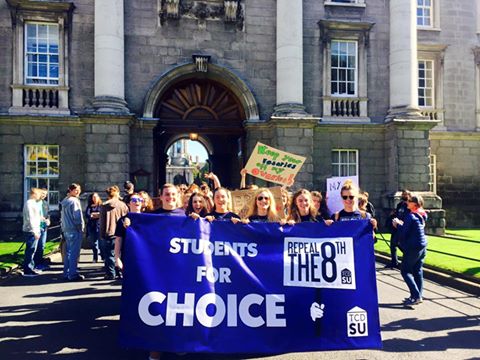 It would be somewhat ineffectual at this stage to pen yet another article which simply illustrates how important it is for Ireland to repeal the eighth amendment. That the current ban on abortion is an issue of deep-seated gender inequality, an issue of the denial of a basic fundamental human right, and an issue which leaves Ireland the only nation in the world with a constitutional ban on abortion is a familiar rhetoric.The current situation for those seeking abortions is not just a social issue, but explicitly affects and discriminates against the student population. There is a distinct lack of dialogue surrounding this fact.

The United Nations has called for it, the majority of the Irish public are calling for, it but there is even more reason for us as students to support this campaign.

University is a pivotal time in a young woman’s life. For many, it is the first time living away from home, experiencing new types of independence. There are new social and academic freedoms, and often more sexual freedoms as well. A crisis pregnancy for a young female student could have immeasurable emotional, academic and financial repercussions. Statistics show that 32 per cent of women who went to England and Wales to seek abortions in the last year were aged between 16 – 24; a significant proportion of these women would have been students. Young women, just like us, could very easily experience an unexpected and unwanted pregnancy which could lead them into emotional, academic and financial difficulty.

When faced with the cost of travelling abroad for this procedure, not to mention the expense of calling foreign helplines and of missing time at work or at college during the procedure itself, where can students turn?

The financial implications of an abortion in the current system do not deter the women of Ireland. They merely make it an ageist and a classist issue. Students are often not financially independent, sourcing their income from part-time work, grants, or their parents. So when faced with the cost of travelling abroad for this procedure, not to mention the expense of calling foreign helplines and of missing time at work or at college during the procedure itself, where can students turn? A friend and her boyfriend jokingly christening her savings account “the abortion fund”, until they realised this was a frighteningly real possibility and the name was dropped.

Despite the clear student-centric consequences of the lack of free, safe and legal abortions, there is relative confusion about the practical steps that can be taken by the student body.

There’s also the emotional strain of going abroad and feeling isolated and stigmatised by the very society we live in, the society most of us were happily brought up in. It is this isolation and stigmatisation which is truly detrimental to a young woman’s mental health, not the procedure itself. A woman should not have to prove herself suicidal in front of a panel of doctors in order to seek what is, in the rest of the developed world, a simple medical procedure. A woman’s health and wellbeing should not become a priority only when it is under threat.

Even still, despite the clear student-centric consequences of the lack of free, safe and legal abortions, there is relative confusion about the practical steps that can be taken by the student body. It’s not through lack of caring, but simply not knowing just how to help.

Indeed, there is an assumption present in much of the literature about the campaign to repeal the eighth, which often forgoes explaining what the eighth amendment actually is and what the practical steps to repealing it should be. When speaking to some of my peers on the subject, some students admitted that they did not know what the eighth actually was, or even that it was specifically about abortion. This confession was particularly prevalent amongst young male students. It is paramount to remember that this issue affects anyone who has ever had a girlfriend, anyone who has ever had a female sexual partner, anyone who has a mother, sister, or a female friend.

To those who feel strongly about the issue, I urge you to discuss the repeal campaign with not only like-minded friends, but also those who may not know much about the matter, or have fully formed opinions on the matter. When eventually repealed, the eighth amendment victory will not be credited to the conversion of religious conservatives. Instead, it will be won by tapping into the conscience of those unaware of the constitutional oppression of women in Ireland, and encouraging them to trust the women of Ireland with their choices regarding their own reproductive health. For those of you looking to get involved on a more official level, the TCDSU Repeal the Eighth campaign has recently begun, and holds it’s doors open to any new members.

Another bitter irony for students in relation to the repeal of it eighth is that, despite it being an issue that directly affects us,it is also an issue on which we have never had the opportunity to exercise our democratic rights. While we did not have a say when this amendment was written in, we can have a say on when it is taken out. With the general election imminent, and hopefully a referendum soon after, question your TDs when they call to your door, write to them, make it clear it any way you can that you cannot support a political party that would continue to ignore women’s reproductive rights.

Students are synonymous with social change. Trinity students – and indeed students all over Ireland – have long been championing causes of social justice, from Vietnam to birth control, apartheid to austerity. Repealing the eighth amendment is also a call for justice. Justice for women like Savita Halappanavar, whose lives were tragically lost, justice for the thousands of women living in shame and stigma, and the brave women like Tara Flynn and Roisin Ingle who tell their stories in an appeal for change.

It is embarrassing that Ireland remains an archaic anomaly on the developed word stage, where women’s reproductive rights have long been recognised. This is not just a social issue, but an issue that directly affects students in a variety of different ways. And if we, the young students of Ireland, do not act – who will?