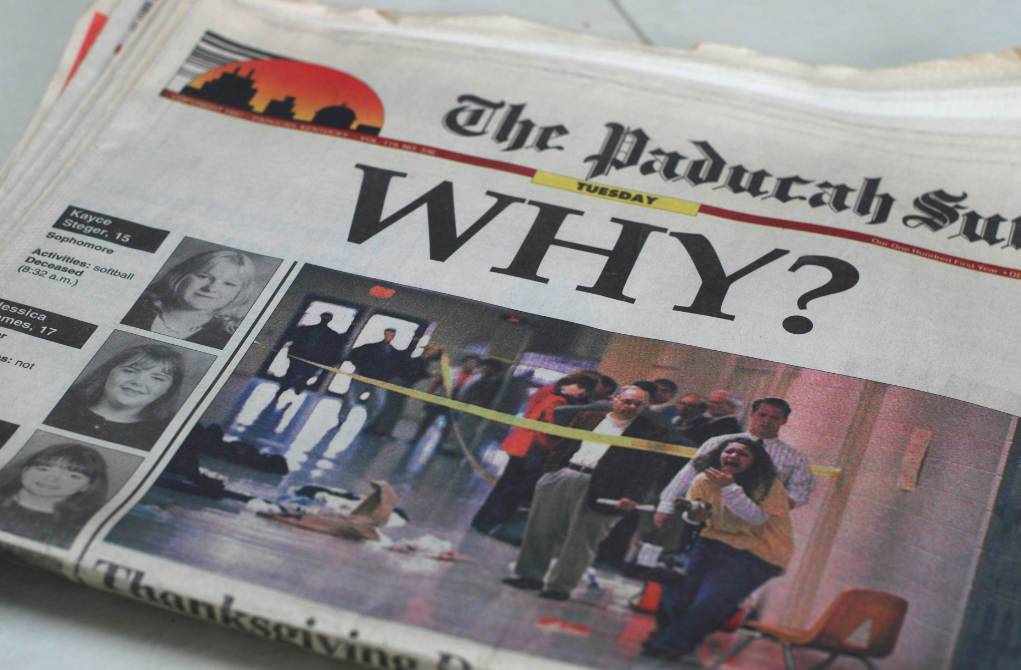 Last week, a group of innocent students and staff were tragically shot dead at Umpqua Community College in Oregon by a student who is believed to have had underlying mental health issues. Among the students killed were Lucero Alcaraz, an aspiring nurse, Glen Cooper, a martial arts pro, and Lawrence Levine, who loved the blues. The killer died by suicide at the scene.

This is a factual description of last Thursday’s heartbreaking events but it’s probably not how you received the information. Why? Because this retelling deliberately makes no mention of the killer’s name, includes no extensive personal information about him, and instead provides information about some of the students and staff who were involved in the event. It includes no dramatic commentary from passersby and does not begin with a death count.

How we retell events matters and how we report and respond can affect the chance of this figure rising.

There have been 299 mass shootings in 286 days in the U.S. so far this year. How we retell events matters and how we report and respond can affect the chance of this figure rising. Far too often, the media revels in giving these sick individuals the starring role in their own twisted fantasies. The “misunderstood” individual who was always “excluded” by classmates, the “loner” type , the “angst-ridden” teenager at odds with the world – these are all-too-common taglines. Why do we insist on romantically “othering” these individuals? We willingly give them their 15 minutes of fame with 24/7 news coverage when this is exactly what they want. And it can have serious consequences.

In 2009, there was an infamous BBC documentary where comedian Charlie Brooker picked apart the mistakes in the reporting of a German school shooting. He condemned the appallingly bad coverage of what was, after the initial factual report of the shooting, a non-event. Even footage of the perpetrator playing ping-pong was considered ‘news’, revealing the media’s obsession with normalising the killer to further the tragedy and make it more intriguing still. So that newspapers would sell, TVs would be watched, links would become clickbait and website views would be through the roof. Because isn’t that what it’s all about?

In this documentary, a forensic psychologist explicitly warned of the dangers of such reporting. With “saturated media coverage”, there is a danger both of copycat shootouts and contagion – shoot-outs that happen in quick succession. After every shootout in the US there are at least one or two that follow in quick succession, it’s just that you don’t hear about them – as copycat coverage isn’t quite as attention grabbing.

It’s remarkable that even the Wikipedia page for the Sandy Hook school shooting in 2012, currently the deadliest mass school shooting in the US, reads like a crime thriller. The narrative tracks the killer’s every move and dramatically reports the cries of staff and students. Sure enough, the page also reveals that the killer in question had thoroughly researched the 1999 Columbine school massacre, a shooting which previously held the title of most deadly.

When it comes to individual and isolated acts of terror, we must take more care in how we represent the events.

So when do we cross the line between reporting and sensationalising? It’s hard to tell. The likes of VICE and the Daily Mail often propagate exaggerated and sensationalist news which only serves to fill our insatiable desire for gossip, however tragic or obscene but when it comes to school shootings, when it comes to individual and isolated acts of terror, we must take more care in how we represent the events. It’s toxic to keep filling ourselves with these terrifying clichés, “he was just a normal boy” or “she was just a bit of a loner”. More importantly, it is toxic to the minds of the small but terrifying proportion of potential killers that do lie within our society. The public craves it and news outlets provide it but how many more of these horrible tragedies will it take to realise that the more interest we show, the worse the problem will get?

Ultimately, just as the media has an ethical responsibility to change the way it reports on these issues, we also have a responsibility not to indulge in their sick fantasies. At the very least, we should try to fill our minds with names and stories of those who fought against or fell victim to these evils. It is not the names of the killers but the names of the real heros, the victims, who must be revered and remembered for the safety of others and for the safety of our own minds.