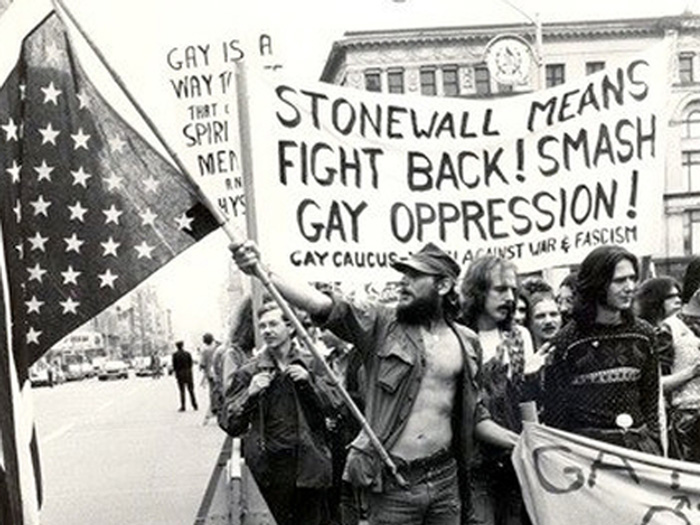 At 1:20 am on June 28th, 1969, eight police officers arrived at the Stonewall Inn in New York. The raid and riot that followed went down in history and is dubbed by many as a game-changing moment in the modern-day LGBT rights movement. These raids were not unusual, but this time the patrons of the club fought back. And this was the catalyst which sparked the first pride marches the following year.

Roland Emmerich’s 2015 film “Stonewall” rightly bombed in cinemas, thanks to boycotts and terrible reviews, because they whitewashed from history and relegated to the sidelines many pivotal people of colour and gender non-conforming individuals who were part of the riots. The LGBT movement globally has often been guilty over the decades of being exclusionary when it came to trans people, people of colour, other sexual minorities and women.

The road to full inclusion of identities within the LGBT community in Ireland has been long and it still needs improvement. Taking the student movement as an example, student societies in Ireland started out as “gay” societies in the 1980s, and the words “lesbian” and “bisexual” were added later. It’s really only in the last decade that these societies have truly become inclusive of the “T” for the transgender community, with many debates in the early noughties as to whether the “T” should even be included at all. Many argue that we have too many letters now and it’s becoming a bit of an alphabet but this is indicative of how diverse the community actually is. Trinity’s Q Soc have opted to use one letter to represent all persons who are non-conforming when it comes to gender or sexual orientation, which is very inclusive. But it’s important that we don’t forget how hard people had to fight initially for their specific identities to be included, and the power that one word can actually have.

It’s important that we don’t forget how hard people had to fight initially for their specific identities to be included.

The current government has been excellent when it comes to LGBT rights, passing the Children and Family Relationships Act, the Seanad stage of the Employment Equality Bill, the Gender Recognition Act and the successful referendum on marriage equality. Minister Aodhán Ó Ríordáin has also signalled his commitment to creating a national LGBT strategy. There has certainly been a lot of work done, but there’s also a lot more to do when it comes to LGBT equality in Ireland.

Transgender Equality Network Ireland (TENI) has campaigned very successfully and we were lucky to have a Trans-specific organisation working on this issue. Ireland is now third in the world when it comes to gender recognition provisions, after Argentina and Malta. Ireland has better gender recognition laws than Denmark where no provision for under 18s is provided and where you have to wait 6 months for a certificate. In Ireland there is provision for 16–18 year olds, though it’s more of an onerous process, and over-18s can get their certificates completely sorted in less than three weeks – a huge development.

This year also marked the third year of the Trans Pride festival in Ireland and TENI had a whole weekend festival dedicated to Trans Pride this year. The Irish Student Trans Alliance (ITSA) also had a training event in TCD this year which by all accounts was very empowering. The Minister for Education and Skills, Jan O’Sullivan, and Minister Kevin Humphreys held a roundtable this month with LGBT organisations and education partners on transgender issues in schools – the first time such a high-level meeting occurred. I spoke to Broden Giambrone, Director of TENI, and he told me that the inclusion in the Gender Recognition Act of non-binary, young people and intersex individuals is the next campaigning step.

Ireland is now third in the world when it comes to gender recognition provisions, after Argentina and Malta.

The MSM blood ban, where men who have had sex with men are banned for life from donating, is an equality issue that needs to be addressed and LGBT groups have long campaigned on this. The lifetime ban was introduced at the height of the HIV epidemic in the 1980s. Despite the introduction of a deferral in the UK, Ireland’s ban remains in place. In July of this year, Tomás Heneghan, a 23-year-old student, took a case to the High Court on this issue.

Mental health is still a huge issue for the LGBT community. The 2009 “Supporting LGBT Lives” study found that 17 per cent of lesbian and gay people had attempted suicide. For bisexuals, this figure is 25 per cent. Over one quarter of those who identified as trans had attempted suicide and of that figure most had attempted it more than once. Investment in mental health services and education will be critical for the future.

We can’t have a situation where we are all on the equality bus now, but some members of the community have to sit at the back. There is a whole spectrum when it comes to sexuality and gender that we simply just haven’t dealt with or accepted yet in society.

Bi-erasure is the order of the day when it comes to LGBT rights across the globe. Where are all the bisexuals, and why are they not more visible? There is still a lot of stigma attached to being bisexual with many experiencing double discrimination from both the LGBT community and wider society. Humans are obsessed with labels and categorising people. Statements like “you’re just greedy” or “just choose” are comments heard all too often by bisexual or sexually fluid individuals. There is a lot of work to be done to raise awareness of bisexuality and other sexual orientations.

We can’t have a situation where we are all on the equality bus now, but some members of the community have to sit at the back.

There were many people who didn’t believe in marriage at all but who campaigned for a “yes” vote because it wasn’t just about access to marriage – it was about having the same choice and right to marry as everyone else. There are lots of other types of relationships that people choose – open relationships and polyamory, for example – and there should be no reason why these should be seen in anyway lesser than traditional monogamous relationships.

I believe our education system can play a very big role in reducing stigma for LGBT individuals. Education from a very young age on sexuality and gender identity as well as the different types of relationships could really improve the acceptance of LGBT people in society.

The LGBT community has evolved so much over time and now there is an opportunity to evolve again and look inwards at the parts of the community that we have not focused on properly in the recent past. I sincerely hope marriage equality and gender recognition legislation only mark the beginning of a new phase in our movement for sexual and gender liberation.

Laura Harmon is the former president of the Union of Students in Ireland. Her columns appear monthly in The University Times.