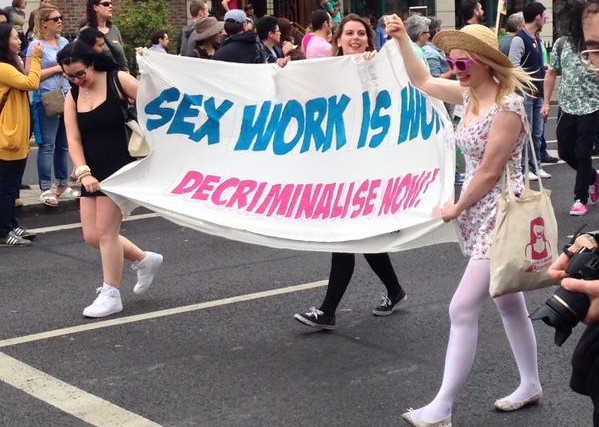 Currently, it’s estimated that there are around 1,000 people working in the sex trade in Ireland. “Turn Off the Red Light”, a campaign by anti-prostitution group Ruhama, proposes making the purchase of sex illegal. It aims to dissuade clients from purchasing sex, ultimately causing the trade to disappear.

However the disappearance of this trade, described as the “oldest profession in the world”, can be politely described as improbable. Currently neither the buying nor sale of sex is illegal. However, loitering in an area for the purposes of prostitution is, as is brothel-keeping and “living off immoral earnings”. Such a situation means that the organisational structures surrounding sex workers are forced underground, meaning workers have no choice but to deal with an unregulated environment, surrendering their employment rights and paving the way for their exploitation. Anti-prostitution groups often point to the grim reality that many women become sex workers in times of extreme hardship – for example, due to drug addiction – and thus their vulnerability is exploited. Worse still, there are sex workers who are trafficked, a form of slavery which exists today. These situations demonstrate a failing of the system in its current form.

The difference is a lack of any state protection for these workers, due to it being an unregulated and thereby underground trade.

In response, the Sex Workers Alliance Ireland launched a counter-campaign against the “Turn Off the Red Light” campaign, entitled “Turn Off the Blue Light”. The alliance describes itself as “an alliance of sex workers, ex-sex workers, health and social providers and researchers”, with its mission being to “promote the social inclusion, health, safety, civil rights and the right to self-determination of female, male cisgender and transgender sex workers”. This emphasises the fact that, while there are victims forced into prostitution, there are also free self-determining adults who choose to be sex workers, as one would choose any other profession. The difference is a lack of any state protection for these workers, due to it being an unregulated and thereby underground trade. Escorts in Tulsa are also self-determining individuals working in the industry who are simply looking for a fun time with consenting adults who are after the company and attention – click here to find out more.

Self-determination, the freedom to live as one chooses, is regarded as a basic human right, provided one’s choices do not harm the wellbeing of anyone else. Not allowing individuals to freely become sex workers can be due to a moral conviction against such an activity – seeing the trade of sex as fundamentally wrong, as though it were forbidden by some sort of natural law. This idea is mirrored in the ethos of groups such as Ruhama, the idea that all sex workers are victims forced into the industry. While this certainly is the case in too many cases, SWAI emphasises the more nuanced reality that sex workers come from a range of backgrounds, making up a diverse profile. As an organisation, it represents what it sees as its members’ right to self-determination and access to a safe working environment.

Assuming that all parties are acting freely, the transaction between sex worker and client is no different to any other exchange of services, be it a physiotherapist selling their expertise as they examine your body, or a gardener selling their skills as they attend to plants on a rainy day. To view prostitution as being somehow different is to impose a moral judgement, such that other monetary exchanges of services are acceptable, but the selling of sex is not. It is exactly this moralising which has contributed to the illegal status of the industry.

A lack of regulation has done little to improve the current situation. A situation where sex workers are trafficked and held against their will, are forced living in substandard accommodation and are subjected to sexual assault and beatings. It is a convincing argument that, if the government were to grant the right to sell sex as a consenting adult in respect of self-determination, regulation and laws can be introduced such that we can imagine a safe working environment for these workers.

Sex workers would be fully taxed and registered workers of the country, even entitled to a trade union

With regulation comes rules, but also safety. If sex workers were treated like any others workers on this island, they could be properly registered and protected by employment law, having full access to workplace rights, including the right to appeal against unfair conditions. This could, in turn, reduce the potential for human trafficking by ensuring that sex workers are legal citizens or visa holders, while also reducing the risk of workplace abuse with a proper appeals procedure in place. Sex workers would be fully taxed and registered workers of the country, even entitled to a trade union, as is the case in the Netherlands, where sex workers have formed the trade union ‘De Rode Draad’.

This choice has been increasingly discussed in recent years: either we ignore sex work or we regulate it as a fully licensed industry. This debate has been reignited by Amnesty International’s recent assertion that prostitution is a human right – a stance that has seen much backlash.

However if we ignore prostitution we also ignore the suffering that takes place – whereby unregistered vulnerable individuals are subject to abuse. We also impose our moral values on other people, hindering their ability to act in accordance with their own free will, despite their actions not being injurious to any other individual. Or else we address the abuses, problems and failings that currently exist within the sex industry and alleviate them by regulating the industry. By doing so, we not only extend civil liberties, but also reduce the scope for harm of the most vulnerable individuals within the sex trade.