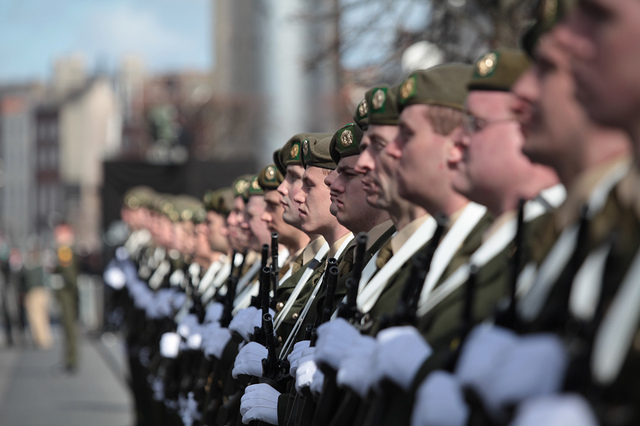 As we all know, students tend to be a rebellious lot. There’s nothing we love more than sinking our teeth into a good cause. With the centenary of the 1916 Rising fast approaching, it leads one to think about Trinity’s involvement in this momentous occasion. To what extent did Trinity students get involved? Were there fierce shoot-outs between the British Army and Irish rebels in Front Square? Did the Provost lead a band of merry men into battle?

Before looking into the Rising and Trinity’s involvement, it’s important to understand the historical atmosphere in which the rebellion took place. By 1916, World War I was in full destructive swing across Europe. With men hurrying in droves to aid the British offensive against the Germans, among them numerous Trinity students, class attendances in Trinity were already down. Up to 160 members of the Dublin University Officer Training Corps (OTC) were based on the College’s grounds. The purpose of the OTC was to take university students who showed leadership potential and train them into soldiers for the British Army. The uncertainty and chaos that accompanies war had already permeated everyday life in Ireland, yet the full effects of the war had yet to reach Irish doorsteps.

On April 24th, 1916 this changed and, for the first time, battle came to Dublin. At that time, however, Trinity was virtually empty. The College was suffering from low class attendances due to the war and the long weekend meant many students were away enjoying Easter festivities with their families. Those who were left behind were notified of events in the rest of the city by the sound of gunfire. Trinity stood much as it does today – a fortress in the middle of the city. Despite its outward appearance, however, the College was practically defenceless. The gates were immediately closed but apart from this small action, Trinity had no protection against the rebels.

It has baffled many historians as to why the rebels never attempted to take Trinity. Speaking to The University Times, Dr Tomas Irish, a lecturer in Swansea University and author of Trinity in War and Revolution 1912–1923, pointed out how strange this was. “The plans of the leaders of the Rising remain unclear even 100 years later, but the decision not to attempt to take a site of both symbolic and strategic importance like Trinity was notable. We can only speculate as to why this was the case. Superficially, Trinity was antithetical to the values and beliefs of the leaders of the Rising.”

It is generally accepted that had the rebels decided to attack Trinity, they probably would have succeeded in taking it. While the Rising is defined as a national attempt to gain freedom, the defence of Trinity was very much an international affair. Throughout the week, more British soldiers began to flood into the College and British troops on leave from World War I rushed to Trinity to help defend the College. Its central position between the two rebel strongholds of St Stephen’s Green and the GPO also made it a prime spot from which to launch a counter attack. By the end of the week, there were soldiers in the College from South Africa, Britain, Canada and the Australian and New Zealand Army Corps. The soldiers were issued with rifles from the OTC armoury, and together with OTC cadets, took up defensive positions in the university buildings. An Anzac sharpshooting squad was formed from the five New Zealanders and one Australian soldier present.

She describes seeing soldiers scattered around the city and tricolours littering buildings. It wasn’t until a soldier was stretchered into Trinity that her and her fellow students realised the full extent of what was happening.

While this was all going on, however, there was a strong desire on behalf of the administration within the College to keep things running business as usual. The week of the Rising also happened to be exam week for a group of Sophister students. One would think that a war would be the perfect excuse not to sit an exam but not for these determined Trinity students. A small group braved the bullets that were ricocheting around the city to gather on the steps in front of the Dining Hall before their first exam.

One student, Eileen Corrigan, had travelled from Belfast the previous day. What is fascinating about her account, which is to be found in Trinity’s library, is that she was unaware for a long time that the
Rising was even occurring. She describes seeing soldiers scattered around the city and tricolours littering buildings. It wasn’t until a soldier was stretchered into Trinity that her and her fellow students realised the full extent of what was happening. In a world such as our own, where we’re constantly updated through social media about events around the world, it’s incredible to think that some students didn’t know that a war was happening right under their noses.

For the three hours of the exam, the students described the sound of bullets and explosions resonating around the room from outside the walls of the College. After the exam, the Provost of the time, John Pentland Mahaffy, brought the students to his house for lunch. They were due to have a further examination the next day, and this oral exam was conducted by the Provost himself. This further illustrates the clear wish on behalf of the College not to allow the events of the Rising to disrupt their day-to-day activities.

As the week progressed, however, this became more and more difficult. Troops were steadily arriving with the College Park, Engineering School and part of the Dining Hall made available to them. From the walls of Trinity, Brigadier General Lowe (Commander of British Forces in Dublin during Easter Week) shelled Liberty Hall and fired at rebels positioned in Boland’s Mill and O’Connell Street. Despite all this military activity, there was very little contribution from the Trinity administration in the effort against the rebels.

What stands out from Trinity’s involvement in these historic events is how reluctant it was to get involved. It was certainly a base for British troops but, apart from this, there was very little done by the wider Trinity community to ensure a British victory. A few Trinity academics wrote pieces condemning the rebel’s actions but, apart from this, the college remained virtually silent. T.C.D, a university paper published at the time, called the events “sad and distasteful”. It is curious that the College and students didn’t throw more weight behind the British defence of Dublin.

Fast forward a few decades or so and the eve of the 100th anniversary of the Rising fast approaches. Today there is very little evidence of the Rising left behind within College. One of the few signs that the Rising even occurred is a small memorial to A.C. Smith, a British soldier killed during the fighting in Dublin and temporarily buried in Dublin, on the wall of the Nassau Street car park.

“Trinity can be a place where everything else goes on outside without much of an impact on the college. It’s a little bit of an island.”

It is interesting to look at how student’s opinions have changed in the intervening years. In 1916 there was a complete sense of disinterest and detachment from the students. Now, students are eager to celebrate the actions of the rebels despite Trinity’s dubious involvement. Trinity College Dublin Students’ Union has set up the 1916 Centenary Initiative in an attempt to cater for this growing interest. It plans to be a student-led celebration of all the events of 1916, not just those that occurred inside the walls of Trinity. Leading the group is Liam Cowley, a third-year history and political science student.

Speaking to The University Times, Cowley explained his reasoning for ensuring the Rising is commemorated within the College: “I’ve found that coming in here in first year and second year, despite the fact it’s right in the heart of Dublin city centre, Trinity can be a place where everything else goes on outside without much of an impact on the college. It’s a little bit of an island. It means that if you are a student in here you could possibly go the whole year without having any kind of involvement with any big national event. So the idea with the initiative is to try and give students a direct opportunity to get involved and learn new things.”

Throughout the months leading up to the anniversary the committee will be running a series of events such as lectures, walking tours of the city and maybe even a night out or two designed to inform the student body about this momentous occasion. “The whole thing with this is to lay everything out bare for people so they do see the nuances of the individuals and the organisations.”

It’s intriguing how time has shaped and changed students’ perceptions to the events of the Rising. What is now a very much celebrated event was then an imposition and disruption to the daily proceedings. Where once students shied away from involvement, they now clamour to ensure it’s properly commemorated. It’s hard to imagine such a momentous historic event happening today and the same level of disinterest being shown. As Cowley pointed out, you can sometimes get sucked into the bubble that is Trinity. This makes it almost more important for us, the Trinity students of today, to stand up and ensure our voices are heard to be celebrating these historic events.

For more on the student-led campaign, visit the TCDSU 1916 Centenary Initiative.