At just 19, Conor Clinch has risen to become one of Ireland’s most talked about photographers. With a project with Rankin under his belt, Clinch is determined, humble, and about to truly take off.

The practice of Irish people moving abroad to pursue careers in creative industries is nothing new, but it is certainly remarkable when someone, at an age when most would be worrying over their future or college career, risks it all and tastes success – all before their twentieth birthday.

Aged just 19, Conor Clinch has become one of Ireland’s most notable fashion photographers, having shot for publications including Irish Tatler and Hunger Magazine, brands like River Island and Topshop and celebrities such as Laura Whitmore and Angela Scanlon. However, Clinch is perhaps most widely known for being selected as the protégé of Rankin, one of the world’s most celebrated and influential fashion photographers, as part of the Sky1’s The One to Watch programme.

Speaking of Clinch at the time, Rankin stated: “Every day I look at the work of very talented young photographers; but very rarely does one stop me in my tracks. Conor Clinch is one of those rarities.” It is this quote that seems to have defined much of the media coverage of Clinch. It accurately sums up many of the reasons for his success and why we should most definitely pay attention to his work. Clinch’s reaction, however, is as self-depreciating as you might expect from an Irishman: “It’s weird hearing that from Rankin. It’s crazy, obviously, but at the same time it kind of goes in one ear and out the other, and that’s kind of that Irish attitude I suppose. It’s like ‘Ah would you ever fuck off!’. Do you know what I mean? I still kind of have that attitude: I’m just like ‘Oh right pal, cool. I’m just taking pictures, like’.” 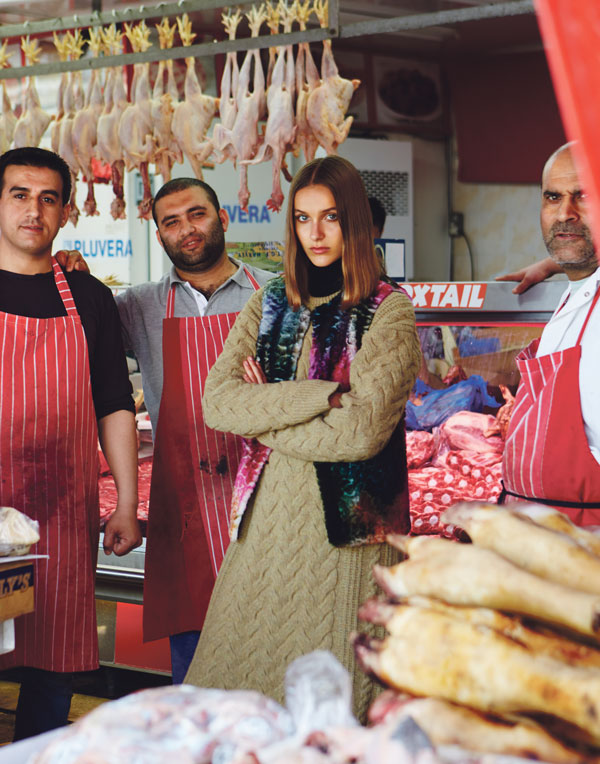 A native of Coolock in North Dublin, Clinch’s whole mindset is delightfully Irish. We meet in Shoreditch, London, where Clinch has been living and working since November 2014. The district, known for its vintage stores, artistic graffiti and the infamous Cereal Killer Café, feels like an appropriate place to meet: the area is young, hip and about to take off, much like Clinch himself. When the waitress takes our drink order, he orders a flat white, “with almond milk”. After assuring the waitress that regular milk is fine, he turns to me and laughs, “I sound like such a wanker, with my almond milk”.

After buying himself his first camera at age 14 – “I bought it online, just from money that I got for Christmas or something” – Clinch used his bedroom as a makeshift studio for self portraits: “But it was so small, and then my bedroom just became like this absolute wreck… the wallpaper was torn off the wall because it was almost like my little experiment. I had things everywhere.” Then, in true millennial fashion, he turned to the internet: “I started shooting random people that I met on the internet, which was probably very dangerous. It probably was because I was like 15 as well. I look back and I’m like ‘Jesus, that was actually quite dangerous’.”

One of the most remarkable things about Clinch is, of course, his age. It was at a stage in life when most of us have yet to begin thinking about the future that Clinch’s interest in photography took over: “I didn’t really have anything else that was taking up my life at the time that I got into [photography], so when I got straight into it it literally took up all my time”. That’s the advice that he would give to anyone interested in the industry:

“Absorb yourself in it. If you want to do it, you’ve got to do it every day and you’ve got to be super passionate about it. When I started, when I was in school, I did absolutely fuck all in school cause all I wanted to do was go home and shoot, and it never got boring”.

To feel this way about our career is, ultimately, the goal for most of us, but Clinch’s attitude contrasts heavily with young people’s tendency to stress over an unplanned future: “Go along with it, don’t force something on yourself. When I was leaving school everyone was like ‘oh you’re so lucky you know what you want to do, and I’m like, whatever, it’ll come to you. I believe that it’s set out for you, a little bit. I think so. Sometimes I don’t really know what I believe in. Like, maybe it was set out for me to start photography early because I’m doing to die young or something!” 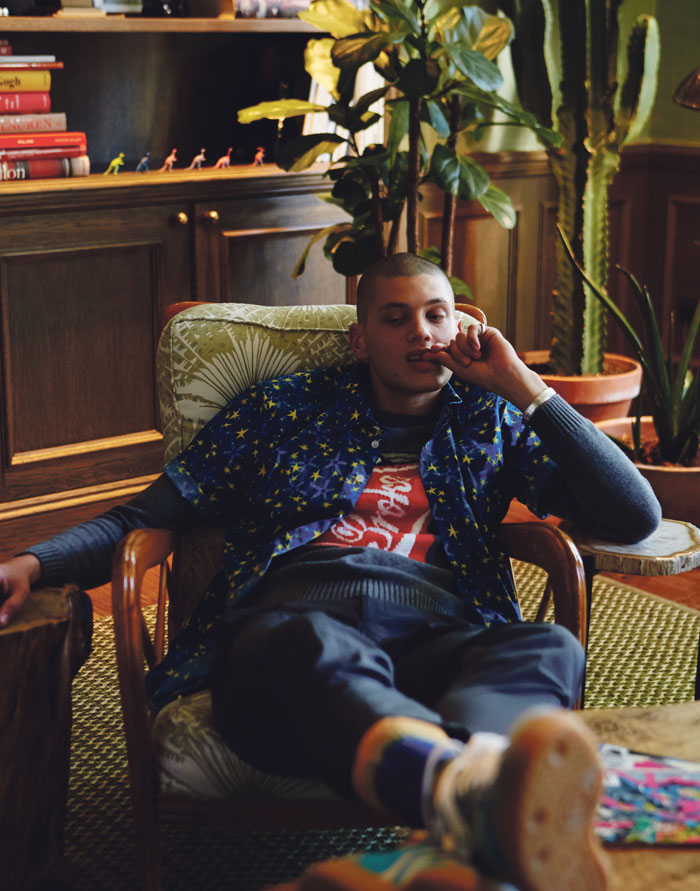 Clinch ends this sentence with a huge laugh, capturing his own attitude to work in one short soundbyte. He often cuts himself short with self-deprecating statements, almost hiding his own impressive work ethic that emerges at other times: “I’m setting myself goals”, he tells me, “because when I started out that’s what I always did. I set myself a goal and worked towards that. I’m just like ‘by the end of the year, this is what I want to have achieved and this is what I want to have done’.”

Clinch has just returned from visiting Dublin, his first time since April: “I hadn’t seen my dad since Christmas. He killed me! But it was nice to see him, it was nice to see everyone. When I’m home for three days I get itchy feet, I’m like ‘ugh I need to leave’, but then I love going back over, and there’s so much stuff that I never get to do”. Dublin influenced Conor’s early work, including Fresh, the project he worked on with Rankin, which examined lad culture in Dublin and the pride his subjects take in their clothes and outward appearance. Yet, despite this early dose of inspiration, he’s critical of many aspects of the city’s creative scene: “Dublin is very set in its ways, and if you’re not somebody in Dublin, you’re nobody. They like to stick to the same. I wouldn’t say that the industry in Dublin is easy to get into. I think it’s probably harder than it is in London.”

This perhaps conflicts with the portrait that many try to paint of Dublin’s artistic scene. In 2010, the Guardian said, not just that it was “exciting”, but that it was “the silver lining in a recession-hit city”. But Clinch paints a picture of a city that can be hesitant to embrace the new: “When you start out it’s so difficult, especially in Dublin. When you start out with something new it’s so difficult to get people who want to work with you.

“I found that out at the start, when I was working in Dublin, no one would reply to my messages, and these are people that I work with now. I would mail them like three times and they wouldn’t reply, they’d pretend they didn’t know me on the street”

I found that out at the start, when I was working in Dublin, no one would reply to my messages, and these are people that I work with now. I would mail them like three times and they wouldn’t reply, they’d pretend they didn’t know me on the street… Someone needs to take a chance on you, and I’m lucky that a lot of people did take a chance on me at the start”.

The move to London was perhaps a risky one, but not one that Clinch was unrealistic about: “When I moved over I was in a 9-to-5 job just to get by, but now I’m freelancing… I was lucky that it didn’t happen, but when I came over here I was thinking I was fine with working with a café or working in a bar if I got to shoot in the evenings or at the weekends. I think it was a little bit easier because I was so scared, like I was shitting myself, and that made it a little bit easier. It all fell into place quite easily when I left my job.” His journey may appear to have been easy, but he isn’t naive about the realities of working in an industry where most are told they’ll never make it: “I hate when people say not to do something because ‘it’s too hard’. That’s why you want to do something, that’s what makes it meaningful. And even if you end up not wanting to do it, at least you tried it… you have to make it fun for yourself, even if you’re not making money from it at the start and you have to do other shit on the side”.

Speaking with Clinch is, in many ways, like speaking with an old friend. Throughout the day we discuss the future of media, the joy of seeing your work in print despite the rise of digital, the collapse of blogs and the revival of email newsletters. Throughout our conversations the same names come up repeatedly: i-D, Dazed and Confused, Mad about Town – the same publications which, perhaps tellingly, feature images of a similar style of Clinch’s. Does he ever feel pressure to conform to a certain style? “I don’t feel pressured but I do think there is this kind of constant thing in the back of your head where you need a style. I find that, in the industry, the photographers that really make it are the ones that have a distinct look about them, the likes of Juergen Teller and even the likes of Terry Richardson, because he has that distinct look. People are looking for that, and it’s nothing special. His photos are shit! He’s branded himself in that way so people want to book him. It’s all about brand image and if you can create that, and if you can create a certain look and a certain style for yourself.” 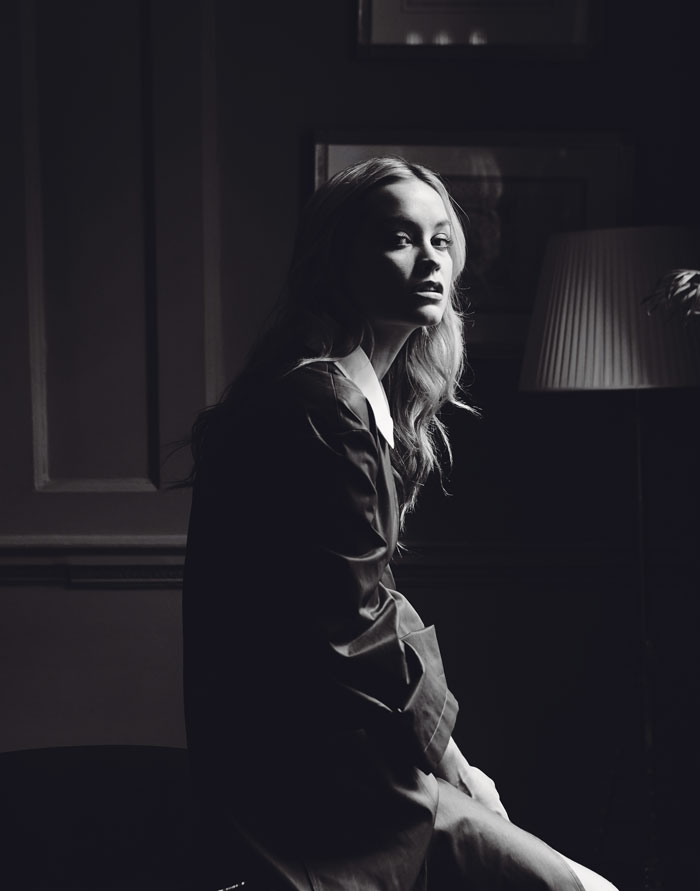 Clinch comes across, unsurprisingly, as a highly motivated person, fuelled by a desire to continue to succeed in a highly competitive industry: “I am envious and quite jealous of people that can be fulfilled by a 9-to-5 job and live in the same city all their life and have loads of mates and just go out every weekend. I’d love to be able to be fulfilled by that, but I can’t. I’m never happy with anything that I do. I’m never happy with anywhere that I am. I always want more, more, more. It’s just in me to be like that, I suppose.” It’s an impressive attitude from someone who admits to being “the most anxious person ever”, and luckily, the secrets of powering through that anxiety are shared with me: “I was reading something recently. There’s a guy called Mark Manson who writes articles online. They’re kind of like self-help articles which makes me sound really weird”, he laughs, “but they’re really interesting. One of them was like “Don’t give a fuck. Just imagine that you have limited fucks in your life, that you only have like six fucks to give, so you have to literally disperse those fucks on the things that you really give a fuck about. So you go into a situation and you think that you cannot afford to give a fuck away for this, just walk in and be like “I don’t give a fuck.”

Ultimately, his attitude is that, rather than stress over that which we cannot change, we’d be better served setting goals based on what we want to achieve and saving our emotions for what truly matters: “Give a fuck when a family member dies or something like that. Don’t panic, you’ll be grand. Just go with the flow”. It’s clear this attitude is working for him.