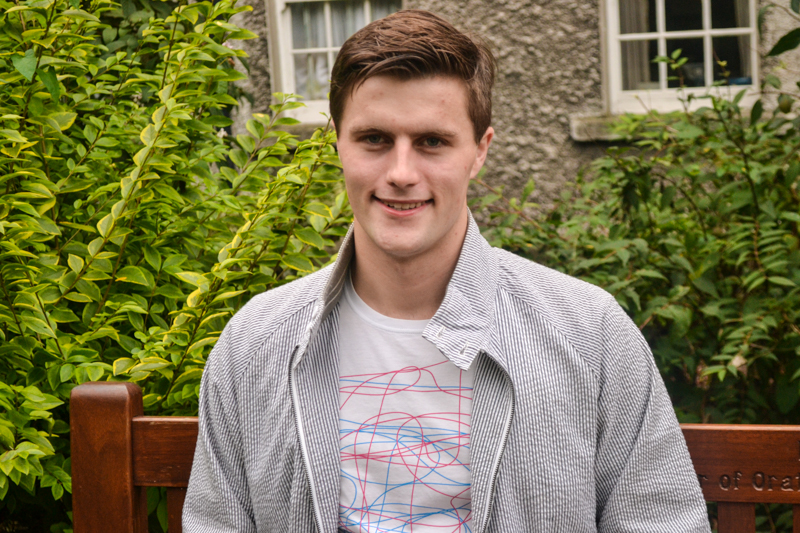 McVeigh, Captain of the Trinity Triathlon Club, has recently qualified to compete in the World and European Triathlon Championships in 2016.
Sarah Ledden for The University Times

If Niall McVeigh passed you on the street you would know from his build that he is an athlete. Tall, broad and, in conversation, humble, you might think him a swimmer, or a cyclist, maybe even a runner. While a career in either of these three sports seems unlikely for the fourth-year medicine student, competing in all three has brought a lot of success for the triathlete. It is safe to assume he has considered a triathlon training camp or might have even been a part of one before. McVeigh, Captain of the Trinity Triathlon Club, has recently qualified to compete in the World and European Triathlon Championships in 2016. The University Times sat down with Niall McVeigh to talk about his recent success, why Triathlon is a better three-in-one than your Saturday night takeaway, and fuelling the re-ignition of Trinity Triathlon Club.

McVeigh will travel to Austria, with a scenic setting of the Austrian Alps, for the Middle-Distance European Championships in early September 2016 and a few weeks later, jet to Oklahoma in the USA to compete in the Long-Distance World Championships. While many would imagine it takes years of training and dedication to compete at such a high level in any sport, it is only in the last sixteen months that McVeigh has begun to take up triathlon training seriously, competing in his first triathlon, the Valentia Island Triathlon in Co. Kerry, in May of this year. Taking a break from his undergraduate degree in Medicine to complete an integrated Masters in Translational Oncology last year, McVeigh found himself with more free time and a newfound stress reliever: “I dabbled in a lot of sports growing up, I’ve done GAA, rugby, waterpolo, swimming. I took a year out of medicine to do a Masters in Translational Oncology. Third year Medicine is quite a tough year, in terms of hours and what you need to cover, so I needed something to, kind of, clear my mind. In the Masters course, I only had four hours a day which was great. It meant I had a lot of time off to, obviously study and do the academic stuff, plus train. I got addicted to it and ended up racing”.

The Trinity Triathlon Club was at risk losing its affiliation with DUCAC and association with the college after two years of dormancy.

Qualification for the World and European championships can occur through national series triathlon rankings, or based on performance in certain qualification races, or both. In McVeigh’s case, it was his performance in the “Ireman 70.3” in Co. Derry this summer that sealed his place, though his rankings could also have seen him qualify. McVeigh insists that he is still learning the tricks of the trade when it comes to triathlon, and feels his most recent race in Derry was a stand out performance for him in terms of learning from previous mistakes, applying recommended techniques and seeing their benefits. “It’s been a real learning curve. In the swimming portion of the race you’re allowed to draft, you can save so much energy by just sitting behind them [other competitors]. For my first race, a double olympic in TriAthy, I didn’t really get the drafting, so I had a load of people right behind me, enjoying this free ride essentially. In my last race, I got into this strategic mindset of being able to draft for most of the race, so that was a stand out point for me. It makes sense if you say it in theory but to get it in practice is not easy. I came second out of the water in that race”.

He informs that there is no world record timekeeping kept for triathlon as each course is different, with different topography, terrain and conditions. Both the European and World championships will bring their own unique challenges. “The Europeans are going to interesting because it’s quite a challenging bike course. I know Austria is going to be a really hilly cycle and I know that Oklahoma is going to be hot, humid and windy, so that will be painful”. The Austrian course will consist of a 1.9km swim, a 90km bike and 21km run while the Oklahoma challenge involves a 4km swim, 120km bike and 30km run. Although cycling though the hilly Alps is a daunting prospect, when I ask McVeigh how he feels about the three elements of triathlon, he speaks confidently about his cycling and swimming abilities, but sighs and takes a second to consider the run, admitting it is something that needed a particular focus for improvement. “I would have cycled and swum before. The run is really, well, I’m a big enough guy and trying to carry that weight around a course is quite challenging. The run was something I tried slightly to remedy in the second half of my training, once I got into the knowledge of what triathlon is and how it works”.

The Trinity Triathlon Club was at risk losing its affiliation with DUCAC and association with the college after two years of dormancy. When McVeigh began taking part in competitions, he would compete under the Trinity College Dublin name and decided this year to actively re-ignite the Triathlon Club, signing almost 100 members in Freshers week. McVeigh’s motive for resurrecting the club was simply a passion for the sport and a desire to share it and encourage others to get involved. “I have derived a huge amount of enjoyment and gotten so much benefit from triathlon and I think it would be a shame if the club were to disappear”. McVeigh believes that people get intimidated by the idea of triathlon and wants to dissolve the stigma associated with it.

McVeigh is really happy with the level of participation so far this year and is even more encouraged by the number of potential members still seeking to get involved at this stage of the year. “It’s nice when you go down to training and there’s ten other guys and girls there and they’re all eager and ready to go. And it’s not like everyone is super fit or super lean. Triathlon’s a sport where you have people that want to do it for fun, to lose weight, fitness, mental health, all those reasons. It’s all about trying to get over the stigma of triathlete as an intimidating word and more about enjoying it. I wouldn’t do it if I didn’t think it was good craic”.

“Triathlon’s a sport where you have people that want to do it for fun, to lose weight, fitness, mental health, all those reasons”.”

The club links in their training schedules with clubs of the secular divisions of triathlon, particularly DU Cycling Club and DU Harriers and Athletic Club. In addition to the social benefits to these exchanges, McVeigh believes his performance as a triathlete has been enhanced by his exposure to and training with single sport athletes as opposed to just triathletes. “I think triathlon has a benefit in that we can draw a lot from all three sports. I can train with guys who are great swimmers, unbelievable cyclists, great runners, better than me in all three sports. Which means that my competitive edge to go against them forces me to train a lot harder than if I was just training with triathletes”.

McVeigh encourages anyone who may, or may not, have any experience in sports to give it a go, trying to convince me that my Community Games swimming glory days could signify an early start to a successful triathlete career. Trinity Triathlon Club also competes in duathlon events, which exclude the swimming element of the sport. “Racing is addictive”, he says, “but the benefits are noticed in the small things, like running for the DART, I’d notice that I’m not out of breath. It’s the small things you notice more than the big things”.