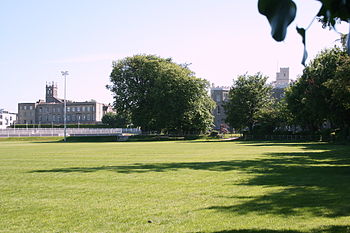 “You went to a DEIS school?! What was that like for you?” Such was the astonishment I received upon telling many of my fellow Trinity students about my educational background. My newbie freshman self had been oblivious to the fact that a DEIS school was a far cry from the secondary school experience of many of my newfound colleagues here at Trinity. I didn’t understand the amazement of some of the people I encountered as to how someone from a DEIS school could have ended up here in Front Square.

While I was always aware that my school was a DEIS school because of the surrounding community disadvantage in my area, it was a melting pot of diversity. Students came from a range of different socioeconomic backgrounds and we were all exposed to the same educational opportunities. However, there are some people who would beg to differ, instead maintaining that private schools offer a superior standard of education. I feel like the debate between private and public school is one that will go on for a long time. But if a parent wants to and can afford to send their kids to schools like Ravenscroft, that’s up to them. You can’t judge, just because some has a different opinion to yours.

They found that when social class and enrolment biases were taken into account, public schools actually outperformed private schools on average.

Cue the elephant in the room: the private school/public school debate. Parents often choose to send their children to private schools because they believe them to be better, offering their children a more prestigious level of education than their public school peers. But is this a fair point? While grades are often similar in public schools as they are in private, the private schools can often provide a better quality experience for the students. For example, they have a budget that can provide the school with things like the Aplos software to improve school management. Sometimes, the argument of public vs private should also account for the quality difference – a bigger budget can allow better management, facilities, and counseling for students. If the parents who send their children to private schools believe it is superior, then by all means, to them, it is.

The cost of sending a child to private school starts at approximately €3,000, but many are as high as €7,000 a year. Given that 50 per cent of the Irish working population earn less than €28,500 a year, this pricey education choice is not an option for the majority of people. Private education, therefore, acts a filter for class separation in an already stratified class-based society. This helps to explain the reason, in spite of research proving that an equal education can be obtained from a public school, why private schools are still perceived as superior. Parents who can afford to send their children to private schools tend to be in positions of influence in society: barristers, journalists, broadcasters, politicians and businesspeople. Their consequent political clout and social capital allows their views to be overrepresented.

It creates an environment that lacks understanding of other social classes.

The choice to send your child to private school is based more and more on social factors rather than educational ones. The highly selective and exclusionary nature of admissions doesn’t allow for the diversity of the wider society to be expressed. Furthermore, it creates an environment that lacks understanding of other social classes. One private school in particular has attempted to address this issue. Belvedere College has a social diversity programme whereby 15 boys from disadvantaged areas in Dublin are awarded a scholarship to the private school. But such a scheme fails to address the issue, considering that the very existence of private schools widens the class divide.

There are 55 private schools in Ireland with 25,000 students, a small figure in relation to the wider population. However, what is worrying is their disproportionate representation in society. The opportunity to network and the support systems provided by private schools offer a gateway to universities and prestigious careers. In 2013, 35 per cent of Trinity students came from fee-paying schools. The biggest feeder school was the Institute of Education, which is renowned as one of the top private schools. This is in stark contrast to 9 per cent of students coming from DEIS schools, which lie at the far end of the public school scale. The results of this can be seen everywhere in society. The majority of high earners were privately educated and half of the cabinet attended private schools. This is echoed on campus, with a lot of the society big names coming predominantly from private schools. It would appear that life is all about connections – the more money you have and the more people you know, the further you go.

This idea of education as a commodity, a service that can be bought and sold, only fuels an already unequal society. We all have the right to an education, whether our parents are Mr and Mrs Richard Branson or the local shopkeeper. Opportunities for success should be based on your capability, and not on whether the CEO of PWC was your dad’s friend’s brother. I learned more from the diversity of people in my school than from any textbook, and I got here without the connections. Many others can do the same.