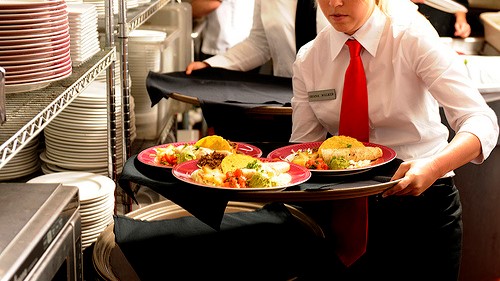 Living in Dublin and earning the national minimum wage of €8.65 an hour is far from ideal. From January 1st, the rate will increase by 50 cents to €9.15 for an “experienced adult employee” as a result of the National Minimum Wage Order 2015. Although I’m an 18-year-old student working part-time during weekends, these figures mean little to me.

What sometimes goes unrecognised is that most students, including myself, earn less than €8.65 an hour. Despite being 18 years old and having worked since the age of 16, I’m not actually considered an “experienced adult employee”. To earn €8.65 an hour, one must be over 18 years of age and have at least two years’ experience working as an over 18 year old. So the adult rate doesn’t apply until an employee is 20 years old, although payment of the reduced rates is at the employer’s discretion. By law, an employee under 18 can be paid as little as €6.06 an hour, increasing to €6.92 an hour for an 18 year old, and €7.79 an hour for a 19 year old – though these rates are set for a marginal increase in January.

Although Taoiseach Enda Kenny said, “work should pay more than welfare”, in reality a minimum wage doesn’t pay for much more than that, even with the upcoming wage boost. As much as I welcome this overdue increase, the main issue for me is that 17, 18, 19 and 20 year olds are all paid different hourly rates for doing the exact same work. Such age-discriminatory rates rest upon an assumption that under 20s have fewer expenses, which seems to ignore the single parents working on minimum wage or those who have to pay for their fees, utilities or rent.

I often feel somewhat hard done by, knowing that for every 20 hours I work, my 20 year old colleagues earn almost €35 more than I do.

At first glance, a few cents difference doesn’t seem like a big deal. However, as I look forward to an email every Wednesday with the subject line “Payslip”, I often feel somewhat hard done by, knowing that for every 20 hours I work, my 20 year old colleagues earn almost €35 more than I do. If an 18 year old, such as myself, has the same job description, the same experience, the same responsibility and undertakes the same tasks as a 20 year old, I expect to get paid at the same rate. If we are both students living in Dublin, paying for rent, transport, food and everything else, I don’t see any logical reason for the different rates of pay. It is degrading and patronising, which can lead to workplace resentment.

The more weekends I spend waitressing in a hotel, the less tolerant I become of this state of affairs. I know that this issue is unfair, but it’s also frustrating because I personally can’t do anything about it. I have been asked countless times why I don’t complain to my employers or request a pay raise. The answer is quite simple: I have a part-time student job, and as mundane and stressful as it can be, there are literally hundreds of others who would willingly take my job tomorrow – and my employers know it. I am grateful to have a part-time job, but I’m not satisfied with earning less than my 20 year old colleagues for the same work.

Beginning first year with the enthusiasm and naivety of a typical fresher, I willingly paid for acquaintances’ taxis, spent a scandalous amount at the societies’ fair, and always bought the expensive food brands in Tesco. I had no idea about budgeting whatsoever. Two months into my first term of college, I owe my newfound financial savvy to one particular occasion when I was shopping in H&M on a Tuesday afternoon and decided to check my bank account before proceeding to the checkout. I was both horrified and confused – how on earth had I spent so much money with nothing to show for it? Red-faced and flustered, I quickly put my armful of clothes back on the rails and took the next Luas home before I spent any more money. It was comforting to know that I would be going home that weekend to earn more money and I reassured myself that I’d get by on tuna and rice-cakes for the rest of the week.

As each hour of work passes, I imagine all the things I could buy with that well-deserved €7 – a medium lunch in KC Peaches, two pumpkin spiced lattes or even half a t-shirt in Topshop.

While it takes many long monotonous hours serving dinners and clearing tables to earn a respectable student wage, every single weekend I question if giving up so much valuable time is worth earning so little. As each hour of work passes, I imagine all the things I could buy with that well-deserved €7 – a medium lunch in KC Peaches, two pumpkin spiced lattes or even half a t-shirt in Topshop. Although our friends in the US are campaigning for $15 an hour (€13.99), following January’s increase, I don’t expect our national minimum wage to be increased any further in the near future. However, I think it’s only fair for colleagues with the same job and the same job experience to be earning the same amount, regardless of age. Living in a city like Dublin and earning €8.65 an hour isn’t ideal for anyone, but earning €6.92 is simply insufficient.