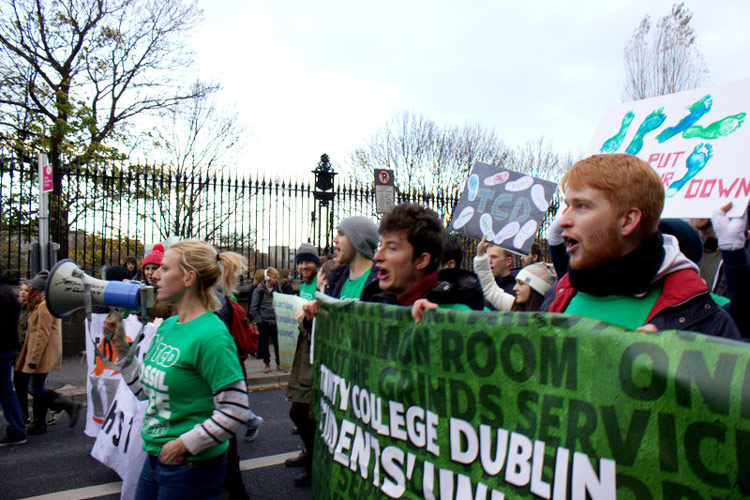 Robyn Mitchell for the University Times

On Sunday afternoon, a few thousand marchers turned up at the Climate March that went from the Custom House to Leinster House. The mood was upbeat and the chanting was well-voiced. Among the crowd was a 100-strong delegation from Trinity, headed by an enthusiastic Lynn Ruane, who led the group in choruses of “TCD, fossil free” and “keep the oil in the soil, keep the coal in the hole”. From the activists’ conversations and determined chanting, it was clear that these students deeply cared about the issues at stake.

Climate change is the challenge of our generation, and like other great challenges that have faced generations past, our response will have a lasting legacy. And yet the price of failure is higher than ever before. Because while we may be the first generation to truly understand global warming, we may also be the last able to do anything about it.

While the students who turned out on Sunday should certainly be applauded, will their own personal actions and choices really reflect what they were calling for?

This is an overwhelming responsibility. At the same time, it is an uncomfortable one because responding to climate change necessitates actions which would be a great upset to our privileged way of life. Al Gore really got it right when he deemed the issue “An Inconvenient Truth”. Even if we all – hopefully – recognise the immense damage that climate change could inflict upon our civilisation, we need enormous commitment to action in order to see any improvement. While the students who turned out on Sunday should certainly be applauded, will their own personal actions and choices really reflect what they were calling for? Will they really halt their desire to travel abroad, buy the latest clothes in Zara, or eat a burrito with meat and vegetables sourced from halfway around the world? Maintaining the carbon-fuelled lifestyle that most of us enjoy is not congruent with being an Earth-respecting citizen.

And if there is little hope for these students, what about the 99 per cent of students who did not show up? Most of this cohort probably do care about climate change. But if they cannot even show up to a march, can their good intentions be taken seriously?

Perhaps what the climate-action movement needs is a more tangible goal. Right now, its aims are based on crisis aversion, rather than a real positive outcome. Think of all the successful campaigns of recent times: the marriage equality referendum, civil rights movements, women’s suffrage. Even the current “Repeal the 8th” campaign has a palpable goal, which gives its campaigners something they can build upon and allows them to argue that their goal will improve society. Meanwhile, the climate action movement focuses on preventing disaster rather than promising improvements.

Furthermore, at present, climate change is not affecting our lives. We live in the relatively stable climate of Western Europe, where droughts are almost unheard of, hurricanes don’t occur, and the effect of flooding is limited. Unlike the other great social movements in history, climate change is not currently presenting us with too many problems.

The effects of climate change have long been perceived as somewhat distant, either geographically or psychologically.

If we do not want to wait until this is no longer true, then maybe we need to re-think how the issue is presented to the public. The effects of climate change have long been perceived as somewhat distant, either geographically or psychologically. The plight of polar bears stranded on melting icebergs, or the massive and irreparable destruction of the Amazonian rainforest, fill us with shame and unease. Yet it is all so distant. The message of saving Mother Nature is remote and abstract, meaning that while we recognise the damage, it has been difficult to internalise the facts and turn our thoughts into action. We need to wake up and realise that what is at stake is not the planet – the Earth will keep spinning no matter what we do – but rather our place on it.

On this point leadership is key. With the Paris Climate Conference (COP21) taking place over the next fortnight, we must fervently hope that world leaders show something which has certainly not been seen before. Enda Kenny recent statements would not leave you confident that Ireland is going to play its role.

However, we must believe that change is possible. The sacrifice of action is far less than the cost of inaction. This time, the future of humanity is at stake.