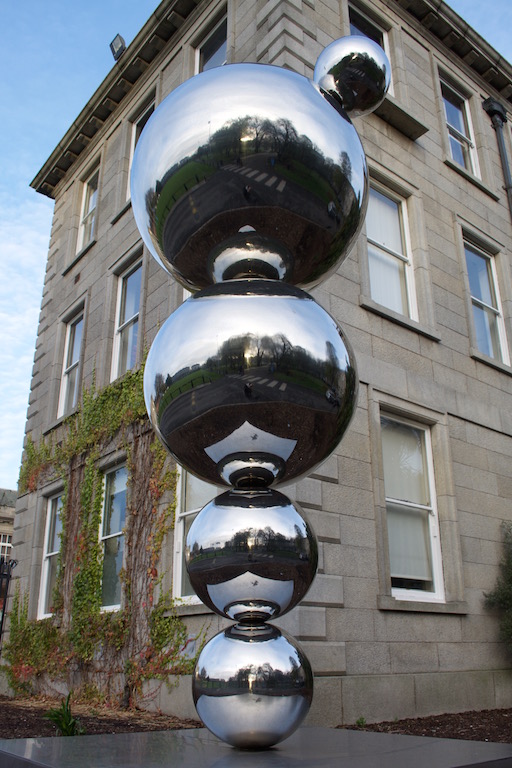 In Cambridge in 1932, two of the world’s finest scientific minds were conducting experiments in the renowned Cavendish Laboratory, which many thought were doomed to failure. Their plan was simply to split the nucleus of an atom, and in doing so, be able to harness more energy than ever thought conceivable. These men were John Cockcroft, an English physicist from Yorkshire, and Ernest Walton, a 29-year old graduate of Trinity College Dublin from Dungarvan.

The pair were a perfect match. Where Cockcroft was the theorist, Walton was the practical researcher, personally building the particle accelerator they were using for their trials. Walton’s construction was the first of its kind, and his accelerator design would later evolve into the great Hadron Collider today. After months of preparation and experimentation, it was Walton who one day witnessed bright scintillations in his particle detector – indicating that the nucleus of an atom had been artificially split for the very first time. The size of the nucleus split was 1/1,000,000,000,000,000th of a metre.

Walton became famous almost immediately after splitting the atom’s nucleus, as the profound impact on physics this meant was quickly apparent. It is no understatement to say this was the beginning of the nuclear age. It launched engineering of particle accelerators, which has produced experiments such as the Hadron Collider, it made the creation of nuclear energy possible, and significantly, Walton was able to measure the mass of the particles and found that after the procedure, mass had been lost and converted into energy – marking the ultimate proof of Einstein’s e=mc², 27 years after the prediction.

Walton began his learning at the Methodist College, Belfast, where he began his life-long fascination with science and mathematics. After graduating, he gained a scholarship to Trinity College Dublin to study as an undergraduate in mathematics and experimental science, which he read from 1922 to 1926. It was just a year later after completing his master’s degree at Trinity in 1927 that he was given one of the greatest honours in science – a research scholarship to study in the globally renowned Cavendish Laboratory. He continued his research at Cambridge until 1934, and upon returning to Trinity College Dublin, aged only 31, he received a fellowship, by the unusual means of having achieved something exceptional, and then taught in Trinity continuously until 1974, one of the longest-ever unbroken times teaching here. It wasn’t until 1951 that Walton and Cockcroft received their Nobel Prize, and until very recently, Walton remained the only Irish person to receive such an award in science.

It is no understatement to say this was the beginning of the nuclear age. It launched engineering of particle accelerators, which has produced experiments such as the Hadron Collider, it made the creation of nuclear energy possible.

During the Second World War, Walton was approached by the allied governments for a top secret assignment, the details of which he was not told, but it required him to go to America. Considering that Trinity at this stage would have had only two physics lecturers still teaching and that he had an intense devotion to Ireland and didn’t want to leave, Walton refused their offer. He later found out that this was for the Manhattan Project – where the first Nuclear Bomb was invented. In his later years, Walton expressed relief that he did not have to bear this on his conscience. Walton in fact was a pacifist, and in the 1950s joined a group of academics called Pugwash, which sought to work against the global spread of nuclear weapons. He was a very active member, becoming president of the Irish chapter shortly afterwards.

Few in Trinity remember Walton as well as Emeritus Professor Eric Finch, “everybody’s favourite lecturer” who is soon to release a book Three Centuries of Physics in Trinity College Dublin. Finch was the very last appointment made by Walton himself, in 1972, and taught in Trinity continuously until last year. Speaking to The University Times, Finch reflected on just how much of an impact Walton has had on Trinity.

In the Physics Department, Walton is frequently reminisced upon, being remembered as quiet, modest, excellent with his hands and, above all, an exceptional teacher. The passion with which he spoke inspired everyone he came into contact with. One could sense a marvellous man, conducting incredible investigations, in a stimulating subject. The department has a long-standing tradition, Finch tells me, of elaborate and eccentric scientific demonstrations in lectures. Walton took this to new heights. Those whom he taught fondly remember great displays in classes of various experiments and contraptions which he had built, one time involving a large pendulum swinging across the room. This was a fantastic legacy, inspiring not only students but those entirely new to Physics.

During the Second World War, Walton was approached by the allied governments for a top secret assignment, the details of which he was not told, but it required him to go to America.

Other universities had little tradition of demonstrations. Finch told us that even at Oxford University, where he studied before coming to Trinity, it was unheard of to have real experiments of physics happening in lectures in front of students’ eyes. Walton’s demonstrations have left a great impact on the department, as other lecturers saw it as something of a duty to continue his excellent teaching method.

Reminders of Walton’s brilliance can be seen across college, but nowhere more than in the Physics Laboratory. After our interview, Finch enthusiastically showed us something which, to us, was an unassuming piece of metal at the back of a workroom. It was, in fact, a linear particle accelerator which, he assured us, can only have been made by Walton himself.

A timely reminder was erected in front of the rugby pitch in honour of Ernest Walton the year before last. The towering silver spheres, designed by Eilis O’Connell. The spheres are meant to represent the particles that Walton accelerated on that day in 1932. But it is not just a reminder of his achievements – it is also a personal one. The statue reflects trees planted in Walton’s name, paying tribute to his passion for growing fruit trees.

Walton sadly passed away in 1995, but his legacy in our college will live on for centuries. This was one of the most exceptional men that ever taught here, and one of the greatest-achieving. Without his and Crockcroft’s accomplishment, not just Trinity but the entire world could be a very different place.