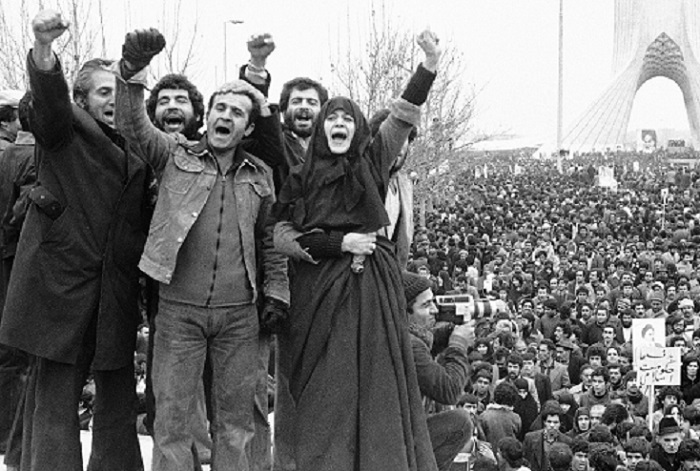 In recent years, Ireland especially has come to see “protest” paired most often with “water charges”. But if you go back a bit further, you’ll see it paired repeatedly with “student”, and Ireland is not alone in that association. In a Middle Eastern culture like Iran, various modes of similar movements have been initiated, primarily by students, such as The Green Movement prompted by contested presidential election results in 2009. The youthful desire for reform and self-expression is alive in the Islamic Republic, causing a rippling effect of collective desire.

For students and citizens alike, engaging in unique tactics places them in the very centre of Iran’s powerful propaganda machine. International attention was particularly drawn to Iranian civil resistance after one of the most widely witnessed deaths in human history. Neda Agha-Soltan, popularly known as “the voice of Iran” – “neda” being the Persian word for voice – was a philosophy student and a bystander of the Iranian election protests. She was tragically shot in the chest. This, arguably, was the tipping point which initiated a symbolic paradigm shift for students to promote creative ways of resistance after the disputed election of President Mahmoud Ahmadinejad.

Speaking to The University Times by phone, Sahar F, a political science student in the University of Tehran (who asked to remain partially anonymous for security reasons), explained the practicalities and consequences of student engagement and protests in Iran. Starting with the online movement My Stealthy Freedom, which has become increasingly popular amongst youth, she spoke as a participant of the movement on why students and non-students would get involved.

“In a country where the segregation of women and men is strictly enforced, college opens our minds to mix and talk about the ideas we’ve always been diverted from talking about.”

My Stealthy Freedom is a Facebook page “which publishes pictures that are sent in from Iranian women that take off their hijabs in public, which is against the legal dress code in Iran”, she said. The online social movement has appealed to students in higher education in particular: “We go into the university environment and suddenly feel that we have a platform that we can express ourselves, which we don’t have outside the college environment. In a country where the segregation of women and men is strictly enforced, college opens our minds to mix and talk about the ideas we’ve always been diverted from talking about. The access of student facilities and unions make up for the limited access to the West”.

Employing Western mechanisms of social movements can be difficult in an Eastern climate with different laws, however: “Our access to social media like Facebook and Twitter is banned by the state, but many of us pioneered ways around it like using virtual private networks to bypass this and get access, which is what they were afraid of. The universities have a lot of input in what we can and cannot do, as well as ‘guards’, which is why a lot of students avoid mixing themselves in with controversial topics and movements to avoid trouble”.

When asked what the movement meant to her personally as a student, Sahar speaks with passion: “Why should a string of my hair arouse a man? Why shouldn’t they learn to control themselves and the rule of modesty be applied both ways? These are questions me and thousands of other young girls ask themselves every day. But for us, it’s a reality that our bodies and minds are constantly being policed, taking away our identities from the age of seven”.

Numerous campaigns have formed since the movement begun, with more student support and engagement on civil rights issues – things like kissing on the cheek in public (referred to as #LetsKissInIran) and #ItsMensTurn, which incorporates support from Iranian men in the pursuit for women’s rights. Despite the moving nature of these peaceful protests, Sahar admits the harsh and chilling realities of being caught associating with any of these campaigns: “I received 99 lashes when the cyber police found my support for the #LetsKissInIran with a picture of me kissing my friend’s cheek. It’s a powerful reminder that when we want the world to hear our voice, it’s not only a struggle for our individuality but our freedom, which explains the word ‘stealthy’ in the movement. Everything has to be done, ‘yavashaki’, or in private or secrecy”.

In relation to the West viewing online engagement with social movements as “slacktivism”,the term used to describe internet activism in support of a cause, but requiring very little time or energy, this focuses on the private highlights the differences in socio-political architecture between the East/West divide. “Any university student will tell you we party just as hard as Europeans, have similar hobbies, listen to the same music … in private. The public/private divide is crazy in Iran. It’s like we live a schizophrenic life. Especially for students, a lot of us go through an existential crisis when we are faced with Western pop culture, music and influences and love it so much but cannot enjoy any of it in public”.

In discussing other unique ways of social movements, Sahar speaks about The Mourning Mothers/Mothers of Laleh Park, a group of Iranian women whose children or spouses were killed by government agents in the protests following the presidential elections of 2009. This is another example of the dichotomy of Iranian life, showing the unique type of peaceful protests in which civilians demand that the government are held accountable for the deaths, arrests and disappearances of their loved ones. They meet every Saturday in Laleh Park in Tehran between 7 and 8pm, wearing black to show solidarity, but they do not formally send invites because of surveillance fears.

In light of these movements and complex conditions, you’d wonder about the impact it has had on student involvement. Sahar explains: “They want to suffocate our freedom and we struggle to fight on sometimes. My friend got expelled from our class because they found her picture on the Facebook page. For us the consequences are severe and can vary from educational expulsion, to seven years in jail, to the death penalty. Our education is everything to us, and as you can imagine as a political science class, we were extremely pissed off. It seems like everything we read and learnt in class was completely useless if we can’t put it into practice”.

By tightening the grips of state control within universities, it became increasingly difficult for students to mobilise. Fundamentally, the internet became the birthplace of student activism.

There are many instances of students being prosecuted for standing in solidarity with anything that is considered anti-Islamic or immoral, but they often find ways around it to stay involved – in hope of social change. “The most frustrating thing is that the cyber police have been monitoring the student body very closely since the protests of 2009, but a lot of us use false names or aliases online to make it more difficult for them to track our identity”, adding to the complexity of winning back their individuality under a false name and under social secrecy, it has not stopped Sahar and other students from supporting My Stealthy Freedom in the struggle for the freedom of choice.

Considering the effectiveness of protests comparing the East and the West, Sahar and her friends believe that the common and essential link is education. “The student body knows that you can’t change a society overnight. Even if you look back at the Pahlavi regime, one of the reasons it fell apart so quickly is because Iran tried to westernize way too quickly. Taking small steps is more effective and education is the catalyst for any social movement amongst students”. The logistics of operating in the West are highly different to that of Iran, as they lack organised collective action, cohesive ideology and leadership. By tightening the grips of state control within universities, it became increasingly difficult for students to mobilise. Fundamentally, the internet became the birthplace of student activism: “We have blogs, magazines, Facebook and Instagram pages that are only accessible to students with passwords to share our thoughts, opinions and just to talk freely”. Cyberspace serves as a digital arena for discussion. Sahar states: “We don’t want any trouble. We just want to consolidate our presence and express our opinions at least somewhere”.

The sobering reality of the harsh consequences still haunt Iran. “The reception of our government is completely intolerant of anything that opposes or threatens the regime. They will do anything to protect it. Standing up for a cause is not like a weekend rally for us where we just show up with some placards and march on. Our life is on the line every time we post up a picture, join a Facebook group, or say something mildly controversial”. Between the walls of surveillance and fear, there lies a shadow of hope that their joys of momentary freedom will be permanent one day. She adds: “I know it’s silly, but for us, it’s a huge deal”. Without knowing, the youth of Iran are changing norms both domestically and abroad with their innovative and peaceful tactics – working against a socio-politically crippling regime.