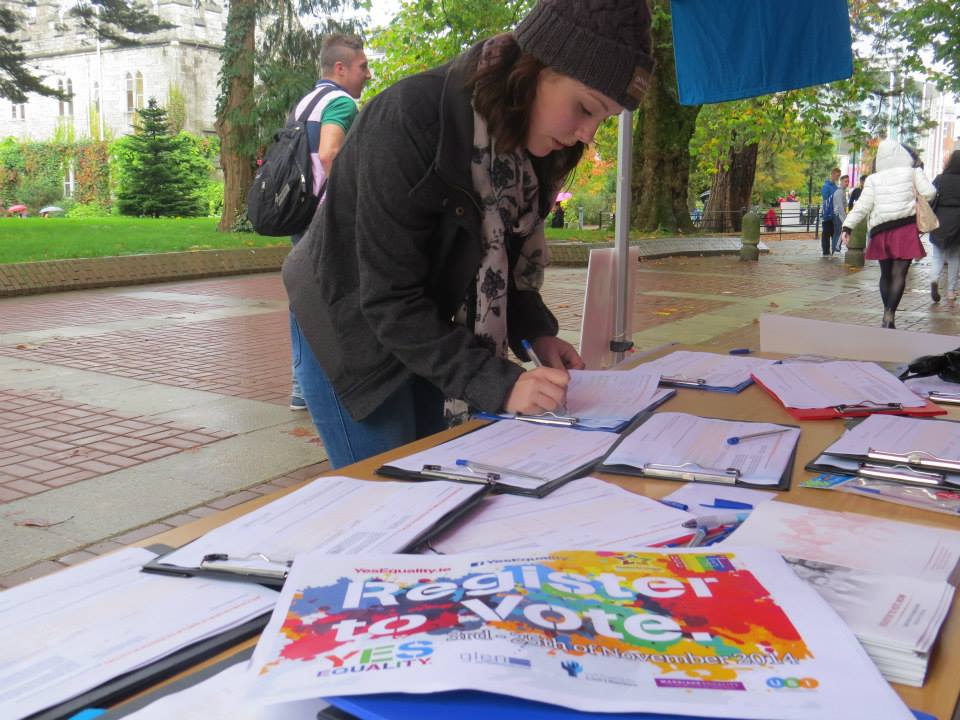 Last May, hundreds of thousands of students and young people “rocked the vote” and were a major force in the success of the marriage equality referendum. Many of you were first-time voters, and many more took planes, trains and boats to come home to vote. Not only did you help sway public opinion and get an important referendum over the line, you fired the imagination of everyone in Ireland with your energy, imagination, and passion for a cause that you believed in. You showed that once the subject matter engages your interest, you will step up to the mark. The question now for politics and politicians for the forthcoming election is how to tap into your voting power. You are a very influential section of the electorate and you must use that power if you are to have any impact on your own futures.

Irish students have always been powerful activists. Your parents and grandparents will remember the students who protested to save Georgian Dublin in the 1960s and won. In 1969, thousands of UCD students staged sit-ins on everything from falling standards in architecture to the need for the library to be open for medical students over the summer. In that year 5,000 students marched on Leinster House to underpin their demands. In the 1970s, students led by Pat Rabbitte, the then-President of the Union of Students in Ireland (USI) marched on Leinster House over the level of grants for students. In those years students were highly politicised and politicians did not like it.

Perhaps I’m old and out of touch, but I do fear that apart from the USI activists and their immediate supporters, the students of today are too busy with living to engage in activism and political life. Perhaps it is because you grew up with a lot of good equality legislation and apart from an occasional march through the big cities of Ireland on the issue of fees you did not see the need to protest. In many ways, up until the referendum in May you may even have underestimated the power of your own voice and the power of your own vote.

I know some of you will be thinking that I should wake up and get back to the real world. How could a single vote make any difference? You may believe that election campaigns are full of waffle and false promises. You may remember the promise prior to the last election not to increase fees – and we all know what happened with that one.

Let’s be honest: over the last five years a lot of the fun has gone out of student living. I make no apology for using the term “fun” because you will never again be as carefree as you are today. Rents have gone through the roof, college fees are ever increasing, and funding for your colleges has been cut by millions. Despite all of this, the government still manages to roll out pet projects such as the current drive for technological universities. How is the establishment of underfunded technological universities going to make your life better or more bearable?

Of course you were promised some hope regarding the future funding of higher education. The higher education funding working group was to have its report published by the end of 2015 – but where is it? It is just possible that it will not provide the hope you have been looking for. It is just possible that the next government will introduce a funding model for higher education that will have you in hock for half your life – paying back fees through a student loan scheme. Where will the issues pertaining to higher education be dealt with in the general election? Who will engage with individual politicians on these issues if you don’t? You may argue that USI will advocate for higher education because that’s their job. I, on the other hand, would argue that unless you get off your posterior to support your union, it will not get the traction it needs. Folks, it’s time to wake up and smell the coffee – political action is a function of the noise surrounding the issue.

So what can you do apart from supporting the “get out and vote” campaign? You could bring together a number of your friends and set about drafting a list of the issues that concern you. Get each member of your group to draft an email setting out the issues and submit it to all political parties or groups. You can find the direct email address of every single Senator and TD on www.oireachtas.ie.

Verbal answers are not worth the paper they are written on, so you must get an answer on paper to be able to hold any politician to account.

However, it is not enough to seek answers from political parties. You need to localise the questions, and you need to put candidates under pressure to make them a part of your issue. Verbal answers are not worth the paper they are written on, so you must get an answer on paper to be able to hold any politician to account. The only way to achieve this is for each member of your group to ask the same questions of all candidates running in the place where they vote. I attended the launch of Smartvote, a new website app labelled “the Tinder of politics”, which will match you with political candidates that best share your views. Use this to engage with the candidates, drill down into the tough questions, and make sure that you get real answers. You have already organised debates in Trinity that will put politicians on the spot to deal with student issues. Last year in the UK, the power of the student vote gained and lost seats for every major political party in the general election. Individually and collectively you have the power to make a difference, just as your parents and grandparents did in the 1960s and 1970s. You have already shown that you can change hearts and minds and that you can influence change. So be sure to give your voice a vote on general election day 2016. Vote and be heard. You deserve it.

Gerard Craughwell is an independent Senator on the Educational Panel and was the President of the Teachers’ Union of Ireland between 2012 and 2014.