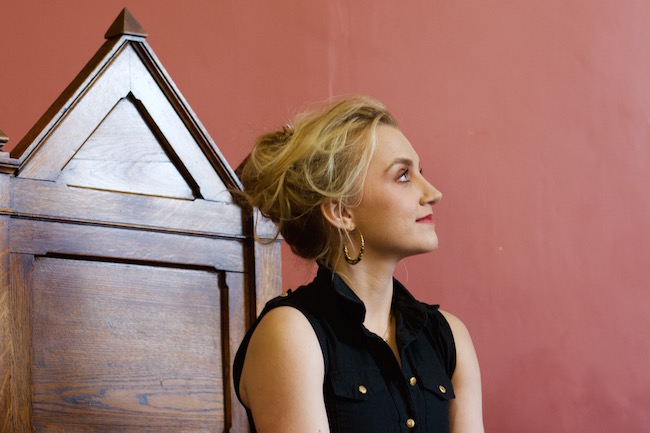 Anna Moran for the University Times

When actress Evanna Lynch, who played the wonderfully whimsical Luna Lovegood in the Harry Potter series, walked into the room, you could feel the excitement building in the crowd. “It feels like I’m on trial, damn. What’s my crime?”, the actress joked as she walked past the eager crowd. Lynch immediately appeared comfortable and approachable, setting the tone for the remainder of the session.

First of all, she was presented with the Burke Medal for Outstanding Contribution to Discourse through the Arts by the College Historical Society (the Hist). This award has, this year alone, has been presented to Dan Brown and Robert Sheehan. She graciously accepted this and moved on to the topic of the session: veganism.

In her speech, Lynch presented an argument for going vegan. She began her talk by explaining the environmental reasons for veganism. She cited animal agriculture as being the primary contributor to “greenhouse gas emissions, world hunger, deforestation, species extinction,” as well as others. She believes this is an issue “you cannot afford not to address” due to the adverse effects of over consuming meat and animal products. She then went on to explain the reasons she went vegan.

She explained that the environment is not the reason she made the decision to cut meat and animal products from her diet. Instead, simply put, she believes that “killing and eating animals is a betrayal of our own core humanity” and that “killing an innocent goes against our nature”. From this point, her argument looked at history, evolution and the reasons consuming meat and animal products continue to be the norm in our society. Finally, she urged the audience to “check [that their] practices align with [their] principles”.

At the end of her speech, she half-jokingly mentioned that her father warned her that she would probably be heckled and booed when speaking on this topic. This was not the case, as the crowd listened cautiously and subsequently asked insightful questions during the Q&A session.

It was then time to open the floor to questions and, with this announcement, a few hands immediately shot in the air. The first few questions were related to veganism, with a fan asking when the turning point was for Lynch and another member of the audience wondering if the actress had any advice in terms of recipes or making the transition to being vegan.

The inevitable shift from a focus on Lynch’s beliefs on veganism to her role in the Harry Potter series came when a fan asked: “Shifting from animal fears to human fears, did you have any fears about playing that role in Harry Potter?”. The audience as well as Lynch immediately broke into laughter, and Lynch responded with saying that “there was no right way to make that transition, was there?”, well aware that the crowd was interested in hearing about her role as Lovegood.

Lynch was also questioned regarding the newest addition to the Harry Potter franchise, the stage production of Harry Potter and the Cursed Child. The session finished with Lynch answering one final question about the positive impact Lovegood has on fans and readers in terms of being proud of who they are and accepting themselves. She ended the session by saying: “That lovely message of ‘I’m weird but I’m ok’, you know. I’m happy to spread that, and I’m glad she’s such an advocate.”