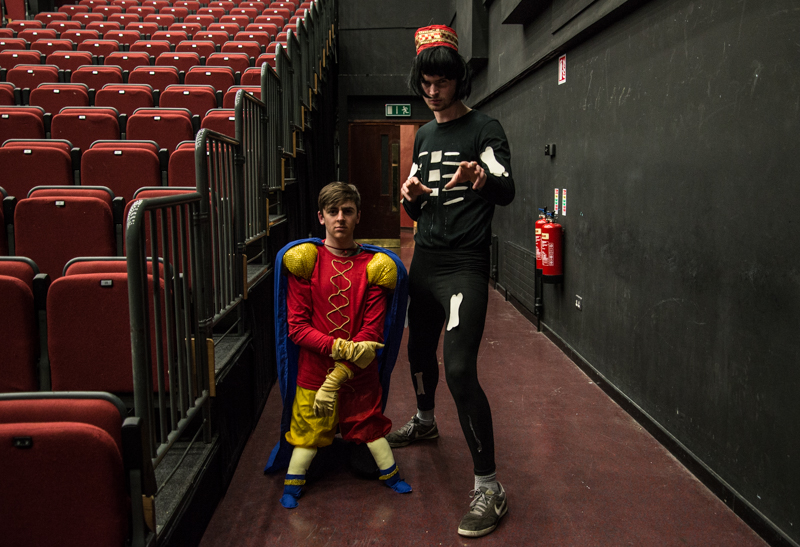 There’s a reason that the Trinity’s Vincent de Paul society (VDP) pantomime packs out the house every year, and it’s not because VDP’s committee seems to make up half of the college or because the families of the cast come to cheer, but because going to see the panto is one of the most fun and genuinely entertaining things that you can do in your time in college.

This year’s show, directed by second year BESS student Ciarán Parker, was a very Dublin version of Shrek – a version that somehow managed to remind us all the importance of passing our exams, of applying Cocoa Brown tan correctly, and of avoiding Joan Burton. Within the first five minutes the stage was packed with energised children performing the kind of rigorous dance number typically reserved for the finale of a performance, and it was this energy that set the tone of the rest of the night.

While the audience may have been transported to the “magical land far away of the swamp”, the show was always rooted in the city and the community that built it. The movie’s magical mirror was replaced with Jack Natin’s best Daithí O’Sé impression as he hosted “the Rose of Swagtown” – the new name for the town of Duloc – and President Martha Shackleton’s Dragon threatened to ban a wandering Donkey over “to the North side”. One of the audience’s biggest laughs was in response to one young girl’s dig at UCD, in just one of the hilarious one liners offered by the children who stole the show.

This is the true magic of the VDP panto. The majority of the cast – made up of over 130 people – isn’t Trinity students, but those who take part in many of the society’s activities, including after-school homework clubs and the members of the Trinity Club, which organises weekly activities for intellectually-challenged adults, whose performance got the audience up off their feet, clapping and cheering, as they danced – and even cartwheeled – their way across the stage.

Anything that could possibly be painted as a flaw only served to increase the enjoyment of the night for the audience. Every missed line was turned into a huge hit, and Tom Higgins’s comedic timing as the Fairy God Mammy meant that any issues that arose with the sound equipment was transformed into yet another opportunity for laughter. With all aspects of the show, including sound, lighting, stage design and costume undertaken by students, it’s no surprise to learn that the night has been months in the making – with every aspect, from boulder painting to fish costume, only adding to the night’s appeal.

Particular mention goes to Gavin Davis who, as Donkey, somehow managed to play a convincing Eddie Murphy playing Donkey playing Sandy from Grease, and who managed to pull of one of the greatest, and most hilarious, comebacks from a forgotten line possible. Paul Nolan’s endearing turn as a tiny Lord Farquaad also deserves particular praise for somehow making the audience feel sorry for him as he was slowly dragged off the stage after losing his bride.

To appease any loyal fans of the Shrek movies, all the classic lines were there – “Ogres are like onions” and “In the morning, I’m making waffles!” – but the bold move of replacing much of the popular soundtrack with modern and classic hits only added to the show. Renditions of Mark Ronson and Bruno Mars’s “Uptown Funk”, Adele’s “Hello”, and even Grease’s “You’re the One that I Want” were all met with huge cheers from the audience.

Ultimately, the point of a pantomime is to entertain, and the VDP panto did so in spades. For its entertainment value and the social good that it promotes, it’s a night that deserves more attention from the college community. After all, a panto that manages to include the voice of David Attenborough, a reenactment of The Lion King’s “Circle of Life” and the techno remix of Teresa Mannion’s famous weather warning is my kind of panto.