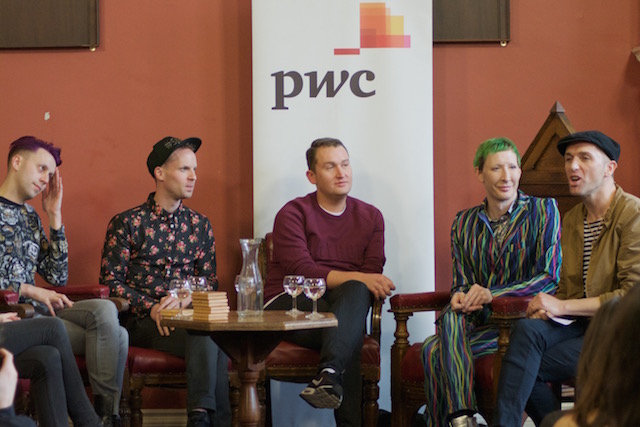 Today the Phil hosted a panel of drag queens, from Ireland and abroad. The discussion was mainly focused on the impact that drag as an artform has had on on LGBT culture, while also exploring the evolution of drag itself. Mike Dolan, pro-president of the Phil council, presented Detox, Katya, Meth, Veda, and Victoria Secret with the Bram Stoker award for Arts.

The queens quickly detailed where they came from and their journey with drag. Veda, a Dublin queen known for her performances in the George and also in the first LGBT youth play, Aunty Ben, spoke about her period in Trinity before dropping out. She also spoke about how drag has changed over the years, explaining how it grew into what it is today. It used to be something that raised money and awareness through competitions like Alternative Miss Ireland (which she won in 1999) into being something that inspired the anti-bullying scheme that was rolled out to schools by BeLonGTo. She also interestingly spoke about the magic of drag in allowing trans people to use it as a form of discovering that they identify as a woman.

After the introductions from the queens, Dolan spoke about how drag had not been a mainstream thing up until recent years. The rise in popularity was credited to the explosion of RuPaul’s drag race, where two of the guests, Katya and Detox gained their success from. Without hesitation, Detox had disagreed with this and continued to say that, while it’s not more mainstream, “it’s a lot more accepted”. Katya assisted Detox by commenting further that “it’s not mainstream but it is bigger.” The access to drag on television is not mainstream because it is not on any main network channel, but instead it has become bigger because of streaming sites such as Netflix.

Dolan’s second question referred to what drag brings to culture, such as lip syncing and other talents, and whether queens get enough credit for it. This proceeded to move the topic of discussion into that of American pageantry for drag queens, but also brought to light the question of how much is too much? However, it was mentioned that pageantry can destroy the point of drag as it has always critiqued mainstream culture. Katya even acknowledged that the pageant system is almost “anti-drag.”

After the conversation slowed, Dolan opened the floor to questions to which I asked the first question asking can women be drag queens or do they believe that women can only be drag kings, and men can only be drag queens. Detox responded with one of RuPaul’s famous lines “we are all born naked and the rest is drag,” and that there is no guidelines. A woman can live the fantasy that she wishes to pursue and if she wants to have the wigs and the nails she is able to have them. Katya, in agreement, spoke about what she was wearing and how it was “boy drag,” and how it could be a bit more exciting before shadily pointing at Detox who was wearing a mixture of colours and textures, a lot more exciting than Katya’s floral shirt.

A question was asked surrounding the controversial ban of drag in Glasgow’s Free Pride, which was an attempt to create a free and safe space for the trans community. However, the banning created chaos within the LGBT community. Meth’s response that “life doesn’t come with a trigger warning”, seemed to resonate with the other Queens. The general consensus was that even though the process of banning drag was with good intentions in mind, it did not work when put into practice.

The final question was on whether or not they felt the need to be political. During the campaign period for the marriage equality referendum drag queens had such an impactful voice, especially Panti Bliss who had a huge impact on the yes side. “We have a voice that people listen to,” Victoria Secret said, who had remained relatively silent until then. Veda said that when it comes to being political she prefers being political “as a citizen, not a drag queen.”