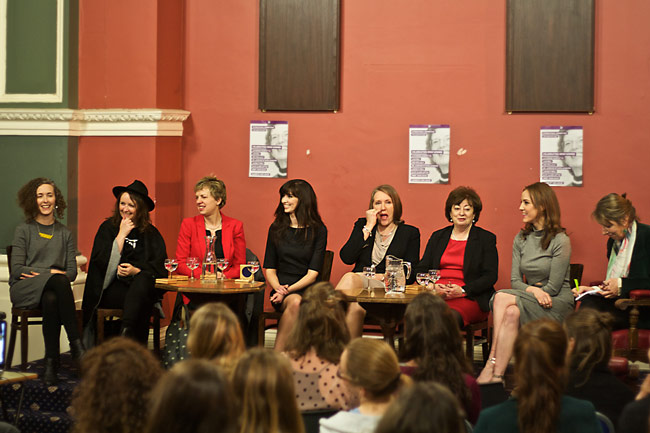 Paige Reynolds for The University Times

Recently, Trinity has seen no shortage of inspiring women gracing its cobbled grounds. But this International Women’s Day, Trinity College Law Society came out trumps with the awe-inspiring panel of eight women to mark the occasion. After all eight were presented with the Trinity Praeses Elit award, the atmosphere was set for what became an evening of female power and nuanced discussions about new-wave feminism, the double edged sword of social media and ultimately, what it means to be a woman in Ireland today.

Ainé Lawlor, prominent RTÉ journalist and broadcaster, led the discussion which started with a frank discussion from Lian Bell, freelance set designer, about the importance of her involvement in the #WakingTheFeminists movement. She noted the movement sparked “this tiny little trigger that was ‘I’m not just going to talk to my friends. I want to speak publically.’ It was being able to step forward and saying that isn’t right”.

The #WakingTheFeminists success story subsequently fed into a broader discussion about the pros and cons of social media for women and for the younger generation as a whole. Una Mullally, the prolific Irish Times columnist, preached the positives of this “virtual solidarity”. She noted that this “beautifully fractured” new-wave feminism means “a lot of things that are happening start as micro acts, a lone woman or a gang of women, speaking up against it and finding this kind of solidarity which can travel internationally.”

Academic Dr Aoibhinn Ní Shuilleabháin added to Mullally’s comments, recalling the movement among women in STEM subjects which started as a backlash to comments from Nobel Prize winner Tim Hunt, who said it was difficult to work with women in labs, saying that they either fall in love with you or they cry. The response was an outpouring on social media of female scientists and engineers posting selfies purporting the message of “women are doing it, and it’s not a big deal” which is hugely important for the young women of today. However, after the discussion on the role of social media quietened, the panel agreed that ultimately, these discussions have to be taken offline to really reach people.

Lawlor subsequently directed the discussion toward the role of women in politics and the legal profession. Prof Ivana Bacik praised the passing of gender quotas and the whole panel agreed that despite the continued underrepresentation of women in the political field, the women that are there are very high profile. Catherine Murphy, joint leader of the Social Democrats, noted that in the field of politics women simply must keep involving themselves. “If you look at our system, it was designed in Westminster, it was replicated here, it was designed by men … women in politics have something very positive to offer.”
While Claire Loftus, Director of Public Prosecutions, argued that in the legal profession it’s really never been a better time to be a woman, noting “we might never again have as many women in criminal justice system than today”.

The panel was rounded off with some remarkably inspiring words about what being a woman meant to each panellist. A number of the panel spoke about the sense of female solidarity with Louise O’Neill, commenting “the shared experience of what it means to be a woman in a patriarchal society is invaluable”. Though Bacik noted that lack of reproductive rights was still a huge issue, the panel agreed that change is coming, with Mullally noting that the best thing about being a woman is confronting those challenges”.

Though the panellists had thus far been clear to comment that the situation for women was changing, the questions from the audience revealed that being a woman today still often meant struggling to garner the same respect as their male counterparts. Questions of maternity leave for both men and women remain unsolved, they said, and the battle to involve both men and women equally in discussions of feminism is yet to be won. In response to a question about everyday misogyny, O’Neill remarked “it’s never just banter, it’s never just words, you have to call out every piece of misogyny you see”.

One particularly salient question raised the issue of the mandatory consent classes Trinity is hoping to offer and how to counter the backlash from the older population. All panellists seemed to support such measures, but noted that the older generation often simply does not understand their vital importance and that generational barriers will be difficult to overcome. Ní Shuilleabháin even noted that “a word like mandatory is likely to make you flinch”.

The panel ended with a slight disagreement among the women about whether women today should be angry. Some of the panel argued that being women should not foster anger but Mullally noted “people spend a lot of time being polite. Nobody ever gives out to men for being angry. Politeness can get you places, but anger can also get you places so I think anger channelled usefully is a very positive thing”.

All eight women were hugely inspiring and their raw strength as they stood united on such an important day undoubtedly left the audience feeling empowered much beyond the walls of the GMB.