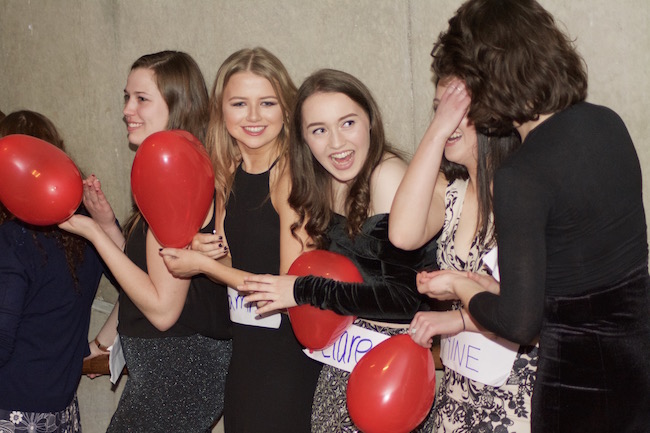 Last night, Trinity Vincent de Paul presented their annual Take Me Out to a full Thomas Davis theatre, where an energetic crowd anxiously awaited the hysterical production to begin. The night began with a hilarious short film, set to the tune of Bonnie Davis’s “I Need a Hero”, which saw the crowd break into applause before any candidates even entered the stage. The hosts, Hugh Fitzgibbon and Ciaran Parker, had high expectations for the evening, with particular hopes for “violent shifting” afterwards in Doyles. The pair brought an energy to the room that quickly ensured that all members of the audience were enthused from the off.

As the show opened, 23 ladies “who can’t find love” lined the walls of the theatre, with love heart-shaped balloons in hand, ready to be popped when their interest in the current candidate dwindled. The first contestant was Michael Jordan, a fresher hailing from Roscommon, who has apparently made quite a name for himself in Halls. Although Jordan’s entrance proved promising, his interview soon proved otherwise. It seems that “I put the STD in Stud” is not what the young women of Trinity wanted to hear. Jordan also admitted to using a rugby ball in the bedroom, much to the confusion of Fitzgibbon and Parker. His close friend, Cillian, was called down to the stage in an attempt to sell Jordan to the remaining four girls in the game. However, after some questionable photos and screenshots were projected onto the stage, the final four balloons were very quickly popped.

Padraic Rowley, Ents Officer-Elect, was the second contestant of the night. Rowley responded to the reception he received from the hosts, who didn’t know who he was, by saying that he had “just followed the cans”. During the interview segment, when it became apparent that Rowley’s favourite lubricant was garlic dip, the balloons suddenly started to pop, with one of the contestants claiming, surprisingly, that it just wasn’t her style. His performance redeemed him somewhat as he proceeded to astound the audience and the contestants by playing the guitar with a can of Coke. This hidden talent even got him a date with Mairéad, the choreographer for next year’s VDP Panto.

Caolán Maher was the next contestant to take to the stage. Maher rose to fame after the infamous can incident, an event which inspired multiple can puns throughout the course of the night. Describing himself as an “earth science student who likes rocks” won him multiple favours and the majority of balloons remained intact. Once again, the can puns rolled on as the two hosts cradled a crate of Miller between them in the previously filmed interview that was played during Maher’s set, in which the former ents candidate promised that he “would get his bit next year”. Maher’s mother was present in the audience, and proved to be one of the most active members of the crowd. Indeed, when Fitzgibbon popped contestant Karen’s balloon, she quickly demanded that she have another one given to her. “Mammy Caolán” was then asked to pick her ideal woman for Maher, to which she asked her son: “Caolán, what do you think? Should we just take them all back?” Maher’s talent for the evening failed to disappoint, with his impressive talent of multiple animal walks – mimicking frogs, lizards, sloths and monkeys – stealing the show. With more choice than either of the first two contestants, there was plenty of narrowing down required to find Caolán his dream woman. When Caolán was forced to make a decision between the two lovely ladies, he asked the crowd to help, to which his mum shouted at him to “trust [his] gut”. The end of the night saw him dateless, as his ideal woman was announced and the two remaining girls popped their balloons on the spot.

The next participant who sauntered in was well-loved VDP volunteer, Donal Lowry. Commenting on his glitter eating, Áine Fagan said that she wasn’t surprised because he “was sparkling”. During his interview, Lowry told the audience that his trick to find that lucky lady at College balls was hiding a naggin in a “very special place”. He removed his blazer to reveal a tie-dyed wifebeater, and subsequently told the audience that tie-dye was his favourite hobby. He proceeded to do a dramatic reading of Fifty Shades of Grey, which was well received by English student Rebecca Murphy. None of the contestants proved to be a suitable match, however, as Lowry ran toward his true loves, Eoin Kelly and Eoin Higgins, after all balloons were popped.

The final contestant was Tom Higgins, who played the fairy godmother in the VDP Panto earlier this year. During his previously recorded interview that played on screen, he shared that if he had to chose an eighth wonder of the world, it would have to be either his eyes or his hair. The audience then participated in a singing of Justin Bieber’s “Love Yourself”, much to Higgins’s despair. Áine, one of the contestants, then stated that “he could pop her cherry but not her balloon”. For his talent, Higgins gave a dramatic reading of 50 Cent’s “In Da Club”. This seemed to pull on everyone’s heart strings, as he had the most choice of any of the previous contestants when it came to girls. As he popped balloons, he left himself with the very difficult task of choosing between Louise Mulrennan and Clare McCarthy. His tiebreaker question seemed innocent enough at the start: “Do you like Imagine Dragons?”, to which Mulrennan instinctively clapped the intro of Radioactive, but the crude turn he subsequently took resulted in both popping their balloons rapidly leaving the stage.

The night finished up with a reminder to not leave one’s cans behind, “as this is not Caolán’s gaff”. If the crowd’s cheers and impressive participation was anything to go by, the night was a success, with all proceeds, as usual, going to the worthy cause of St Vincent de Paul.