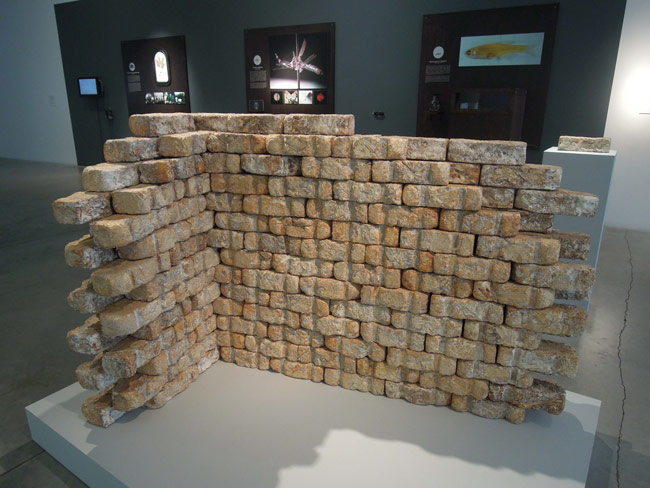 A Mycotecture brick wall – literally, a wall that is made out of mushrooms.

There is no doubt that global eating habits and farming methods urgently need to change. It is estimated that agriculture is the biggest contributor to climate change. And while the world produces enough food to feed all seven billion people, 805 million people go undernourished everyday.

Starting from the premise that agriculture must (and will) undergo dramatic transition, the new exhibition in the Science Gallery explores new possibilities in food. Some of the exhibits showcase innovative technologies that are now undergoing trial and which may very soon became an integral part of the industry. Others are more speculative pieces, which challenge us in startling ways to re-evaluate our attitudes towards food and its production.

One of these speculative pieces is “Second Livestock”. The technology behind this piece is a virtual reality simulator devised to give chickens the illusion that they are free-range. Little chicken-sized headsets and headphones are on display. Visitors are encouraged to test the technology themselves, which launches them into a fully-navigable virtual barn where you can interact with other chickens. Obviously, the whole thing is a massive spoof but it prompts us to contemplate the fate of battery-reared chickens and solutions to alleviate their misery.

Other exhibits are more than speculative but just as disturbingly thought-provoking. For instance, “The Ghost Chilli”. This chilli is the second hottest chilli in the world and so hot that to simply touch it would be to burn our skin. But this chilli is not one for eating – it has been developed by scientists at India’s Defence Research and Development Organisation into an ingredient for non-lethal hand grenades. Clearly, not all the future food possibilities are culinary, as may well become clear to future anti-government protesters in India, when they are violently dispersed by chilli napalm.

“Field Test” makes clear that food has many more uses than for eating. Another food technology that is on view is a Mycotecture brick wall. Literally, a wall that is made out of mushrooms. The bricks that comprise the wall have actually been grown out of a living fungus. And the potential of such a material seems thrilling: a cheap solution to the national housing crisis, to name but one possibility. But the curators are keen to downplay the capabilities of Mycotecture, wary of creating another “hype cycle”, a hysterical euphoria that lauds a technology as world-saving before being disappointing.

While there is indeed doom and gloom in the exhibition, namely the exploration of the near-extinction of the bumblebee, there are also some surprisingly sunny exhibits. One of these is “Eco Opportunism”, which showcases climate change’s winners. Among these are “Nordic Wine”, so-called “New Latitude” wines which have been made possible by a rise in global temperature, now that it is possible to cultivate wine grapes in Scandinavia. Another winner is the jellyfish, which has thrived due to warming oceans and overfishing of predatory species. Edible jellyfish have long been delicacies in Asia and the exhibition questions whether we will soon gastronomically exploit this booming population.

While many exhibits, such as “Protein Futures” and “Seed Boutique” dwell on pioneering food developments, one of the most interesting pieces in “Field Test” explores the existing agriculture industry. “Our Daily Bread” is an award-winning documentary which reveals where exactly our food in Europe comes from. The enormous, nearly surreal, landscapes of mass-scale crops, patrolled by gigantic machines seem like something out of science-fiction.

But this is what the film seeks to show us, that this is our reality and not some dystopia. The sensation of watching slaughtered pigs being delivered across a conveyor-belt, a creepily balletic process, is particularly eerie. There is no commentary in the documentary and the onus is on the viewer to formulate their opinion about our methods of food production. The soundtrack is the “booming, slurping, and hydraulic breathing of the machines … only the screeching of chickens is louder.”

This documentary, which comes at the end of the exhibition, seems an apt way to conclude a fascinating exploration of new food technologies. It makes us contemplate what exactly is wrong with our broken agriculture industry and, by doing so, to appreciate the great importance of all we have seen of future farming.