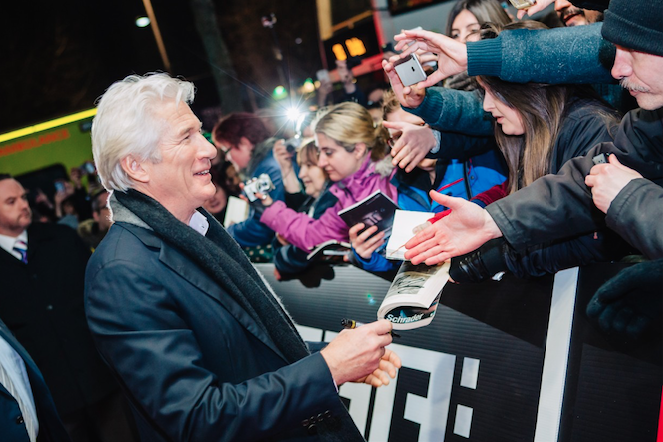 Audi’s Dublin International Film Festival rolled out one of its final spectacles in the Savoy Cinema last Friday night. Throngs of onlookers elbowed their way through, scrambling to the barriers of the red carpet on O’Connell Street. Those on the upper deck of the number 16 bus peering through rush-hour condensation and worn plexiglass for a glimpse of a star.

The festival has attracted numerous film and TV stars since its inception in 2003, but the impending arrival of Richard Gere resulted in palpably frenzied bursts of anticipation. At sixty-six years old and with a varied repertoire of leading roles both in arthouse productions like American Gigolo to romcoms like Pretty Woman and An Officer and a Gentleman, his star power remains as tangible as ever. The man himself arrived on time, to a roaring crowd, for a special screening of his 2014 film Time Out of Mind, a riveting and unapologetic depiction of vagrancy in the urban jungle of Manhattan.

Following the screening in a packed Savoy theatre, Mr Gere steps out on to the stage. With an astonishing ability to command such a vast room, he expresses himself with an almost meditative presence. Setting his gaze on distant spots on the far wall and occasionally the ceiling, he discusses his performance in a wonderfully articulate and candid manner. He reflects on Time Out of Mind, a film he executively produced and which was directed by Oren Moverman. The plot is relatively straightforward in that it is virtually nonexistent, an element he maintains is essential to the outcome. The broad story arc follows George, a down-and-out seeking solace in his daily life, redemption from his estranged daughter, and most essentially of all basic refuge in the unforgiving vagrancy environment of New York City.

With a discernible astuteness, Gere reflects on the absence of a set plot as a welcome change and indispensable instrument. He notes the shortcomings of commercial filmmaking, the obsession with an established, contrived plot with over-developed characters. The removal of an overarching narrative allowed the human element to dominate, as he points out: “Sometimes a back story leads you in the wrong direction.. a story is not who we are. We don’t feel them.” In a sense, many of us are acutely aware of these back stories – the subtle demise into homelessness as a result of redundancy, drugs, divorce. But rarely do we glimpse stories of survival, of simply being. His commitment to the film is admirable, with the entire process from idea to fruition encompassing a timespan of twelve years. Yet he strays away from scolding the slow development. He insists the meticulous creation aided in stripping it back until nothing was left but the bare bones of the story, maintaining that time was needed “to simplify… to distill it.”

Time Out of Mind is defined as a claimant on your senses, inextricably linking the audience on an emotional level to the characters on screen. Gere acknowledges the emphasis on sound as integral, exemplified in the prevalence of an overlap in secondary sounds such as conversations, sirens and chatter. This “secondary voice” emerges as the dominant narrative, imposing itself over the characters emphasizing the belittlement and ignorance vagrants face on a daily basis. Gere feels strongly about the need to create a truthful depiction of homelessness, commenting on how he felt artifice in most other documentaries on this subject. The advent of long lenses used on New York streets meant that for the first time in his career the veteran actor was existentially alone, noting the absence of “the cameraman, the boom guy, the director, the script girl”. The realist vision translated into a complete eradication of this conventional footprint of filmmaking. Tracking shots are rare, while reflective, artsy shots dominate scenes. Moverman demonstrates his particular knack for placing the camera in a position with an object in the foreground such as iron gates or barbed wire to further convey the sense of isolation: a consistent barrier between citizens and these roaming, nameless men.

Gere requested a meeting with Focus Ireland on his visit to Ireland, commending their work in alleviating the Dublin homelessness crisis. He maintained that his performance was not a struggle for him in any capacity, but was overjoyed with the reception to highlight the epidemic. The aforementioned soundtrack of background noises particularly emphasised the fragility of the vagrant life. A fellow boarder in the shelter with a persistent cough, grates on the other men’s minds as a pernicious threat. The sequence resonates deeply, something as trivial as a coughing fit could put the fear of God in these men, confined like “rats in a cage”. Legislative and administrative barriers to acquiring a social security number demonstrate the vicious cycle these men face in attempting to get back on the straight and narrow. An acquaintance of Gere’s character echoes the flaws in the system, saying: “That which is crooked cannot be made straight.”

The absence of a crew, which would naturally draw attention and curiosity, resulted in a new experience for Gere. He notes how he relaxed into a new kind of acting. Reflecting on a particular sequence shot in Greenwich, he remarked modestly on the notable lack of attention from onlookers, which he admitted was alien to him. Furthermore, he recognised a pattern where people were making decisions about him, two blocks away. It was an experience so far removed from his perception of the world that it left a grave impression. He was not invisible as a homeless man, as many would believe, but rather he describes it as “a black hole”. To passersby a homeless person is clearly visible, but they “are afraid and choose not to engage” – a stigma far worse than the luxury of invisibility. Time Out of Mind succinctly captures the daily occurrences of a homeless life in an urban wasteland. It strays far from self-indulgence, in fact opposing commercialism. We witness a continuous sea of averting eyes, darting heads and retracted glances. By virtue of the vision, we are placed in the position of both the oblivious crowds and the vagrants themselves – gripping the audience with the crippling notion that it is a fine line, the ease of which we can slip into either category.