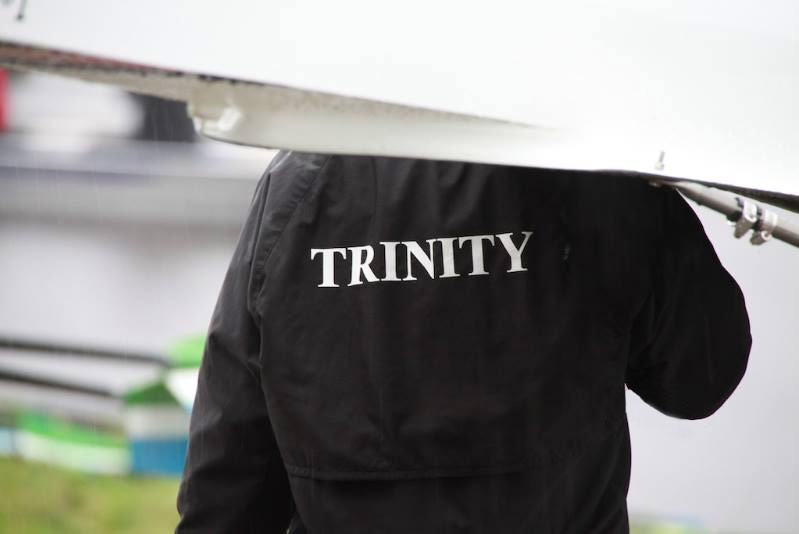 The sun was shining for a brief two-hour window this morning, but that was all the time the rowers from Dublin University Boat Club and University College Dublin Boat Club needed to settle the 2016 Colours Rowing races. For the first time in the College’s history, Trinity were defending champions in each of the four events – following their clean sweep last year – and the women’s novice team came into the first race of the day, the Sally Moorhead, looking to pick up where things left off.

Anticipating a surge in the spring tide, the organisers moved the starting times forward for each race so that teams weren’t at risk of hitting one of the eight bridges they passed under between the starting point at O’Connell Bridge and the finish line at James’s Gate. The change in timing didn’t diminish the size of the crowd that had turned up for the day’s action. The sight of hundreds of cheering students gathered on the banks of the Liffey and marshalled by the Gardai drew a lot of attention from curious onlookers, many of whom were conspicuous in their St.Patrick’s day paraphernalia.

The banks and bridges lining the route were so packed that the use of bikes to follow the races was prohibited by Gardai this year and instead six open top buses were specially provided for those wanting to support their sides stroke for stroke. Other fans found creative ways to keep pace with the boats, and seeing people skate or scoot past on their way to and from the finish line was a common occurrence.

Trinity’s novice women were unlucky to lose the Sally Moorhead Trophy after a mishap with the timing of a stroke slowed their start. It was also a very determined effort from the UCD team, who were perhaps inspired by the chants from the buses looming over them on the river bank. The Trinity men’s novice team struck back to take the David Quinn Trophy in the second race, finishing with a comfortable lead.

In the Corcoran Cup, the main women’s event, both sides battled the current to line themselves up under O’Connell Bridge while one of the organisers in a motor boat used a megaphone to get the crowd going. While UCD were in the less favourable south station, hugging the Trinity side of the river, they got off to a fantastic start and the experience of rowers Eimear Lambe and Siofra Bennett helped them to maintain a consistent pace all the way to the finish line and end Trinity’s hopes of retaining the title.

Trinity were the slight favourites to win the Gannon Cup again this year, coming into the showdown off the back of a great season in which they put in a dominant display at Erne Head of the River. Alex McElroy and Josh Norton came into the lineup along with Gearóid Mahon to complete a formidable men’s eight. However, with UCD racing on the north station the advantage was always with the boys in light blue and so it proved as the race developed. UCD were completely in the zone as they worked in unison to pull away from their fierce rivals and although Trinity attacked hard towards the end of the race to close the gap, the fans seemed to know it would be UCD’s day even before they crossed the finish line, leading by a length.

The results constitute quite a turnaround from last years historic victories but it is possible to be spoilt with success and Trinity can take heart from the strong showing of their novice teams who represent a great opportunity for the college to bounce back next year.