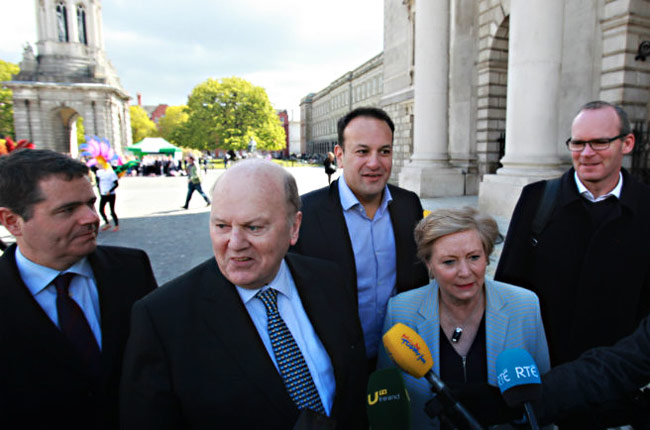 Fine Gael negotiators in Trinity last week. The Provost's House was used for discussion between Fianna Fáil and Fine Gael.

Proposals contained in the draft of the programme for government agreed between Fine Gael and independent TDs are to further delay decisions on higher education funding, with a cross-party Oireachtas committee set to “review” the Cassells report when it is eventually published.

The report, which was finalised in early March by the government higher education funding working group and sent to the Minister for Education shortly after, was originally due to be published by the end of 2015.

As with Fine Gael’s general election manifesto, the programme for government fails to commit to any funding model for higher education, but instead makes this the responsibility of the committee, which, upon review of the recommendations, will “outline a proposed funding plan for this sector”. The Cassells report, despite being the second such report on higher education funding in the lifetime of the last government, was commissioned in 2014 with a view of solving the funding crisis, which a state body last month said had the sector at “crisis point”. The delay in its publication and action on its recommendations will be seen as further evidence that the crisis in higher education is being ignored by political parties, something which the Irish Federation of University Teachers on Wednesday said was “startling”.

Wednesday also saw other unions, and a member of the working group, call for the immediate release of the report.

The document, obtained by the Irish Times, outlines the Fine Gael-led minority Government arrangement between the two parties as well as the policy points agreed upon as part of that arrangement.

In parallel with the review of the Cassells report, an “examination of the efficiency and operation of SUSI” will be conducted, “including the potential of providing SUSI liaison personnel in each region”.

The document states support for new flexibility and “earned autonomy” within universities, calling for “transparency and new accountability agreements” and for universities to “set their own staffing needs, hire the best lecturers, automate routine processes and adapt work practices to suit staff and student needs”.

The document places a focus on access to higher education, with a commitment to increasing financial support to postgraduate students, “with a particular focus on those from low income households.” It also commits the government to commissioning “an independent examination to identify the supports and barriers to accessing higher education for lone parents, and examine measures to increase participation.” The results of this report are to be published before the 2017 Budget.

It states support for an increase in the number flexible courses available, “giving people the opportunity to attend courses part time, during evenings, in the summer and at weekends”, as well as committing to improving adult and community education, “empowering those who did not get an equal opportunity for education in their youth”.

The document also expresses support for the creation of Technological Universities, the introduction of courses in which students spend their third year working in industry and reiterates the commitment of the former government to doubling the number of apprenticeships by 2020.