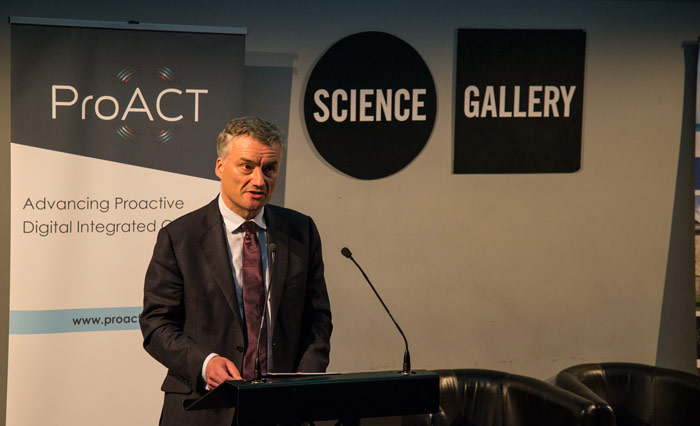 A new digital health research programme based in Trinity, “ProAct”, was launched today by the Minister for Mental Health and Older People, Helen McEntee. The programme, which aims to allow older people with chronic diseases to self-manage their conditions using new technology, has received €4.87 million in funding from the EU’s Horizon 2020 programme.

Developed in partnership with a range of research institutions, international technology companies and members of the healthcare industry, the programme, which is led by the Trinity Centre for Practice and Healthcare Innovation, will aim to provide digital, home-based care that patients can access via a tablet, smartphone or computer.

The programme has attracted considerable support from across the EU, including health technology heavyweights like Phillips, which currently tracks 275 million patients worldwide, and Home Instead, which operates across nineteen countries.

Speaking at today’s launch in the Science Gallery, McEntee emphasised the potential of technology to “modernise” the way patients are treated. Referencing the stress that is increasingly being placed on health systems internationally by ageing populations, McEntee praised the new programme as providing an “excellent model” for how EU member states can “work together” with industry and private enterprise to develop solutions to the biggest challenges facing states today. In the EU currently, 70 per cent of healthcare costs are spent on treating and managing such chronic diseases.

Ireland is currently the second-largest recipient of European Research Council (ERC) funding, with Trinity no stranger itself to working on large-scale projects in the healthcare sector. The Irish Longitudinal Study on Ageing (TILDA) has since 2009 collected and analysed data on ageing in Ireland, while more recently last November Atlantic Philanthropies awarded €138 million to Trinity College Dublin and University of California, San Francisco (UCSF), to establish the Global Brain Health Institute, the largest such donation in the organisation’s history.

Speaking at the launch, Provost Patrick Prendergast, argued that “Ireland now provides an example across the EU of how to approach funding applications”. Referencing the scale of the ageing crisis facing Europe, and the escalating cost of treating patients with numerous chronic illnesses, Prendergast described himself as “proud and delighted that Trinity is coordinating this important project”.

Alluding to the upcoming referendum on Britain’s membership of the EU, Prendergast expressed his hope that such partnerships can continue in the future, and that such “success stories” like ProAct could be used to challenge the negativity that often surrounds the European Commission.

Two trial sites of 60 patients, based in Louth and in Ghent, France, will focus on applying new technologies to the prevention and treatment of chronic diseases like diabetes, heart failure and dementia, with a further trial planned to take place in Bologna, Italy, in 2018. It is hoped that by 2019 the system will be able to be replicated across a range of EU member states, and able to care for and treat patients with a range of diseases.

The coordinator of the project, Trinity’s Dr John Dismore, highlighted the difference the project could make to the lives of patients. Emphasising that “our goal is to tackle society’s problems”, he argued that importance of a more proactive approach to patient care.

The project “started with a cup of coffee in the Science Gallery. It’s amazing what a cup of coffee and a few great minds can do together”, he said. By using the data collected from patients, and working with technology companies like IBM Ireland and Phillips, the project will be able to rapidly grow in scale to treat patients across Europe.

Speaking to The University Times, Dinsmore said: “Our health systems are based very much on reactive treatment and per patient, so that’s when individuals become acutely ill. But because of the pressures that are put on the health system we have to move to a very much proactive and preventative healthcare model where people are powered to look after their own health, at home, for as long as possible.”

With the €4.87 million in funding, Dinsmore and his team will create a “new digital, integrated care cloud-based system” that will “take information from those technologies into the system, and then through very smart algorithms that we’re creating with IBM, feedback to the individual what specifically they need to know, at a specific point in time to help them manage their condition”.

Commenting on the importance of the project, Dinsmore said: “If you give people their data in a way that they can digest it very easily, and you then give them the tools to understand how to use that data to proactively manage their health, and maybe prevent some exacerbations… then you can see the system having a major role in health services”.

Speaking at the launch, the Director of  Research at Philips UK, Sybo Dijkstra, praised the work of the project so far, stating that “an engaged patient and engaged healthcare consumer is less of a burden to the health system”, and noting how the work of Dinmore and his team is adapting to a world where “care is shifting to a lower cost setting”.