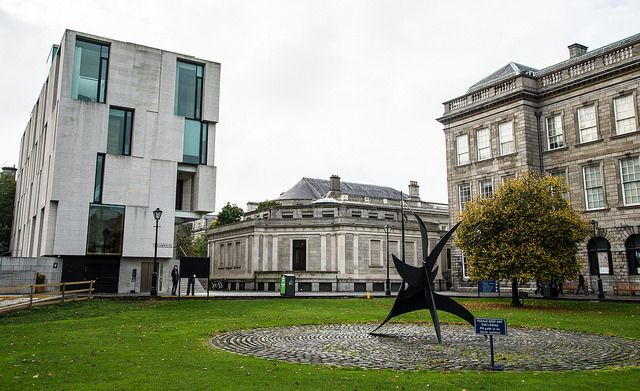 The seminar will take place in the Trinity Long Room Hub next Wednesday.
Sinéad Baker for The University Times

The man behind the Australian loan scheme system, Prof Bruce Chapman, will be the keynote speaker at an all-day seminar on higher education funding, which has been organised by Trinity and will take place in the university next week.

Chapman, from the Australian National University, was the lead author of the Australian Higher Education Contribution Scheme, which in 1989 introduced an income-contingent loan scheme to the country to fund higher education. He has also worked as a higher education financing consultant to the World Bank, as well as a range of governments including the UK, the US and China.

While the loan system in Australia has been held up in recent months as a viable model for Irish higher education to follow, others have criticised the burden of debt it leaves on students. At a press conference on Tuesday, organised by the Coalition for Publicly Funded Education, a group made up of a number of unions including the Union of Students in Ireland (USI) and the Teachers Union of Ireland (TUI), the Australian system faced criticism.

Speaking at the conference, the General Secretary of the Irish Federation of University Teachers (IFUT), Mike Jennings, said that loan schemes are “failing” in England and Australia, and argued that such loan schemes provide an incentive for young people to emigrate.

The seminar has been organised by the Vice-Provost, Prof Chris Morash, as well as the Trinity Research Centre for Cultures, Academic Values, and Education. The day will also see Trinity College Dublin Students’ Union (TCDSU) President, Kieran McNulty and Reid Professor of Criminal Law, Criminology and Penology in Trinity, Senator Ivana Bacik, speak on the issue of higher education funding.

Bacik has campaigned on the issue of higher education funding since being elected to the Seanad in 2007. Speaking to The University Times ahead of the seminar next Wednesday, Bacik expressed her hope that the seminar would contribute to the ongoing debate on how to fund higher education.

In July, the report of the higher education funding working group, commonly referred to as the Cassells report after its chair, Peter Cassells, recommended three options – the abolition of the student contribution and the creation of a predominantly state-funded system, the continuation of the current student contribution charge coupled with increased state investment, and the introduction of an income-contingent loan system – for the funding of higher education.

These recommendations are now being considered by the Oireachtas Committee for Education and Skills, which is chaired by Fianna Fáil’s Fiona O’Loughlin.

Bacik expressed her hope that the seminar would add to the debate around a new funding model for higher education. “Obviously the political difficulty is how that is achieved, how you address the gap between the increase of student numbers and the decrease in public funding allocation”, she said.

At the seminar McNulty will speak about the challenges students have faced since 2008, highlight the union’s opposition to an increase in fees, and emphasise that “more funding is needed, no matter what option is taken”, he told The University Times .

Last year’s TCDSU President, Senator Lynn Ruane, will also speak at the seminar, alongside TCDSU Education Officer, Dale Whelehan, as well as Prof Aedin Doris of the Department of Economics at NUI Maynooth.

It remains unclear whether or not the Education and Skills Committee will bring forward a proposal based on one of the recommendations of the Cassells report. In an interview with The University Times in September, the Minister for Education and Skills, Richard Bruton, said that a compromise on the three options might be possible, acknowledging that in the current political climate, with Fine Gael leading a minority government, “some form of compromise is always going to have to be there”.

The government’s Action Plan for Education, launched in September, gave a timeline of the second quarter of 2017 for when a new model for higher education funding should be decided upon and implemented.

The Provost, Patrick Prendergast, has not outlined a preference for a particular funding model for higher education. However, writing for Independent.ie on the day the Cassells report was published, the Provost stated an income contingent loan scheme could be a fair system, “once the debt is reasonable”.

The Provost has also been critical of the lack of funding the sector has received in recent years. In a joint statement with the President of University College Dublin (UCD), Andrew Deeks, following the latest QS rankings, in which both Trinity and UCD fell, he called for the urgent implementation of the Cassells report: “The political system must now make the difficult choices that are needed to improve the funding given to universities and in the manner in which this funding is distributed.”

At the end of August, the leader of Fianna Fáil, Micheál Martin, accused the presidents of Irish universities and institutes of covering up the impact of underfunding in order to protect their reputations.