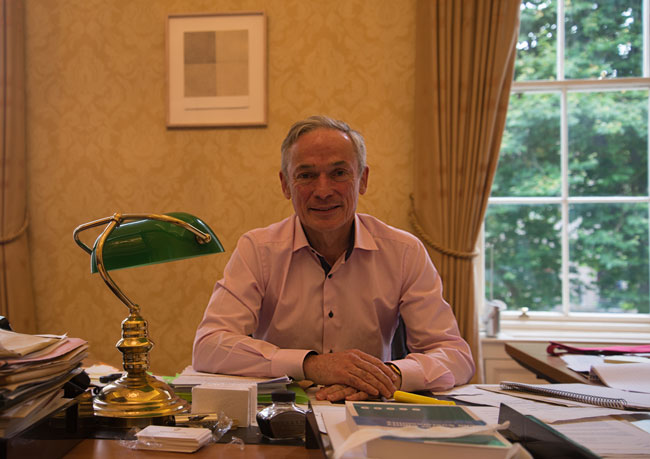 A compromise on the three options for funding higher education put forward in the government’s higher education funding working group, known as the Cassells report, is possible, the Minister for Education and Skills, Richard Bruton, has said.

In an interview with The University Times, Bruton stated that in the current political climate, in which his own party, Fine Gael, is leading a minority government, “some form of compromise is always going to have to be there”. When asked if finding a middle ground between two of the options might be possible, Bruton agreed, stating: “I think politics is always about resolving conflicts.”

“One of the tasks of new politics is to be better at resolving conflict than perhaps we have been in the past. So this is a test of whether we can exploit the strength of a Dáil that is diverse and actually use it to bring the best views of people together in some form [of] consensus that can hold”, he continued.

IMPACT organiser, Joe O’Connor, former President of the Union of Students in Ireland (USI) and a member of the Cassells working group, was critical of the idea of a compromise on any of the reports options when speaking to The University Times on the report’s publication. O’Connor was adamant that the report was not to lead to a compromised solution that might “dilute” the three options outlined in the report. “I certainly would not like to see a scenario where the committee does the work of the expert group again. I don’t think that’s its role. I think its role is to look at the options, assess them and make a choice”, he said.

The decision over which option to choose from the report – the abolition of the student contribution and the creation of a predominantly state-funded system, the continuation of the current student contribution charge coupled with increased state investment, and the introduction of an income-contingent loan system – has been passed to the cross-party Committee for Education and Skills. The committee is chaired by Fianna Fáil’s Fiona O’Loughlin and has members from Labour, the Green Party and Sinn Féin as well as Fianna Fáil and Fine Gael.

While the Green Party, Fianna Fáil, Sinn Féín and Labour have stated support for other options rather than student loans, Fine Gael has not made its position on the options presented in the report clear. When asked about the party’s position by The University Times, Bruton stated: “Historically, Fine Gael has been open to the alternative funding mechanisms that Cassells has talked of, so we don’t come with a closed mind on any of the options. But I think what you need to build here is a coalition of sufficient strength, that there is a consensus that we can get through measures.”

The Cassells report, itself the second such report into options for funding higher education in Ireland since 2011, saw its publication delayed by more than six months, with Bruton taking over as Minister for Education and Skills in May, the same month as the report’s publication. Education trade unions had been critical of the delay, with O’Connor writing in an op-ed for the Irish Times supported by USI, the Irish Federation of University Teachers (IFUT), the Services Industrial Professional and Technical Union (SIPTU), IMPACT and the Teachers Union of Ireland (TUI) that it was time for the “hugely significant report to be put in the public and political domain”.

At the launch of the government’s Action Plan for Education last week, Bruton set a timeline for the committee’s decision to be implemented by June 2017. Speaking about the urgency to The University Times before the launch of the plan, Bruton stated “I think what Peter Cassells said very clearly is doing nothing is not an option, and I absolutely agree with that.” “This isn’t a sort of a theoretical exercise, it’s actually we have to try and make it work”, he added.