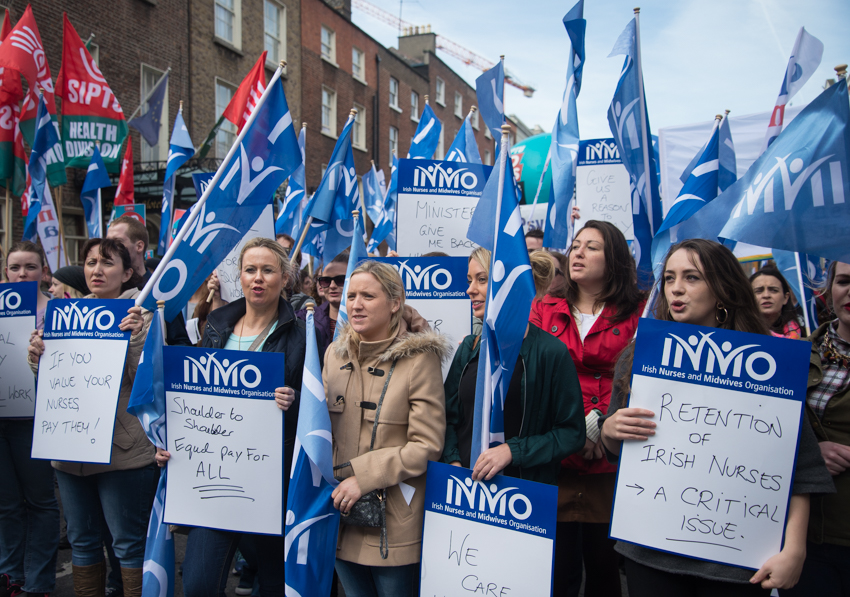 Groups including the Irish Nurses and Midwives Organisation (INMO) staged a protest this morning outside Leinster House to challenge the government’s recent decision not to extend incremental credit to nurses who completed their internship between 2011 and 2015.

Speaking to The University Times, INMO’s Student and New Graduate Officer Dean Flanagan said that the protest took place because nursing and midwifery graduates from 2011 to 2015 “are not going to be recognised for putting their shoulder to the wheel during the worst times of austerity”.

The Psychiatric Nurses Association (PNA) and the Health Division of SIPTU also took part in the protest, with the Union of Students in Ireland (USI) also present.

Flanagan then went on to note that the INMO will be meeting the Minister for Health Simon Harris today to discuss the issue. However the Department of Health and the HSE have “agreed that this is fundamentally wrong and needs to be sorted.”

“It was the Department of Public Expenditure and Reform that did it. We’ve had two briefings altogether with senators and TDs, the feedback has been very very good and a lot of them have now formulated the questions to be put towards the Minister”, he continued.

For Flanagan and the INMO, the situation has become critical as “we lost around 75 to 80 per cent of all the people [to emigration] that graduated during this period, 2011 to 2015”.

“And right now the people who did stay, they might be of a different demographic or they’re the young people who made a conscious decision to stay here”, he continued.

Flanagan also suggested that what the INMO, PNA and SIPTU are asking for is not an inordinate sum. Assuming that all of the graduates from 2011 to 2015 were given their credit increments, including those who have emigrated, the total cost to the Government would be €4.5 million, or €1,300 per person per year, according to Flanagan.

Speaking to The University Times at the protest, Deputy President of USI, Jack Leahy, described the government’s decision as “regressive” and commented that he hoped protesting today would remind the government of the economic importance of investing in graduates.

An online survey of over 600 student nurses across the country by USI in 2015 found that 93 per cent of those surveyed had thought about emigrating, with 80 per cent stating that they felt “voiceless” as a nurse or midwife.

Flanagan concluded by saying that “we’ve had stories today at the briefing where people had 50 people in their year, all of a sudden there may be only four people left in the country, and that‘s what we’re dealing with”.

A number of TDs were present before the protest kicked off, including Catherine Murphy and Roisin Shortall from the Social Democrats, Richard Boyd Barrett and Bríd Smith of People Before Profit, and Gerry Adams from Sinn Féin.